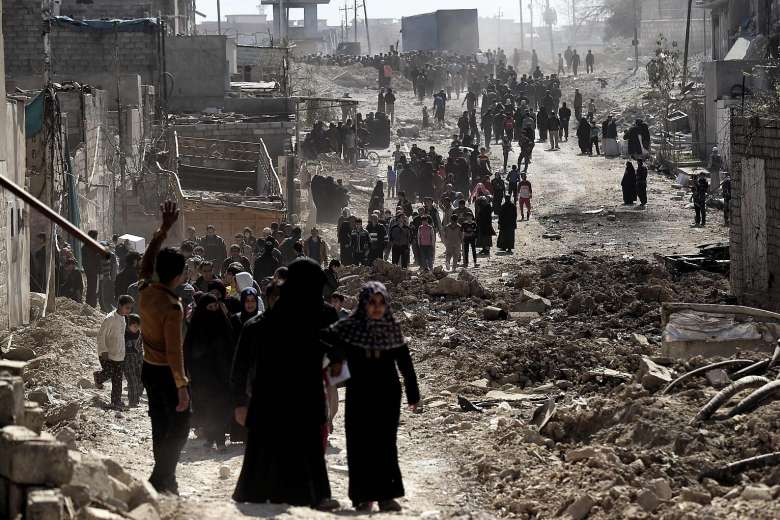 Isis loses last stronghold as the group wallow in disarray

On Saturday the Syrian Democratic Forces (SDF) reported the Islamic State of Iraq and the Levant (ISIS) lost its final stronghold in Syria. If accurate this would bring an end to the self-proclaimed caliphate declared in 2014.

The SDF as a coalition of Arab and Kurdish soldiers backed British, French, and United States special forces were able to defeat ISIS at the city of Baghouz in eastern Syria. In February of this year, CNN reported on the beginning of the assault on the city.

Before the assault began, civilians fled the town. A 14-year-old boy, who was severely wounded by a mortar round, was carried for miles by his family.

Earlier this week, SDF officials said they believed there are 1,500 civilians in the town and 500 ISIS fighters. Some of these are the most battle-hardened, ruthless and experienced fighters remaining in ISIS.

With hundreds of civilians fleeing this week before the SDF assault, it is unclear how many people remained in the town Saturday.

“Syrian Democratic Forces declare total elimination of so-called caliphate and %100 territorial defeat of ISIS. On this unique day, we commemorate thousands of martyrs whose efforts made the victory possible. #SDFDefeatedISIS,” tweeted Mustafa Bail the head of SDF Press Office in northern Syria. According to CNN a paper statement released by SDF the group stated they lost 11,000 “forces, leaders, and fighters” battling the terrorist organization which has been a menace in Iraq and Syria for approximately five years. Despite the positive news, SDF stated they expected to continue to fight ISIS sleeper cells which they expect to “still pose a great danger on our region and the whole world.”

The SDF stated the ISIS militants who mounted the final stand in Baghouz included some of the most battle-hardened remaining in ISIS, who used women and children as shields. Officials told CNN snipers slowed the offensive with snipers, explosive devices, and heat-seeking missiles. ISIS fighters also dug a network of tunnels to move from houses undetected within the city.

Is The ISIS Battle Truly Over?

“Now, the militants are waging a fresh guerrilla campaign from their base in far-flung territories of northern Iraq — launching targeted assassinations, looting villages, planting roadside bombs and training a new “strike force,” ” an Iraqi intelligence official told CNN in March.

Joseph Votel, the top United States General in the Middle East feel disagreed with President Donald Trump’s decision to withdraw troops from Syria, stating the terror group has yet to be defeated. Social Democrats, Democratic Socialists, and Socialists within the United States critiqued Votel’s assessment — being in rare agreement with President Trump (Social Democrats and Democratic Socialists) with a foreign policy decision.

According to a Pentagon report released in mid-February. “ISIS is regenerating key functions and capabilities more quickly in Iraq than in Syria, but absent sustained [counterterrorism] pressure, ISIS could likely resurge in Syria within six to twelve months and regain limited territory.”

The ongoing debate among anti-war activists and neo-conservatives concerning the Middle East is a conversation where war fatigue is matched against the influence of the military industrial complex. While the possibly of an ISIS resurgence exists, activists argue that the United States neo-conservative foreign policy approach of ‘foreign policy through bombing’ has led to the numerous issues citizens in the region are facing.

While warhawks contend that if ISIS is allowed to reemerge the United States and allies will again have to commit further troops to the Middle East. However, this fear of perpetual warfare is one that the United States is currently in. Since the 9/11 terrorist attacks, the United States has had a military presence in Afghanistan, Iraq, and Syria.