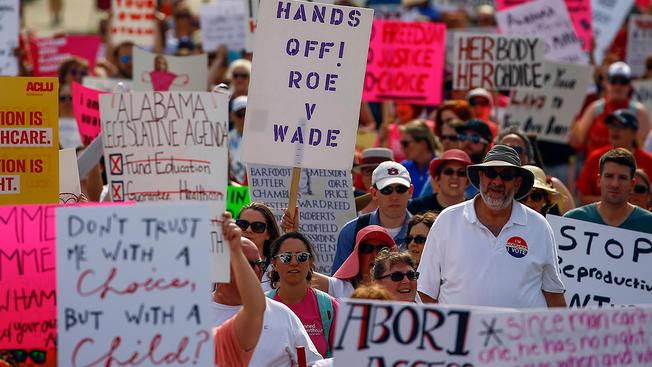 Alabama Governor Kay Ivey signed a ban on almost all abortions, including in cases of rape an incest.

House Bill 314 — also called the “Human Life Protection Act” — criminalizes performing the procedure and makes it punishable by imprisonment of up to nearly 100 years.

This is the most restrictive anti-abortion bill to pass in the U.S. since Roe v. Wade in 1973, which recognized a woman’s choice for an abortion as a right to privacy which is guaranteed by the Fourteenth Amendment of the Constitution.

Missouri also passed a strict anti-abortion measure this week — House Bill 126, also called “Missouri States for the Unborn” — banning abortions after eight weeks of pregnancy, like Alabama, even in cases of rape and incest.

Some argue that banning abortions after six does not allow some women enough time to know that they are pregnant, much less thoughtfully deliberate whether abortion might be the best decision.

Lawmakers and abortion rights advocates have spoken out against the bills, and the American Civil Liberties Union has promised a court challenge that will likely end up in the U.S. Supreme Court.

Though many states are passing the bills, they all have yet to implement the measures.

A top adviser to President Trump admitted this week that the president’s escalation towards a trade war with China could be of detriment to the U.S. economy.

The president claimed via tweet that China “love(s) ripping off America” and warned against any potential retaliation from the country.

When confronted by Fox News host Chris Wallace about how American companies, businesses, and often consumers will ultimately suffer because of the tariffs, Larry Kudlow, Director of the National Economic Council, admitted that “both sides will pay.”

Seemingly in response, Trump tweeted on Monday, “There is no reason for the U.S. consumer to pay the Tariffs, which take effect on China today.” He added they could be “completely avoided if you buy from a non-Tariffed country, or you buy the product inside the USA (the best idea).”

The president announced on Monday that he will be meeting with Chinese leader Xi Jinping in Japan next month.

“China will never succumb to foreign pressure,” Geng Shuang , spokesman for the Chinese Foreign Ministry, said on Monday. He added, “we still hope that the U.S. will meet us half way.”

CNN reported on Sunday afternoon that the White House intends to initiate a peace proposal with a plan to invest in the Middle East.

A workshop is planned for Manama, Bahrain next month and will encourage a focus on spending in Palestinian territories like Gaza and West Bank.

A senior administration official told CNN that the first part of the plan is “to make the area as investible as possible” and an accompanying political component will be announced later in the year.

He said, “We recognize that this needs to go hand in hand with the political plan, but this will be the first chance to roll out details of the economic plan.”

In spite of a promised political counterpart, a spokesman for Palestinian Authority President Mahmoud Abbas told CNN that the plan was not adequate.

He said, “Palestinians will not accept any proposals which do not include a Palestinian state with East Jerusalem as its capital.”