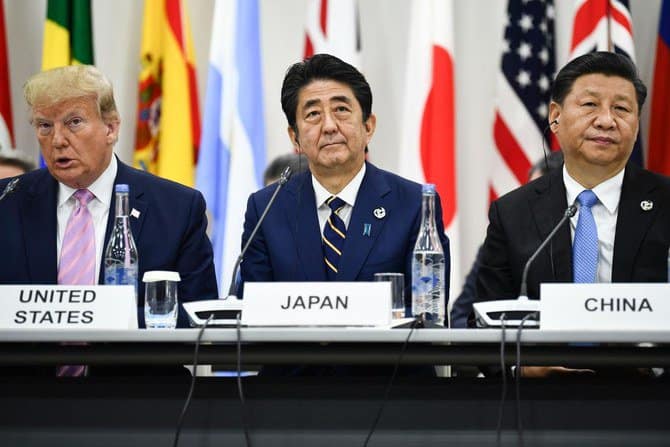 Pres. Donald Trump used the G20 summit to defend removing the U.S. from the Paris Climate Agreement and to claim ‘we have the cleanest air we’ve ever had’ while denouncing alternative energy methods.

“When the wind goes off, the plant isn’t working. It doesn’t always work with solar because solar’s just not strong enough,” Trump said.

Trump also claimed at the summit that he had confronted Saudi Crown Prince Mohammed Bin Salman with questions about the death of journalist Jamal Khashoggi last year.

“I did mention it to him very strongly,” Trump was quoted, adding that it was a ‘bad event.’ He would not provide any further information when asked.

Meanwhile, President of Turkey Recep Tayyip Erdogan who was also at the G20 called on the Saudi Crown Prince to provide desired details about the murder.

“It is first of all MBS who needs to shed light on this because he promised me during our phone call, but until now nothing had been done,” Erdogan said of the prince.

Trump also made light of intelligence which showed that Russian President Vladimir Putin may have been part of an effort to meddle in the 2016 election.

When asked by reporters if he would tell Putin not to meddle in the 2020 U.S. election, Trump turned to Putin with his finger pointed and said, “Don’t meddle in the election, president.”

Both men then shared a smile.

Putin called for an improved relationship between the U.S. and Russia, stating, “I think we have a mutual understanding that we have to get out of the situation that was created until today.”

U.S. and China to Restart Negotiations on Trade

After coming to an agreement with Pres. Xi Jinping of China following the G20 summit, Pres. Donald Trump has announced that the U.S. will not follow through with a previous threat for new tariffs on approximately $300 billion in Chinese imports, if only for now.

“We’re holding on tariffs, and they’re going to buy farm product,” Trump was quoted telling reporters. He stated that the U.S. and China have agreed to ‘continue the negotiation’ on an agreement on trade.

Xi also spoke to reporters, saying, “cooperation and dialogue are better than friction and confrontation.”’

Trump Tweets to Kim Jong Un: Let’s Meet if You Read This

Pres. Trump took to Twitter in hopes of getting a message to Chairman Kim Jong Un of North Korea.

Trump announced that he would be leaving China for South Korea after ‘some very important meetings’ and then suggested that if Chairman Kim were to see his tweet, he meet him at the border of North and South Korea for a handshake.

“I would meet him at the Border/DMZ just to shake his hand and say Hello(?)!” Trump tweeted. He then told reporters he chose to use Twitter because it was a last minute decision.

A federal judge in California prevented $2.5 billion in federal funds from being used for border wall construction on Friday.

The judge favored a challenge to Trump’s choice to move billions from Defense Department funding to pay for border wall construction in California and New Mexico.

The same judge later blocked the administration from “taking any action to construct a border barrier” on areas named in a different lawsuit, which was brought against the Trump administration by the American Civil Liberties Union.

The judge ruled that Congress had already addressed the crisis cited by Trump when declaring a national emergency earlier in the year.