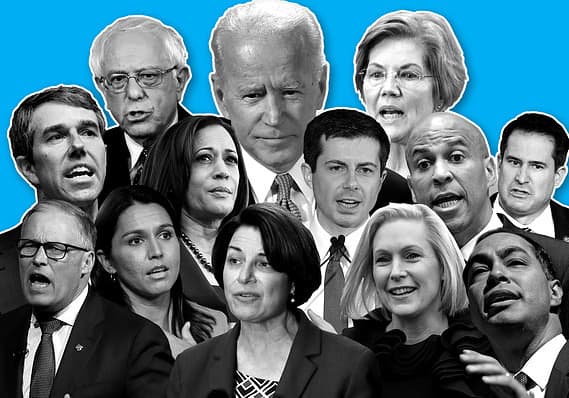 Some of the 2020 Democratic candidates Image/credit/GettyImage

There are currently 24 Democratic candidates running for the nomination in 2020. With so many on the platform, voters feel overwhelmed by the choices. Who better to ask than the people who elected them into office, before?

Senators, congressional representatives, and former governors all have approval ratings from their districts. Some candidates running, like Mayor Pete Buttigieg and Mayor Wayne Messam, have a small pool of constituents to draw from. Others, like candidates Marianne Williamson and Beto O’Rourke, ran campaigns but were never elected.

Mayors And Their Towns

Mayor Bill de Blasio of New York City has an approval rating of 42 percent as of 2019. A Quinnipiac poll from April expressed the opinion of NYC constituents that de Blasio “should not be running for president,” at 76 percent agreeing. Overall, the national polls agree. The Mayor has a 0 percent in the Quinnipiac polls for Democratic candidates. From accidentally dropping a groundhog (which caused it to die) to whispers of corruption and favors given to big donors, de Blasio hasn’t done well for the people of New York City. The other two mayors were elected by a majority to their positions by a smaller pool of voters.

Some of the senators in the race have made headlines before, like Cory Booker and Kamala Harris. But voters don’t know senators like Michael Bennet very well.

Senator Michael Bennet isn’t exactly well-liked in his home state. Only 39 percent of people from Colorado like what he’s done as a Senator. The rest of them don’t even really know him, according to the Morning Consult. In a populist world, he is more of a moderate, which already turns voters off. Bennet is against socialism, in a party that is more and more turning to socialist values.

California Senator Kamala Harris, while one of the few scoring any relevant numbers in the national polls, has a low rating of 43 percent among her constituents. California remembers Harris as a prosecutor, not necessarily someone with their best interests at heart. Harris also hasn’t served in the Senate for a long enough period of time.

Senator Cory Booker is barely blipping on the national polls, but constituents like what he has done, with a 47% favorability. Activists in New Jersey find fault, however, with Booker’s use of progressive terminology contrasted with his reliance on “crony capitalists.”

In comparison, Democratic Socialist Senator Bernie Sanders has a far higher approval rating. The Vermont senator has a very high 64 percent. In fact, in 2017, Sanders was the most popular politician in the United States. Sanders has also served in the Senate for more than two decades and has run for president before.

Kirsten Gillibrand, the New York senator, is also at 47% popularity among her constituents. She won her seat easily, with 67 percent of the vote in her district. Gillibrand at one point had an A rating from the NRA, proving her ability to be bipartisan in a partisan world. She passed a 9/11 health bill and helped with legislation on ending Don’t Ask Don’t Tell. But while she may work for her region, she’s failing in the race.

Klobuchar has a very high senator approval rating, at 58 percent, but only just made it to the last debate by a marginal number. While Minnesota might love her, not many other regions have heard of her or her policies.

Voters rated Senator Elizabeth Warren at 51 percent approval, which translates over to her higher polling numbers. Warren also has served in the Senate for three decades. Like Sanders, a longer period spent in office bodes well for national interest.

The governors are also very popular. John Hickenlooper of Colorado had a 50 percent approval rating in 2018. Jay Inslee of Washington had an approval rating of 46 percent, while Steve Bullock peaked at 60 percent. But no one knows who these men are outside of their respective states.

Former Vice President Joe Biden had a very high approval rating at the time he was sworn into office, along with President Obama. However, it had dropped by 10 percent when he left office in 2016. Gaffes like telling an African American audience that they “would be in chains” should Romney win did not translate well for the Vice President’s image. Biden started at 53 percent and finished at 43 percent.

The top four in the Democratic polls (as of August 9) are Biden at 33 percent, Sanders at 20 percent, Warren at 19 percent, and Harris at 9 percent. Even with the other candidates who have previously been in some form of public office scoring so high with their own constituents, doesn’t seem to matter. Other people have never heard of these candidates before. While voters love Tulsi Gabbard in Hawaii, she only served as a Congresswoman for a few years.

The Democratic primaries really boil down to a popularity contest.