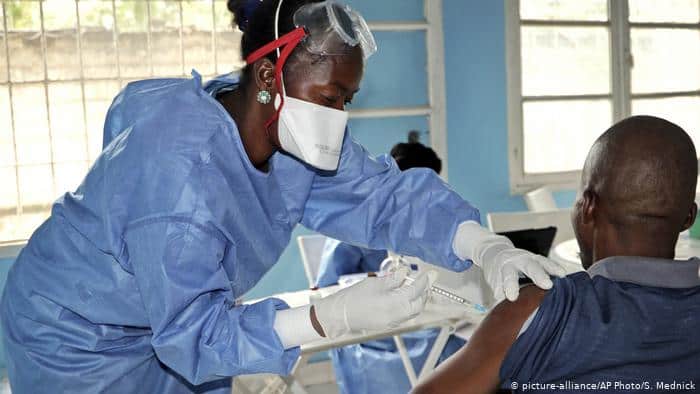 The Democratic Republic of Congo(DRC) risks plummeting image in the international community as fears over its lingering Ebola crisis thicken among surrounding countries.

DRC’s battle with Ebola is showing no sign of thawing after another Ebola victim, was confirmed dea recently. The recent death makes it the third to be confirmed in Goma, one of the popular cities in the country.

“There’s a third confirmed case. It’s the daughter of the patient who died yesterday. The little girl is in hospital, but the virus could be fatal as mortality rates are high in children,” North Kivu province’s Ebola Coordinator had disclosed to DPA news agency.

The country’s lingering Ebola epidemic has left huge damage in its wake. Not less than 1,800 people have been reportedly killed by the epidemic since last year August.

The country’s outbreak is ranked as the second-deadliest Ebola outbreak in history, prompting the World Health Organization (WHO) to declare it a global emergency recently.

Fight against Ebola in the country has been greeted with slow progress than expected despite boasting of huge local and international support. CARACAL REPORTS had earlier reported how violence and distrust have been stifling efforts to contain the spread of the epidemic in the country.

The report had partly argued: “While this is not the first time the country would witness Ebola outbreak. Statistics show the recent outbreak, which started in August last year, is the tenth in DR Congo. However, the recent outbreak has appeared more sophisticated and complex affecting a larger population.

“As it stands, DRC’s chances of winning the battle against Ebola are slim, given the widespread distrust and attacks on health workers in the tumultuous eastern part of the country.”

In the year 2019 alone, about seven persons have been reportedly killed while were 58 injured in 198 attacks. These statistics are indications that the country faces an uphill task in its push to rid Ebola.

In the coming days, the success of the campaign against Ebola in the country will be determinative of people’s trust in the vaccines provided to tackle the epidemic. Factors such as ingrained belief systems, cultural worldviews among others have withered hope in the efforts of the health workers among locals.

With the situation seemingly defying workable solutions, fears are mounting across neighboring countries with the DRC. On Thursday, Rwanda reportedly closed its border with DRC after the confirmation of third Ebola death in Goma, which houses about two million people.

The move, which only lasted temporarily before it was opened again, drew criticisms across various quarters with many lampooning the Rwandan government for taking such measure. DRC’s government had also condemned the move.

The World Health Organization (WHO) had in July announced Ebola outbreak in the country as an international health emergency. The agency however, warned against countries shutting their borders with DRC as a result of the epidemic.

The WHO had declared in July: “No country should close its borders or place any restrictions on travel and trade. Such measures are usually implemented out of fear and have no basis in science.”

The country risks a deflated image in the international community in the coming days, a development which is likely to scare away investors and others visiting the country. Such situation would only compound the economic woes of many Congolese nationals.

A glimpse of the impending horrible situation perhaps came to bare shortly after Rwanda reportedly shot its border with DRC. Prices of commodities skyrocketed immediately at both ends, with many traders cashing on the situation.

Whether or not neighboring countries with DRC would stick by the WHO’S directive to keep their borders open and desist from placing travel and trade restrictions remain a puzzle. However, the recent action of Rwanda suggests such measure is more likely than not.

Controversies over Killing of WHO Doctor

DRC’s fight against could be greatly threatened by ongoing controversies surrounding the killing of WHO’s doctor, Richard Mouzoko, who was killed in April during an attack on a hospital in Butembo, a suburb in North Kivu province.

The death of Mouzoko, a Cameroonian doctor, sent to DRC’s most troubled part battling the epidemic has led to the arrest of three local doctors alleged to have masterminded the WHO doctor’s killing.

The arrest, announced by military prosecutors had further compounded the fight against Ebola in the DRC with many local doctors threatening to embark on strike, should the military refuse to release their arrested members.

It is unlikely the military would bow to pressure and release the arrested doctors until investigations are completed, a development many feared could worsen the present situation in the country, considering threats of strike by local doctors’ association.

Should the local doctors eventually embarked on the proposed strike, the country would be greatly affected as such would shrink the numerical strength of health workers attending to Ebola cases.