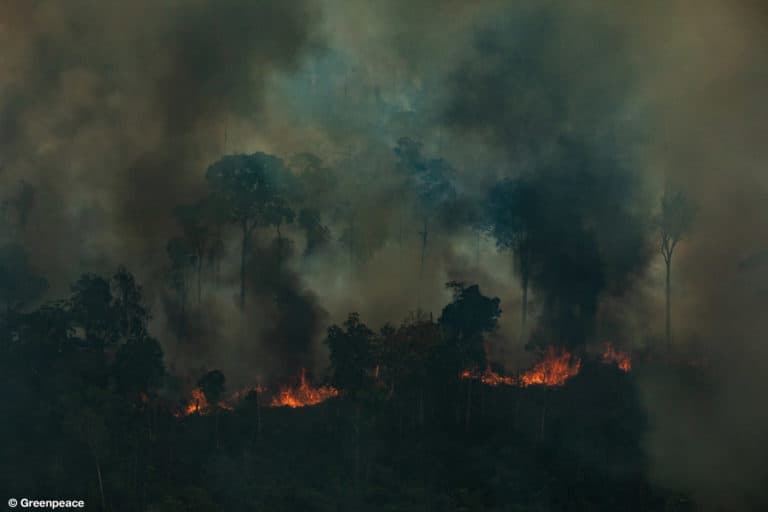 Parts of the Amazon rainforest in Brazil is on fire and burning at a startling rate.

An estimated 44,000 troops will be made available to fight the fires in six Brazilian states — Roraima, Rondonia, Tocantins, Para, Acre and Mato Grosso. The military will reportedly use aircraft to dump thousands of gallons of water on the blazes.

While wildfires are normal for this time of year, which is the region’s dry season, they are more detrimental and far-reaching this year. On Saturday, the country prepared to deploy troops and military aircraft to the Amazon rainforest.

Many critics have denounced President Jair Bolsonaro’s approach to the crisis. While the fires have been burning for weeks, the president did not announce military assistance in fighting the flames until Friday.

Conservationist Paul Rosolie was quoted as saying, “The Amazon is a loop. It’s producing the moisture that creates all that rain that makes it a rainforest.” Rosolie then said it is on the verge of “reaching a tipping point, where that moisture system might be too dry to produce the rain,” which could lead to the collapse of the entire Amazon.

French President Emmanuel Macron recommended the leaders at the G-7 Summit discuss the crisis in the Amazon this weekend and threatened to block a trade deal between the European Union and Brazil over the ongoing fires. He said leaders should speak about the need to “preserve this forest … because it is a treasure of our biodiversity and our climate thanks to the oxygen that it emits and thanks to the carbon it absorbs.”

The U.S. aircraft known as SuperTanker is also flying over the area to help put out fires. President Trump offered further assistance via Twitter but Brazilian officials report there has been no further communication on the matter.

Before leaving for the G-7 Summit in France, Pres. Trump increased tariffs on Chinese imports and made a threat to force all American companies to leave their business ties with China, later citing the International Emergency Economic Powers Act of 1977 as giving him permission to do so.

Trump’s questionable decision could upset the global economy, which some experts predict is already on the verge of a recession.

Trump tweeted on Saturday, “For all of the Fake News Reporters that don’t have a clue as to what the law is relative to Presidential powers, China, etc., try looking at the Emergency Economic Powers Act of 1977. Case closed!”

According to Elizabeth Goitein, an expert on presidential power at the Brennan Center, “The International Emergency Economic Powers Act, which we call IEEPA, is an incredibly powerful authority that allows the president to declare a national emergency with respect to any unusual and extraordinary threat to the national security foreign policy or economy of the United States that has its source, in substantial part, from overseas.”

Goitein told NPR that this gives the president authority to take a “staggering range of economic actions and impose severe economic penalties on people or entities or countries that are designated as being associated in some way with that threat.”

On Sunday, Trump told G-7 leaders, “I could declare a national emergency, I think when they steal and take out and intellectual property theft anywhere from $300 billion to $500 billion a year and when we have a total lost of almost a trillion dollars a year for many years.”

Though Trump is the first president to use the law to impose tariffs on foreign goods and his actions are questionable, he will almost certainly veto any attempts by Congress to terminate the emergency.

David Koch, who built Koch Industries and the formidable Koch political network along with his brother Charles, has passed away at the age of 79. Koch reportedly had prostate cancer.

The Koch brothers have been heavily influential in American politics and are notorious for secretly funding negative advertising against Democrats. In 2010, the brothers influence reportedly helped Republicans gain 63 House seats.

While some prominent personalities — such as HBO host Bill Maher — rejoiced in Koch’s death, Democratic primary candidate Sen. Bernie Sanders rebuked members of the audience at a recent rally for cheering the news.

“I don’t applaud … the death of somebody. We needn’t do that,” Sanders told the crowd. Sanders then added, “I think what we can say is that the Koch brothers and other billionaires, because of this disastrous Citizens United Supreme Court decision, have been able to spend hundreds and hundreds of millions of dollars to represent the wealthy and the powerful, and the fossil fuel industry, which is where the Koch brothers made a lot of their money.”

Others have applauded Koch’s philanthropy. He reportedly donated billions to the research of prostate cancer following his own diagnosis.

Infant in Critical Condition After Crossing U.S. Border with Father

A 6-month-old infant is hospitalized in critical condition after being detained with her father and a group of approximately 20 other migrants in Texas.

No specifics about the child’s illness have been released at this time.