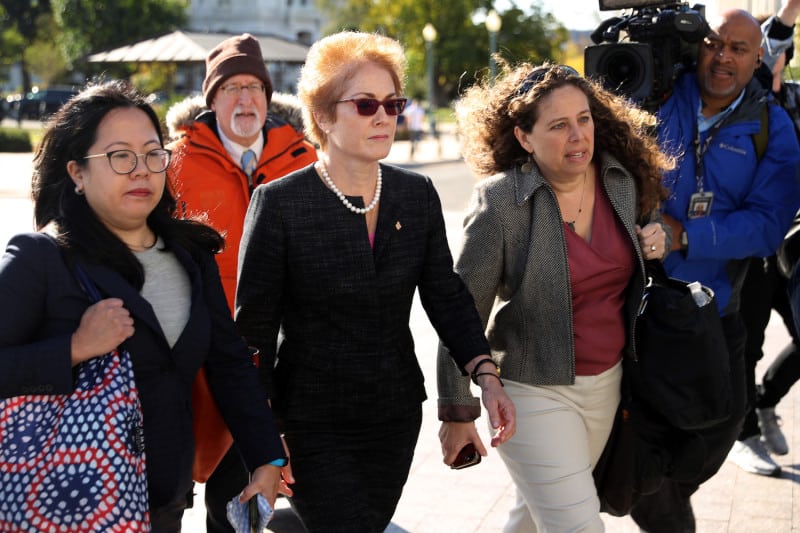 On Tuesday, acting U.S. Ambassador to Ukraine, William Taylor, testified that Trump’s personal attorney Rudy Giuliani was attempting to create a covert channel where U.S. aid to Ukraine would be dependent on the country helping Trump in his 2020 reelection campaign.

U.S. security aid to Ukraine provides training, weapons, and support to the country’s soldiers. “More Ukrainians would undoubtedly die without the U.S. assistance,” Taylor wrote on a trip to a combat zone in Ukraine.

Taylor testified that Trump insisted Ukrainian President Volodymyr Zelensky publicly “say he is opening investigations of Biden and 2016 election interference” and Ukranian officials were told ‘everything’ was dependent on the announcement.

The New York Times and The Associated Press reported on Wednesday that government sources in the Ukrainian capital of Kiev claimed Zelensky’s camp was primed for an ultimatum from Trump. Zelensky to honor Trump’s demands or face a prolonged freeze in aid.

While Zelensky has publicly denied feeling any pressure from Trump, multiple accounts suggest Trump was attempting to establish a quid pro quo: an investigation into the Biden family for needed military assistance.

Philip Reeker, a U.S. diplomat in charge of European affairs, appeared under subpoena on Saturday to sit for more than eight hours of questioning related to the impeachment inquiry against Pres. Trump. According to a witness with knowledge of the questioning, Reeker told House members that a State Department official overruled his attempt to write a letter to defend former Ukrainian Ambassador Marie Yovanovitch.

Allegedly, Yovanovitch was getting in the way of establishing Giuliani’s channel for establishing foreign policy with Ukraine. She was removed from her position soon after becoming a political target for Trump allies.

The Education Department and Education Secretary Betsy DeVos have been held in contempt of court and fined $100,000 for violating a 2017 order to stop collecting loans owed by defrauded students of Corinthian Colleges.

The Education Department admitted that they ‘mistakenly’ emailed and billed 16,000 borrowers after the order was established. Some paid willingly upon receiving a bill, others had wages garnished or tax refunds taken. Those borrowers have all been reimbursed, according to the department.

The judge in the case felt that the department did not do enough to ensure they stopped collecting payments.

The murder of civilians helped to spread the unrest and Iraqi Prime Minister Adel Abdul Mahdi has promised to reshuffle his cabinet and offer a reform package to address protesters’ demands.

After a peaceful rally was attended by more than a million people in Chile on Friday, the country’s president Sebastian Piñera announced, “I have put all my ministers on notice in order to restructure my cabinet to confront these new demands.

The protests against income inequality began about a week ago and were sparked by an increase in metro fares. Seventeen people have been killed in clashes between protesters and riot police and over 7,000 people have been arrested.

Piñera declared a desire to end the protests through a bundle of reforms, including removing an imposed curfew, suspending the increase in metro fares, and implementing basic pension and minimum wage. “We have all changed,” he said. “Today’s joyful and peaceful march, in which Chileans have asked for a more just and unified Chile, opens hopeful paths into the future.”

California Wildfire Has Burned Tens of Thousands of Acres of Land

The Kincade Fire started on Wednesday in California and has torched more than 25,000 acres of land in California, so far. Thousands of firefighters continue to battle the blaze, which is on steep terrain and difficult to access.

Approximately half a million residents in two towns north of San Francisco, have been ordered to evacuate. A state of emergency has been declared in Los Angeles and Sonoma counties.

Due to concerns that strong winds could spark new fires, Pacific Gas & Electric announced that power in 36 counties will be shut off for 48 hours or longer. This will leave about two million people without power.