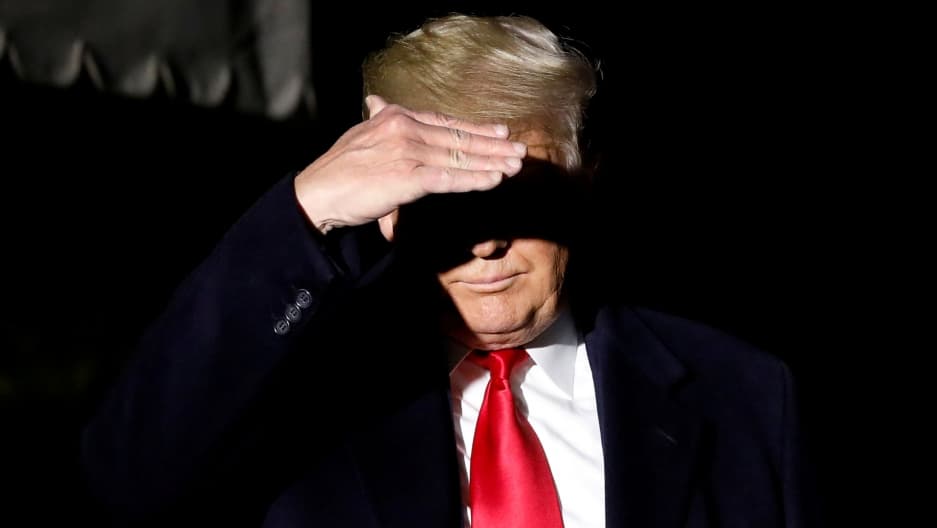 Transcripts from closed-door impeachment hearings that occurred last month were released to the public this week and revealed testimony from the top US diplomat to Ukraine. Bill Taylor testified that military aid to Ukraine was suspended pending an agreement to investigate the Biden family, along with a public announcement from the Ukrainian president.

He explained that he had “clear understanding” that Trump would not sign a nearly $400 million dollar check for aid to Ukraine until an announcement was made opening an investigation into former V.P. and current Democratic presidential primary contender Joe Biden.

Taylor did not directly implicate the president in his testimony but specified that Trump’s personal lawyer, Rudy Giuliani, was responsible for attempting to get Ukraine to make an announcement about an investigation.

On Monday, Gordon Sondland, US envoy to the European Union, provided a letter through his attorney to alter his own testimony after the transcripts were released. He testified that the US military aid to Ukraine was arranged without any conditions. However, Taylor testified that Sondland told him Trump wanted the Ukrainian president to make an announcement before the aid was released.

In Sondland’s letter of revised testimony, he claimed that he knew and relayed to Ukrainian officials that the aid was “likely” dependent on a commitment to an investigation and a subsequent announcement from the president of Ukraine.

On Friday, Trump said of Sondland, “I hardly know the gentleman,” though he appointed him as ambassador to the EU. In October, Trump noted that Sondland was “highly respected” and “a really good man and great American.”

Transcripts from Lt. Col. Alexander Vindman’s testimony, a top specialist on Ukraine on the National Security Council, has also been released by House investigators. Vindman testified that he was in the room with Pres. Trump during his phone call with the Ukrainian president, that he almost immediately alerted legal staff on the National Security Council, and that he was advised that a top attorney for the NSC had moved the records for the call to a highly classified system.

“I was concerned by the call,” Vindman said. “I did not think it was proper to demand that a foreign government investigate a U.S. citizen.”

In the transcripts, Vindman also claimed to have been present with Sondland, former National Security Adviser John Bolton, and Ukrainian officials when Sondland brought up the need for Ukrainian officials to secure the investigation before the presidents could discuss the aid. Vindman testified that Bolton ended the meeting abruptly and Sondland was warned that his remarks were inappropriate. Bolton was eventually fired by Trump.

This week, public hearings in the impeachment inquiry will begin. Taylor will testify again, as well as George P. Kent, who is a top State Department official, and Marie L. Yovanovitch, the former US ambassador to Ukraine. Republicans have also requested testimony from Hunter Biden and the still-unnamed whistleblower, as well as other witnesses they would like to question.

US Elections: Democrats Win Big in Kentucky and Virginia.

In Kentucky, Pres. Trump held a rally Monday night and made a plea to his supporters in the crowd and watching at home. “If you lose, they will say Trump suffered the greatest defeat in the history of the world,”  he told them. “You can’t let that happen to me.”

On Tuesday, Democrat Andy Beshear defeated the incumbent Republican governor, Matt Bevin, who refused to concede defeat. Though Trump’s praise of Bevin may have helped secure some extra votes, it was not enough to win the election, even in a state where Trump is popular.

In Virginia, the Democratic party now controls the full government for the first time since 1994.

The results of these elections, paired with the outcomes of the 2018 midterm elections, have been interpreted as generally favorable for the eventual Democratic nominee in the 2020 presidential race.

Thousands of people have been forced to evacuate their homes in Australia due to unprecedented brushfires that have killed at least three people and left many missing. Officials have warned that the death toll is likely to rise as firefighters continue attempts to control approximately one hundred separate blazes.

A long-running drought going into the country’s summer months created conditions where the fires could burn with little hope for control. Helicopters have been dropping water on the fires and more than a thousand firefighters are fighting the blazes. Fire officials speculate that falling temperatures and an increase in humidity will help crews in combating the flames.