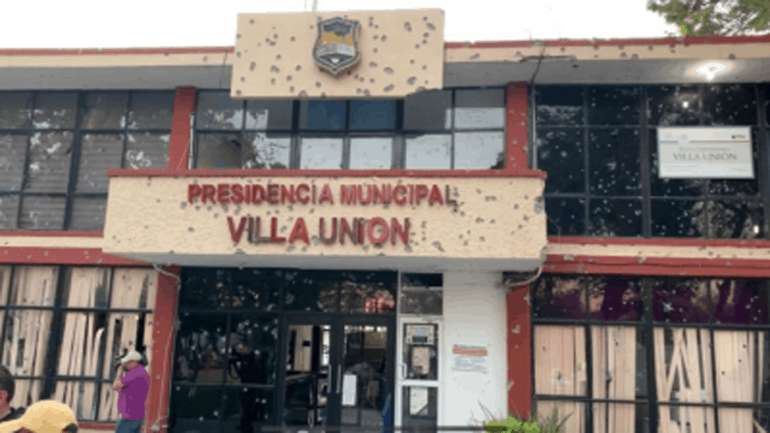 The aftermath of an hour-long gun battle in Villa Union on Nov. 30, 2019 via Coahuila state Gov.

Over the weekend, armed cartel members stormed Villa Union, a small town near the Coahulia state near the Texas border. The gunman began their assault on Saturday, attacking various government offices, including the Mayor’s official office.

According to reports, security forces responded quickly after killing 10 gunmen in an exchange of bullets. Reuters reports on how the scene developed over the weekend.

The government of the northern state of Coahuila said local security forces killed 14 gunmen on Saturday and Sunday, after a major gunfight broke out in the small town of Villa Union near the Texas border. Earlier, the state government had said police had shot dead 17 cartel members.

Four police were also killed in the shootouts, which broke out around midday on Saturday, sparking fresh criticism of the government’s approach to handling the powerful gangs.

Four security officers were killed during the exchange of gunfire, as were two unarmed civilians who are believed to be murdered by the cartel during their initial attacks. The cartel rode into town in heavily armed pickups, before opening fire on various offices. The initial firefight between the cartel and Coahuila officers lasted approximately 90 minutes on Saturday. Over 60 gunmen from the Cartel of the Northeast from Tamaulipas state opened fire on security forces.

On Sunday, the Associated Press (AP) detailed the latest details regarding the incident. Gov. Miguel Angel Riquelme stated that officers are using helicopters to tail the remaining cartel forces who remain at large. Francisco Contreras, an official within the state security agency told reporters that the two murdered civilians were an engineer and firefighter who worked for the state. Unfortunately, he informed those gathered that a second firefighter remained missing.

Several citizens from the 3,000 person town were kidnapped by the cartel as they escaped from the tiny town.

AP reports, “Federal officials (Mexico) said recently that there have been 29,414 homicides so far in 2019, compared to 28,869 in the same period of 2018,” proving how big of an issue cartel led violence remains in Mexico.

The Council on Foreign Relations details the increasingly problematic homicide problem within the country.

Mexican law enforcement and the military have struggled to curb crime-related violence. In 2018, the number of drug-related homicides in Mexico rose to 33,341, a 15 percent increase from the previous year—and a record high. Moreover, Mexican cartels killed at least 130 candidates and politicians in the lead-up to Mexico’s 2018 presidential elections.

The organization also details how cartels became organized in the 1980s after drug traffickers assigned areas of control to each group. However, this led to violent territorial conflict which often leads to civilians getting caught up within gang-related violence.

Many of the weapons used in Mexico’s gang-related homicides originate from the United States. The US is also in the midst of a decades-long gun epidemic. Unfortunately, gun violence in both countries is far from residing, and political hurdles remain over the situations stagnating progress in either situation.