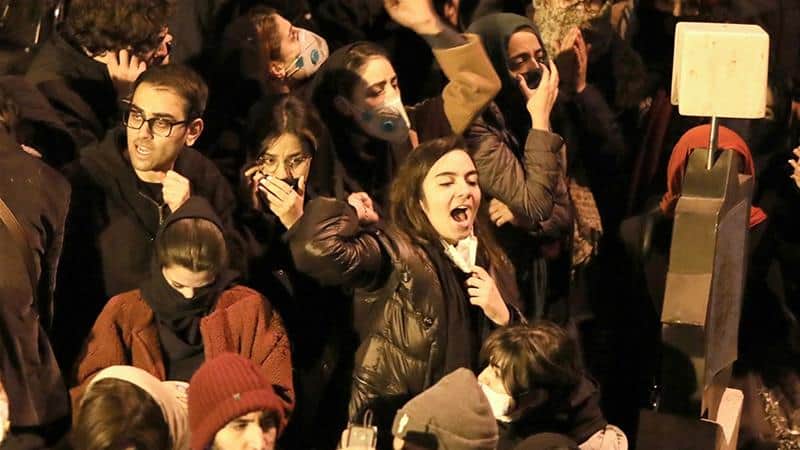 Iran has admitted to the shooting down of Ukrainian airliner which crashed near the Iranian capital on Wednesday after initial denial. All 176 people on board were killed, most of them Iranians.

The Iranian regime blames the mistake on “human error at the time of crisis caused by US adventurism.” Iranian Foreign Minister Javad Zarif offered “apologies and condolences” to the Iranian people, victims’ families, and “other affected nations” via Twitter.

Anti-government protests began on Saturday in Iran, with demonstrators condemning the crash and calling for the removal of Supreme Leader Ayatollah Ali Khamenei.

In an interview on Fox News on Friday, Pres. Trump bragged that the US has a “very good relationship with Saudi Arabia” and so we have started selling them, American troops.

Trump was quoted, “I said, listen, you’re a very rich country, you want more troops? I’m going to send them to you, but you’ve got to pay us. They’re paying us. They’ve already deposited $1 billion in the bank.”

He continued by saying we have also sold troops to South Korea. He said, “South Korea gave us $500 million… I said, ‘You gotta help us along. We have 32,000 soldiers in South Korea protecting you from North Korea. You’ve gotta pay.’”

Trump did not make clear where the money was deposited or explain whether soldiers would now be sent to any country that could pay for them. Notably, Trump campaigned for president on a promise to bring American troops home.

Many oppose Trump’s close relationship with the Saudi royal family and government due to suspected involvement in the murder of one of their citizens, journalist Jamal Khashoggi.

Two US Soldiers Killed by Bomb in Afghanistan

According to a statement released by the US military on Saturday, two troops were killed and two more were injured by a roadside bomb which has since been claimed by the Taliban.

The deceased soldiers have been identified as paratroopers from Fort Bragg, Staff Sgt. Ian Paul McLaughlin of Virginia and Pfc. Miguel Angel Villalon of Illinois. McLaughlin was a father of four.

Though the U.S. military has held a presence in Afghanistan for nearly two decades, the Taliban has gained control of nearly half of the country.

A resolution that calls on Pres. Trump to terminate the use of the U.S. Air Force in Iran pending Congressional approval has passed in the House of Representatives and will now move to the Senate for a vote.

The Iran War Powers resolution passed 224-194, with most voting on party lines. It demands Trump to cease deployment of U.S. troops to Iran until he receives a Congressional authorization or a declaration of war is made by Congress.

The US House of Representatives has voted to regulate PFAS chemicals, approving a bill that would require the Environmental Protection Agency to implement a national drinking water standard for the chemicals. The agency already missed the previous deadline to set the standard by the end of 2019.

PFAS compounds are commonly used in non-stick and fire-resistant products but are linked to various harmful health effects in humans, including birth defects and cancer.

Caracal Reports previously interviewed residents of Wilmington, North Carolina who believed that a leak of PFAS chemicals from a Chemours plant into the local water supply may have triggered an unusually high volume of reproductive issues and pediatric cancer.

Trump officials oppose the bill because it would bypass “well-established processes, procedures, and legal requirements.” It is expected that Trump will veto this bill if it is passed in the Senate.

House Speaker Nancy Pelosi announced that articles of impeachment against Pres. Trump will be forwarded to the Senate in the coming week.

Judiciary Committee Chairman Jerry Nadler was asked to prepare to present a resolution to “appoint managers and transmit articles” this week. The House will need to agree by a vote on managers before the articles can progress to the Senate.

Prince Harry Announces Plan to ‘Step Back’ from Royal Family

On Wednesday, Prince Harry and Meghan, Duchess of Sussex, announced a plan to “step back as ‘senior’ members of the Royal Family.”  Queen Elizabeth II has scheduled a family meeting for Monday to discuss the couple’s future.

The couple said in their announcement that they would like to become “financially independent” but they will continue to “fully support Her Majesty The Queen.”