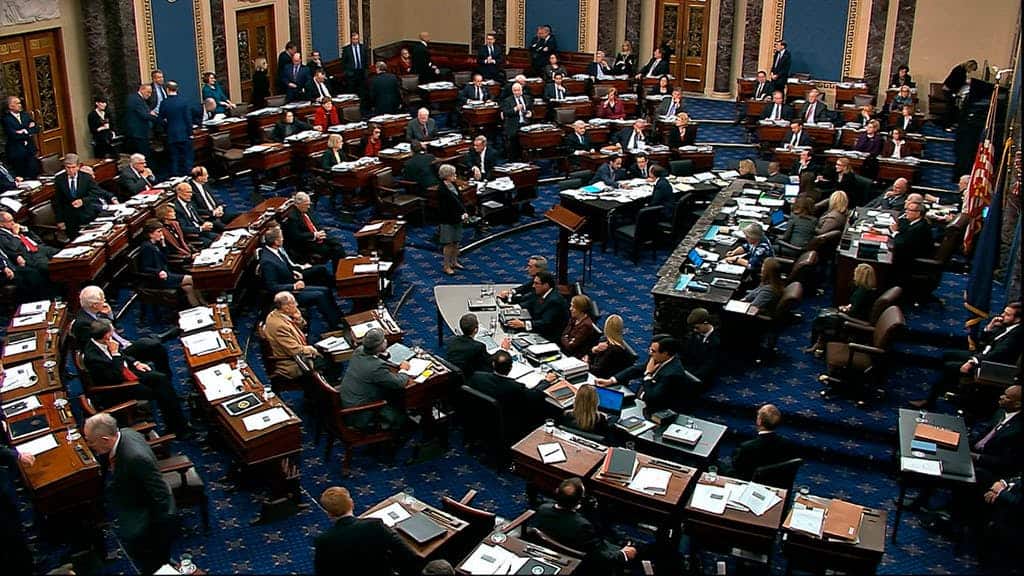 The House Intelligence Committee Chairman, Adam B. Schiff laid out the case against President Trump that he tried to solicit foreign interference in the 2020 election.

Oral arguments for the conviction of President Trump began in the Senate impeachment trial Wednesday afternoon, opening the first of three days of arguments from the seven House Democratic impeachment managers.

The arguments, led by Adam Schiff, come after last-minute changes to the trial rules proposed by Senate Majority leader, Mitch McConnell, were announced Tuesday night. The changes include allowing three days rather than two for the 24-hour oral arguments by the House. The new rules also allow evidence from the House record to be admitted into the Senate trial record by default unless there is an objection.

The changes appear to be in response to pressure from vulnerable Senate moderates inside the party, like Republican Senator from Maine, Susan Collins. A spokesperson for Collins said to NPR that the Senator had “raised concerns about the 24 hours of opening statements in two days and the admission of the House transcript in the record. Her position has been that the trial should follow the Clinton model as much as possible. She thinks these changes are a significant improvement.”

McConnell had previously stated his intent to follow the rules precedent set by the 1999 impeachment trial of President Bill Clinton. The rules were approved Tuesday by a party-line vote of 53-47 after eleven amendments by Minority Leader Chuck Schumer were rejected. Two independents, Senator Bernie Sanders from Vermont and Senator Angus King from Maine, joined the Democrats.

The last-minute changes may signal some softening from McConnell who has previously stated that he will not be an impartial juror, despite the oath the Senators all swear to do impartial justice. Senator Lindsey Graham (R-Sc.) also previously contradicted this oath, stating, “I’m not trying to pretend to be a fair juror here.” These statements from Senate leaders are causing concern among Americans who want an impartial trial for the President.

A January poll by Ipsos and FiveThirtyEight found that 83 percent of Americans believe Senators should attempt to be impartial jurors. Fifty-seven percent said that the Senate should allow new witnesses and testimony.

Despite the small rules concessions, McConnell does not appear to have any interest in conducting a fair trial. He has repeatedly pushed back against calling witnesses or hearing new testimony during the trial, all while claiming to follow precedent. Both the impeachment of President Clinton and of President Andrew Jackson in 1868, the only two Presidential impeachments to ever come to Senate trial, have included the testimony of witnesses.

Although there is no expectation that there is any path to a conviction in the Senate, which requires a two-thirds majority if McConnell refuses to allow witnesses it could set a dangerous precedent for our democracy. Although they won’t be making their oral arguments until next week, the White House defense team has indicated that they do not plan to contest the facts in question, but the legitimacy of impeachment, itself.

In a response to the impeachment summons, the White House claimed that “This is a brazen and unlawful attempt to overturn the results of the 2016 election…” The response also stated, “The Articles of Impeachment are constitutionally invalid on their face. They fail to allege any crime or violation of the law whatsoever”.

Constitutional scholars, however, disagree with the idea that criminal behavior is necessary for impeachment. Over 870 legal scholars signed an open letter to Congress to this effect. By continuing to insist that the impeachment is unconstitutional, the White House is eroding public faith in our system of checks and balances.

Republicans have even disagreed with themselves over this issue. During the impeachment of President Clinton in 1999, Senator Graham agreed with the scholars’ analysis, saying, “You don’t even have to be convicted of a crime in this constitutional republic if this body determines your conduct as a public official is clearly out of bounds in your role. Impeachment is about cleansing the office. Impeachment is about restoring honor and integrity to the office.”

Scholars Warn of a “Regime Cleavage”

The partisan flip-flopping by senior members of the Republican party is increasingly raising questions about the legitimacy of our democratic system when those who are meant to be impartial are clearly operating along party lines.

The same was true two decades ago during the Clinton trial, but the problem seems to have gotten worse as the country has moved to more extreme ends of political polarization since the 1990s. There is now significantly less overlap between the individual ideologies of Democrats and Republicans than there was twenty years ago. Since one-third of the Senate Republicans are up for re-election in 2020, they have an incentive to tow the party line if they want to keep their jobs.

Increased political polarization appears to be driving the willingness of many Senator Republicans to overlook abuses of power that a Democratic president would never get away with.

In his opening arguments today, Representative Schiff argued that by allowing this behavior to go unremedied, Congress would be fundamentally altering the future of American democracy. He stated, “If not remedied by his conviction in the Senate and removal from office, President Trump’s abuse of his office and obstruction of Congress will permanently alter the balance of power among the branches of government, inviting future presidents to operate as if they are also beyond the reach of accountability, congressional oversight, and the law.”

Some scholars are arguing, though, that Trump is not the cause of our democratic decline, but rather a symptom of what political scientists call “regime cleavage”, defined as “a division within the population marked by conflict about the foundations of the governing system itself.” In October, Thomas Pepinksy, a Cornell professor of government, wrote for Politico that, “In societies facing a regime cleavage, a growing number of citizens and officials believe that norms, institutions, and laws may be ignored, subverted or replaced.”

The White House claims that the impeachment proceedings are “illegitimate,” and attempts by the Senate Republican leadership to make it so by refusing to hear witness testimony, are examples of such cleavage.

The coming days of the impeachment trial will serve as a benchmark by which to measure how far gone into this cleavage our democracy is. Nothing short of a clear bipartisan rebuke of this divide is likely to change the course. While that seems unlikely, the small concessions made by McConnell on Tuesday indicate that he might be willing to take the impending Constitutional crisis seriously—if only bipartisanship polled well.