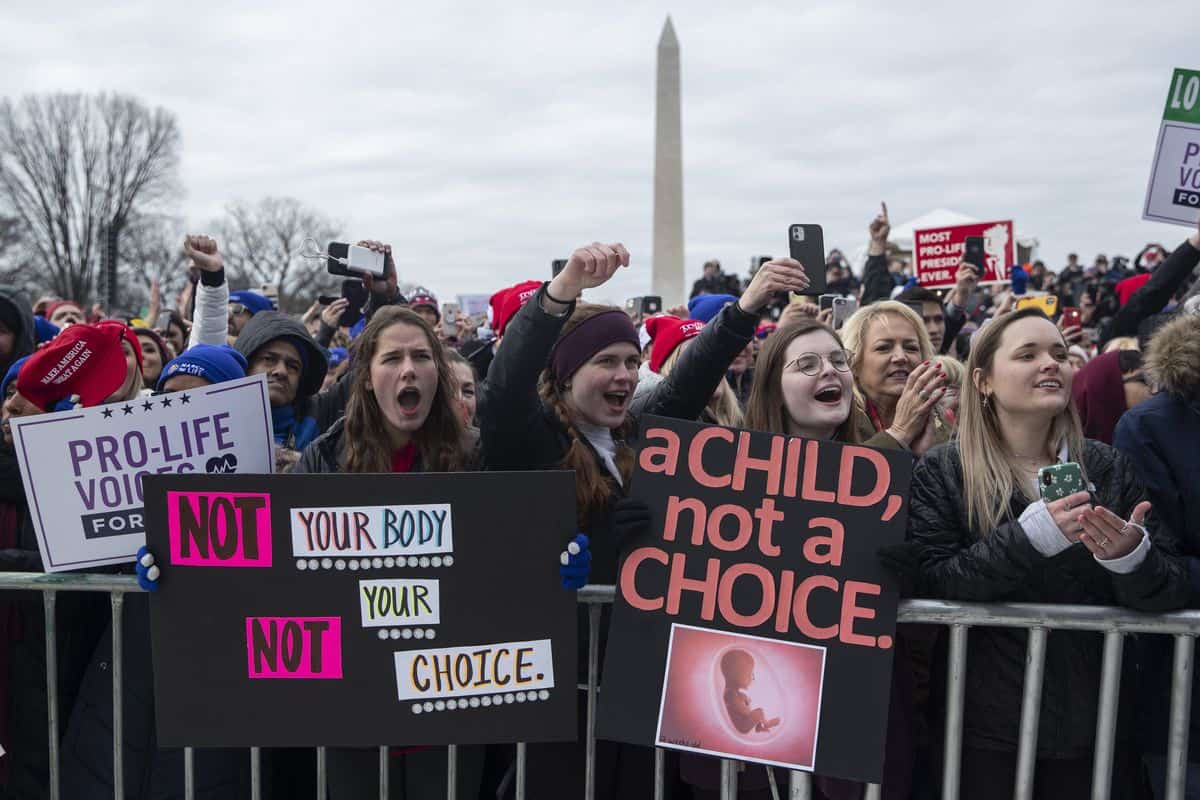 On Friday afternoon, President Trump became the first sitting President to attend the annual March For Life in person. Previously, the highest-ranking White House member to attend the pro-life rally was Vice President Mike Pence, who has attended the march since 2017. Other presidents have delivered messages over the phone.

The March for Life is the nation’s largest pro-life rally and has occurred annually in Washington, D.C. since 1974, on the anniversary of Roe v. Wade. The goal of the march has consistently been to overturn Roe, the landmark Supreme Court decision which made abortion legal in the United States on January 22, 1973.

Initial reports put the attendance of the 2020 march at tens of thousands, although it could be as high as 100,000 according to one journalist who attended. These numbers have not yet been independently confirmed.

During his remarks, President Trump catered to religious voters by quoting from the Bible, and arguing that religious freedom is under attack in the United States. “When we see the image of a baby in the womb,” he stated, “we glimpse the majesty of God’s creation.”

Trump argued that “unborn children ave never had a stronger defender in the White House,” and his record on Judicial appointments does seem to back that up. He pointed to his 187 federal judicial confirmations, including those of Supreme Court Justices Gorsuch and Kavanaugh who are seen as potential allies in overturning Roe during upcoming state challenges.

Overall, voters across all religions are more likely to lean Democratic (44 percent versus 37 percent), but voters of certain religious blocs were vital to Trump’s 2016 success. White evangelicals, in particular, voted for Trump with a 75 percent majority. Winning the evangelical vote is important to Trump’s 2020 election.

“If we don’t reverse course now,” wrote Mark Galli, “will anyone take anything we say about justice and righteousness with any seriousness for decades to come? Can we say with a straight face that abortion is a great evil that cannot be tolerated and, with the same straight face, say that the bent and broken character of our nation’s leader doesn’t really matter in the end?”

The article compared the “immoral acts” of President Clinton 20 years ago to President Trump’s actions with Ukraine, arguing that no longer could Christians defend him. The article also chastised Trump for his behavior toward women in general.

Christianity Today has consistently been against the legalization of abortion, with an editorial record on the topic dating back to 1973. The same can’t be said for Trump, who was pro-choice until 2011 when he joined the Republican party to run for President.

In 2011, Trump told CNB that he changed his views after a friend of his changed his mind when the couple originally decided to have an abortion. He told the reporter, “He ends up having the baby, and the baby is the apple of his eye. He says it’s the greatest thing that’s ever happened to him.” (It should be noted that it’s unlikely the man in the story actually had the baby, himself. The woman who originally wanted the abortion is conveniently missing from this happy ending.)

Trump’s change of heart came when he was vying for the Republican nomination after previously identifying as a Democrat and Independent.

Since then, Trump’s views on abortion have gotten increasingly more extreme as he upped his Presidential bids. In 2016, at the height of his campaign against Hilary Clinton, Trump made his most extreme statement on abortion: that the women who have them should face punishment. One in four women will have an abortion in her life, and 45 percent of those women will have multiple. Trump later retracted the statement and clarified that doctors or people performing abortions should be punished, stating, “The woman is a victim in this case as is the life in her womb.”

Trump’s commitment to abortion seems to increase in direct proportion to the seriousness of his Republican Presidential bids. The question of how abortion has impacted his own personal success remains unanswered, though.

In a 2016 interview with the New York Times, Trump dodged a question about if any women in his own life have had abortions. Maureen Down writes that when she asked “was he ever involved with anyone who had an abortion?” Trump responded with “Such an interesting question. So what’s your next question?” Given Trump’s history of extra-marital affairs and reported lack of contraceptive use, it is a reasonable question for anyone concerned about Trump’s commitment to the “right to life”.

Whether Trump’s personal stance on abortion really has evolved over the years or is merely the pandering of a politician who will do anything to win, one thing has been true so far: pro-life voters prioritize the courts over anything else. With decades of dogged determination, those looking to overturn Roe v. Wade have been willing to set aside their moral outrage to pursue a conservative-majority Supreme Court at all costs.

Speaking at the March For Life, Trump said, “They are coming after me because I am fighting for you, and we are fighting for those who have no voice. And we will win because we know how to win.” This message apparently resonated with the crowd, which burst into applause.

That Trump is “a human being who is morally lost and confused,” as Christianity Today put it, has so far been irrelevant to values voters. The tactic seems to be working, and liberals and Democrats who prioritize ideological purity over political strategy seem unable to counteract it. In only three years, Trump has already appointed more Federal judges (187) than any President since Bill Clinton (188). The impact of these lifetime appointments will be felt long after Trump has left office, whether that’s now, in 2021, or after four more years.

Meanwhile, support for Roe v. Wade is at an all-time national high at 71 percent, including a slim majority of Republicans (51 percent). Trump’s outreach to the pro-life minority at the March for Life rally demonstrates the power of this voting bloc to shape Presidential outcomes. White evangelical turnout will be as vital to him in 2020 as it was in 2016, and the March For Life is the perfect way to campaign to values voters.