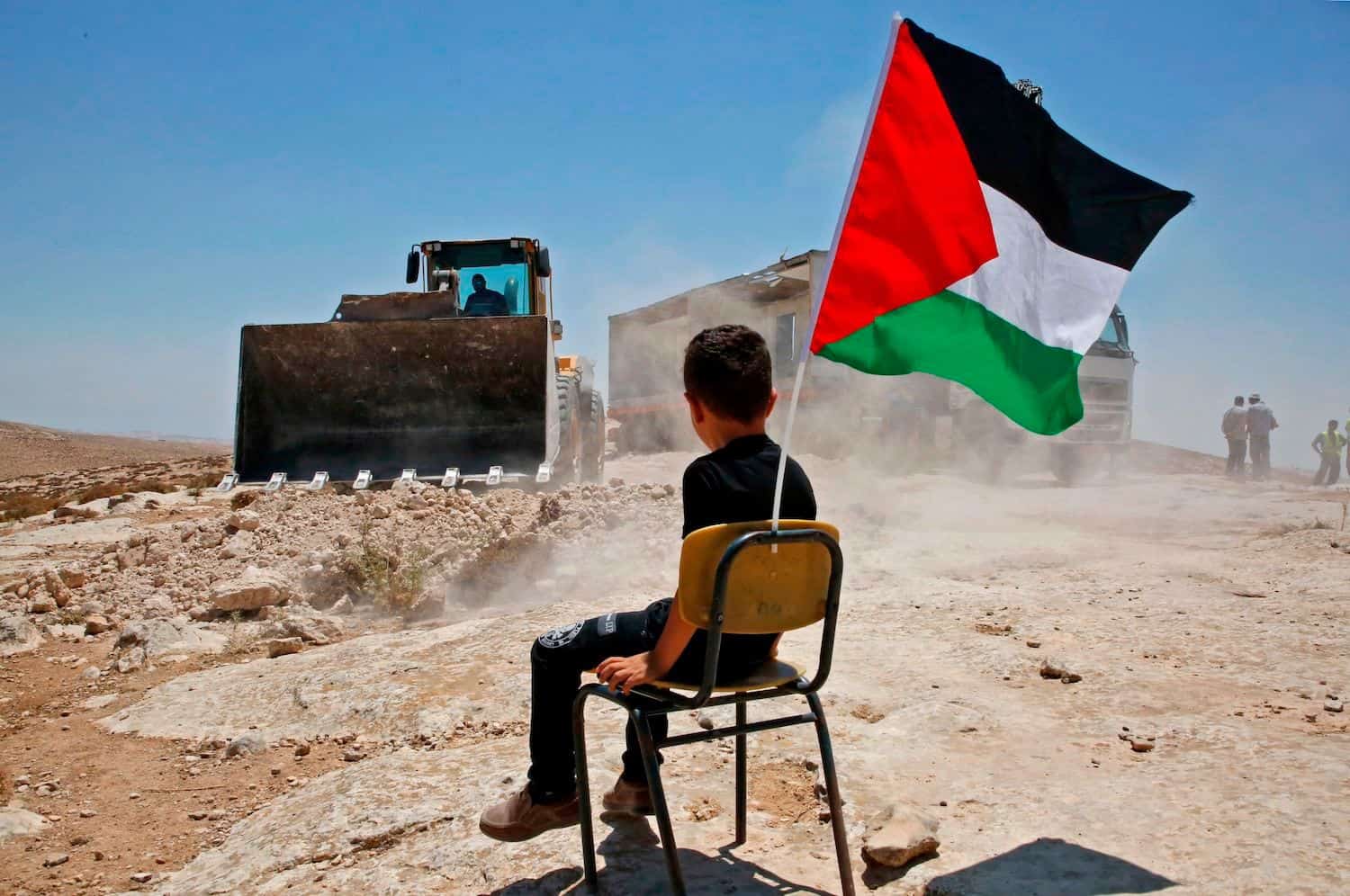 A Young Palestinian sit with a national flag as Israeli authorities demolish a school site in the village of Yatta, South of the West Bank city of Hebron on July 11 2018. (Photo credit HAZEM BADER/AFP via Getty Images)

President Trump announced his plan for peace between Isreal and Palestine on Tuesday. The plan was met with immediate backlash when it became clear that the plan was made without any input from the Palestinian leadership and with little regard to Palestinian interests.

Trump announced the plan with Israeli President Benjamin Netanyahu, who is facing a tough election as well as corruption charges, which were also announced on Tuesday. The peace plan was largely formulated by Trump’s son-in-law, Jared Kushner, in consultation with the Israeli government. Palestinians withdrew from the peace talks in 2017 when Trump recognized Jerusalem as Israel’s capital amid international protest.

Protests took place Tuesday morning in the West Bank and Gaza strip prior to the release of the deal on Tuesday. Palestinian Authority President Mahmoud Abbas rejected Trump’s plan, stating, “We say a thousand times, no, no, no to the deal of the century.”

The plan, titled “Peace to Prosperity” is made up of two parts, the economic plan released last June, and the 181-page political plan released on Tuesday. The political plan includes a roadmap to a potential “two-state” solution, but with significant limitations on the sovereignty of the Palestinian state.

The conceptual map of the two states gives most of the Gaza Strip and West Bank to Palestine. The two regions, which occupy opposite sides of the current state of Israel, would be connected by a 25-mile (40km) underground tunnel. The Palestinian state would be entirely surrounded by Israel on all sides, and Israel would be responsible for maintaining its border security.

The peace plan hands over contested land in the West Bank that is currently Israeli occupied to Isreal. The annexation of the West Bank settlements has been a central part of Netanyahu’s right-wing policy and reduces the Palestinian West Bank territory significantly, including the Jordan River Valley. Israel has maintained that holding the border is necessary for its security given the history of attacks from Jordan. Netanyahu has announced plans to begin the annexation of this territory as soon as Sunday.

The conceptual map provides additional “land swaps” to the Palestinian state in Negev Desert in exchange for the West Bank Settlements.

The plan also names Jerusalem as Israel’s “undivided capital”. Holy sites for both the Muslim and Jewish religions reside in Jerusalem, which both parties claim a right to. The Palestinian capital would be established in the northeastern suburbs of Jerusalem, and Temple Mount would remain under Jordanian custodianship.

An Eastern Jerusalem capital has long been central to the Palestinian demands. The UN Security Council Resolution 478 condemned Israel’s decision to annex East Jerusalem as a violation of international law. The US plan rejects the UN’s call for a compromise solution by turning Jerusalem entirely over to Israel.

Israel will be responsible for the “overriding security responsibility for the State of Palestine” including managing their borders. The Palestinian state would not be permitted to raise a military or secure itself against Israel in any way, and may only maintain security forces for counter-terrorism efforts in collaboration with Israel, and internal policing.

The plan frames this as a benefit for Palestine, stating, “Every country spends a very significant sum of money on its defense from external threats. The State of Palestine will not be burdened with such costs, because it will be shouldered by the State of Israel.”

“Not only would the future state of Palestine not be permitted to develop its own “military or paramilitary” forces”, writes Zach Beauchamp for Vox, “but Israel would also maintain full security control over Palestinian territory until it decides not to. And if at any time Israel changes its mind, it is within its rights under the deal to retake military control.”

If Hamas, the Palestinian militant Islamist organization, wants any role in the future Palestinian government, it is required to recognize Israel and commit to non-violence.

No right of return for refugees

Trump’s plan states that there will be no “right of return” for the seven million displaced Palestinian refugees. Hundreds of thousands of Palestinians were originally displaced in 1948 during the creation of Israel, and those refugees and their descendants have mostly remained stateless since.

The signing of the plan would eliminate the Palestinian refugee status, and allow some refugees to enter the new Palestinian state at a rate so as not to “overwhelm the development of infrastructure and the economy of the State of Palestine, or increase security risks to the State of Israel.”

It remains to be seen how Palestinian leaders will respond to the proposed plan following their outright rejection. In an interview with Vox, Ghaith al-Omari, a former adviser to Abbas, argued that the plan was dead on arrival:

“In diplomatic terms, it’s dead,” he stated. “Once the Palestinians and the Arab states take a clear position, then the Europeans will follow suit, and the Russians would come on board, and in the end, we’re likely going to end up with a plan that is only truly supported by the US and Israel, and maybe some marginal countries.”

Abbas met with leaders from Hamas after the announcement of the Trump plan on Tuesday, which appears to have sparked a feeling of unity between the two groups. There are rising fears that the plan, which Abbas described as a “slap”, will push the Palestinians towards a violent response. Tensions remain high as Israel, emboldened by the plan and Trump’s support, moves to illegally annex the West Bank in the coming days.