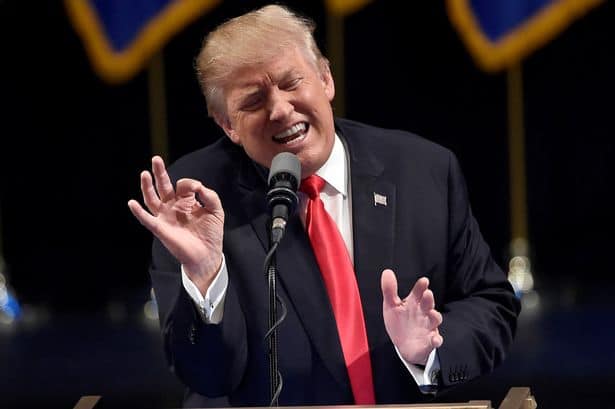 The President of The United State Donald J. Trump

Trump’s Presidency has been built on lies from the beginning. In his first 1,000 days in office, Trump made a whopping 13,435 false or misleading statements. The Washington Post has been obsessively tracking the President’s lies, counting over 16,000 as of January 2020.

The President’s most repeated lie is also his biggest strong suit⁠—the economy. Trump has repeated the claim that the economy is the “best it’s ever been” at least 257 times during his Presidency. Although the economy was strong leading into the current crisis thanks to the upward trends started by President Obama, it’s still not as good as it was under Presidents Eisenhower, Johnson, Clinton, or Grant.

Trump’s lies may have finally reached a tipping point, though. As the novel coronavirus (COVID-19) spreads across the world, the importance of science and reality in a world of “alternative facts” is becoming more and more apparent.

Trump has been waging a war on science from within his administration, though. Back in 2016, The New Yorker reported “1984-style” efforts by the administration to undermine science, particularly in regards to addressing climate change and the Environmental Protection Agency (EPA). The administration has consistently been full of science deniers, including former EPA Administrator Scott Pruitt, former Energy Secretary Rick Perry, former Attorney General Jeff Sessions, and Vice President Mike Pence.

Pence is charged with leading the coronavirus taskforce, a move which has prompted criticism given his public health failings as the Governor of Indiana. In 2013, Pence slashed funding for public services and healthcare in Indiana and continued to ignore the advice of public health officials until 2015. The result was the worst outbreak of HIV in Indiana’s history. Over 200 new cases were diagnosed by the end of the crisis. His moral opposition to needle exchanges, which are a proven solution to the spread of sexually transmitted diseases, was a major factor.

Now, Trump expects the American public to trust his administration during this time of crisis. As the US closely tracking Italy’s outbreak pattern, the spread of the virus is only expected to worsen and the need for strong, decisive, and science-based leadership becomes all the more clear. Trump, however, seems to have something else in mind.

With the 2020 election looming, Trump has seemed more concerned about downplaying the potential impact of the virus (on both public health and the economy). Trump’s lies have gone beyond the egotistical (like about the size of his inauguration) to downright dangerous in the face of a global pandemic.

On January 22nd, when the virus had already spread from China to four other countries (including the US) and the city of Wuhan was about to be closed down, Trump played down the seriousness of the threat.

“We have it totally under control,” he said. “It’s one person coming in from China, and we have it under control. It’s going to be just fine.”

On January 30 the same day the World Health Organization declared virus to be a “public health emergency of international concern.”, Trump’s lies continued as he claimed, “We have it very well under control. We have very little problem in this country at this moment — five. And those people are all recuperating successfully.” Nearly 8,000 cases had already been confirmed at that point.

The next day, Trump the decision to shut down travel from people who had been to China. It was a good move that likely did slow the spread of the virus and buy us time, but Trump didn’t use that time to prepare the country for the inevitable by ramping up health care capacity, pushing out tests, or calling for measures to be taken. Instead, he claimed that this move would unilaterally stop the virus from spreading to the United States. “We pretty much shut it down coming in from China,” he said.

This also turned out to be false. By this point, a community spread within the US had already started.

Trump continued to lie about the likelihood of the virus spreading in the country. As David Leonhardt wrote for the New York Times, “His message was clear: Coronavirus is a small problem, and it is getting smaller. In truth, the shortage of testing meant that the country didn’t know how bad the problem was. All of the available indicators suggested it was getting worse, rapidly.”

On February 29th, the President claimed that a vaccine was being developed “very rapidly”. Experts, however, say that we are still many months away from a mass-produced vaccine. Its unlikely one will be widely available until Christmas at the earliest.

On March 11th, Trump finally addressed the nation about the spreading pandemic. His oval address, meant to convey a sturdy and somber attitude, was full of mistakes and inaccuracies which send the country into a panic.

The worst example was Trump’s claim during the address that all travel from Europe would be halted – including trade. The announcement sent Americans abroad into a rush to get home, leading to chaos in European airports (at a time when crowds are the last thing anyone needs).  In Barcelona, for example, Americans waited in five-hour lines only to discover that tickets were unavailable or unaffordable.

The travel ban did not, however, apply to citizens, legal residents, or their family members. All the panic was for nothing.

Trump also stated during the same address that health insurance companies had agreed to “waive all copayments for coronavirus treatments.” This was also not true.

During a Friday news conference from the Rose Garden, the misinformation continued. Trump falsely blamed the shortage of tests on the Obama administration, claimed that testing was unimportant during the H1N1 swine flu outbreak, and refused to take responsibility for his administration dissolving the White House pandemic office.

Trump also exaggerated claims about a website being developed to help coordinate testing. “Google is helping to develop a website,” he said, “It’s going to be very quickly done, unlike websites of the past, to determine whether a test is warranted and to facilitate testing at a nearby convenient location.”

Google, however, quickly put out a statement clarifying.

The website is not being developed by Google, itself, but rather Verily, a subsidiary of Google’s parent company, Alphabet. The website is also not going to be immediately widely available. Its release is currently only planned for the Bay Area.

All of the lies and misinformation have led to a major lack of trust of the system among the American public. When Trump and his cronies have spent the past four years attempting to dissolve public trust in science and American institutions, it’s no surprise that now this problem has come back to haunt him.

In the past few days, Trump tone seems to have changed. He is taking the crisis more seriously, calling on the American public to do their part to flatten the curve, and signing emergency measures that should have been done two weeks ago. The change may come as a result of a new study released by the UK’s Imperial College COVID-19 Response Team. The study demonstrates just how bad things might get in the US if inaction had continued. In short, it would be devastating.

Still, the lies continue as he attempts to rewrite history to make himself out to be the hero.

“I felt it was a pandemic long before it was called a pandemic,” he told reporters on Tuesday, continuing his pattern of gaslighting the citizenship.

It’s not just Americans who are losing faith in Trump, though. Across the world, faith in the United States has been eroded, even among our political allies. The Trump administration set new lows for international approval of the US in 2018. When Trump abandoned our Kurdish allies in 2019 in Syria, another wave of international outrage against the United States arose. Now, as the global interdependence of nations is more clear than ever thanks to COVID-19, Trump has taken to blaming our international allies for his own failings.

In times of crisis, the President of the United States has been seen as a paternal figure who can guide the country, and indeed the world, through periods of hardship. The coronavirus has made many things clear—not the least of which being that times have changed. Thanks to Trump’s lies, neither Americans nor the world have a trusted captain to steer the ship through the storm that lies ahead. Any measures that he’s now taking are weeks too late. By all forecasts, it’s only going to get worse.