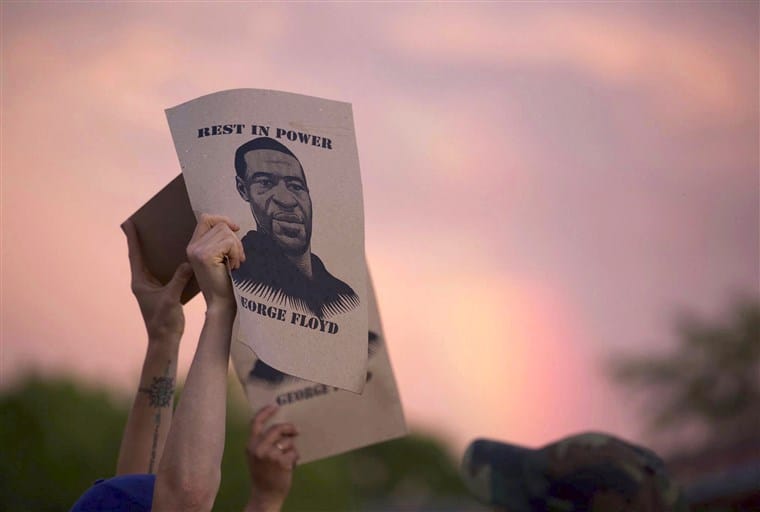 The spotlight is back on police brutality in the US following the death of unarmed black man George Floyd. Last Monday, employees at a Cup Foods store in Minneapolis, Minnesota called authorities to report a counterfeit $20 bill. Police arrived on the scene and the employees reportedly directed them to George Floyd, who was sitting with two other people in a car parked near the store.

Two officers approached Floyd at the driver’s side of the vehicle. Body camera footage showed that Officer Thomas Lane eventually pointed his gun at Floyd while he was still seated in the vehicle, prompting Floyd to place both hands on his steering wheel. Lane then demanded he exit, citing an arrest for passing counterfeit currency.

The two officers on scene at the time tried to get Floyd into the back of their vehicle but he was not complying. “I can’t breathe,” he told them, reminiscent of Eric Garner, killed by excessive police force in 2014.

Two more officers, including Derek Chauvin, arrived on the scene to assist. Chauvin eventually pulled Floyd from the passenger side of a vehicle he was sitting in and had him face down on the ground while handcuffed. While Lane and Officer Alexander Keung held Floyd’s legs, Chauvin placed his knee at the back of his head and neck and stayed there for about eight minutes.

Long after Floyd had stopped moving, and for three minutes after he had lost a detectable pulse, Chauvin was defiant in holding his position. The criminal complaint against Chauvin claims another officer suggested Floyd be rolled over off of his stomach, but Chauvin verbally refused to comply. “No, staying put where we got him,” he replied.

Had it not been for a cell phone video recorded by a bystander, the truth of Floyd’s agonizing death may never have come to public light. The Minneapolis Police Department initially claimed that his death was caused by his own erratic attempts at resisting arrest, but the video showed Floyd as an often compliant man who seemed to be suffering from a medical emergency.

George Floyd, who called out for his late mother with his dying breaths, may not have known that he had passed a counterfeit bill to the store since well-made fakes are hard to spot.

All four officers on the scene were fired from the department. Chauvin was arrested on Friday and will be prosecuted for murder, but that may offer too little too late for centuries of race-related violence. George Floyd is the latest on a list of black bodies, including Eric Garner, who died at the hands of excessive force perpetrated by a white officer during an attempted apprehension for a non-violent crime.

War in the Streets

In spite of Chauvin’s arrest, citizens are rising in mass against the American police state. Protests broke out in cities all over the country to demand justice for Floyd, but also for those who died before him.

In Minneapolis, the National Guard has been deployed to work in tandem with militarized police forces to enforce a curfew order. A video shared to Twitter shows troops marching through a neighborhood, yelling at people who were on their porches recording tanks driving down their street. When one of the troops yelled “light ‘em up,” they began shooting gas canisters at bystanders running into their homes.

In a controversial decision, Twitter has put fact-checking labels on select tweets from the U.S. President Donald Trump. Now, he is threatening to have the company “shut down” for it.

One tweet, regarding mail-in ballots and election fraud, was flagged as containing misinformation.  Another tweet, in which Trump called protesters “THUGS” and claimed “when the looting starts, the shooting starts,” was flagged for glorification of violence.

Users must now click through Twitter disclaimers to see those tweets. Trump has claimed this is only an attempt to further silence conservative voices and says he will “strongly regulate” or even close down social media platforms for it.

A SpaceX Crew Dragon capsule carrying two astronauts arrived and docked at the International Space Station Sunday morning after launching the day before.

The craft was designed by Elon Musk’s SpaceX company and was the first spacecraft to lift-off from American soil since 2011. It was also the first time a commercial aircraft was used to carry NASA astronauts into space.

The astronauts will soon be joining the crew already on board the space station to assist in the study of microgravity.