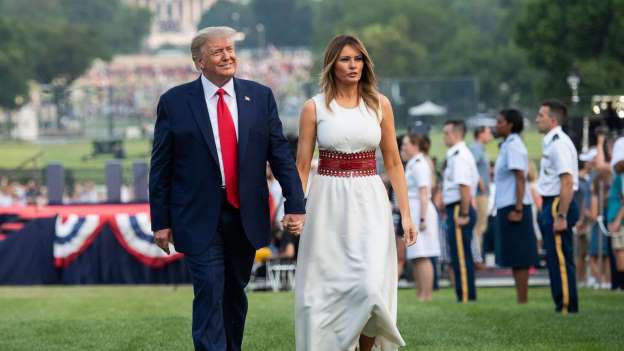 U.S.  Pres. Donald Trump continued to actively disjoint the nation he was elected to lead over the Fourth of July weekend, foregoing a chance to unify a fractured country. The president missed the opportunity to unite the nation in a time of grief but instead compare some dissatisfied Americans to “Nazis” and “terrorists.”

Presumably, in reference to ongoing Black Lives Matter protests, Trump told his supporters on Friday that “we are now in the process of defeating the radical left,” a group which he then compared to a variety of America’s wartime enemies.

Trump made clear that he stands counter to a movement calling for vast systemic reform. Protesters have demanded full societal inclusion, including proper police services and protections for Black citizens who historically have been abused and murdered by officers at disproportionate rates.

Despite the calls to action, Trump used the holiday celebrations to promise to disallow any attempts “to tear down our statues, erase our history, indoctrinate our children or trample on our freedoms.”

Trump used a Fourth of July event at the White House to try and diminish the perception of severity around the Covid-19 global pandemic by claiming that 99% of cases have been found to be “totally harmless” thanks to the “quality” of U.S. testing.

The World Health Organization has estimated that the fatality rate for the virus worldwide is now below one percent, but an estimated 20% of those who are diagnosed have symptoms severe enough to require hospitalization. Therefore, Trump’s percentage for “totally harmless” infections seems much too high.

Commissioner of the U.S. Food and Drug Administration Dr. Stephen Hahn later emphasized to CNN that the U.S. must take the virus “seriously”.

“What I’ll say is that we have data in the White House task force. Those data show us that this is a serious problem. People need to take it seriously,” Hahn said, without speaking directly to the validity of the president’s comment.

Iran Declares Trump Under Arrest for Deadly Attack on Soleimani

On Monday, Iran issued an arrest warrant for Pres. Trump in relation to the death of Commander Qasem Soleimani, who was killed in a January drone strike in Baghdad.

Interpol (or the International Criminal Police Organization) was asked to arrest and extradite Trump and 35 others, though it seems unlikely they will honor the request. A representative told CNN that “it is strictly forbidden…to undertake any intervention or activities of a political, military, religious or racial character.”

Soleimani and five others were killed in an attack at Baghdad International Airport, an unprovoked strike which was labeled an assassination by Iran and its allies.

Trump was defiant of the label, telling reporters that Soleimani should have been killed sooner. The Pentagon also defended the attack as a “decisive defensive” strike meant to prevent future American deaths.

U.S. officials have dismissed Iran’s request as a political stunt.

The trial for the 2018 murder of Saudi Arabian journalist Jamal Khashoggi began in Instanbul, Turkey, on Friday. Though none were not present at trial, 20 Saudi Arabian citizens are accused of participating in Khashoggi’s killing and coverup. They have been shielded from extradition by the Saudi government.

Turkish authorities are seeking life sentences for the men, who they believe lured Khashoggi to the Turkish consulate under the guise of obtaining paperwork necessary for him to get married. Khashoggi was presumed to have been murdered and dismembered inside the building thanks to audio tapes.

Saudi Arabian Crown Prince Mohammed bin Salman is widely believed to have helped plan the murder to punish Khashoggi for dissenting against the Saudi government, including in his role as a journalist for The Washington Post.

Though there was a private trial in Saudi Arabia, many details have not been released, including the names of the convicted. Some believe it was simulated to protect members of the royal family and those who work closely with them.

The trial in Turkey is the first public trial for the killing and it targets the group of men, including some connected to Saudi royals, who are widely believed to have planned and carried out the assassination.

Due to torrential rains in southern Japan, over 200,000 people were asked to evacuate and at least 15 are presumed dead, most after getting trapped in a nursing home.

Japanese meteorologists had predicted severe rainstorms but the reported rainfall was heavier than any ever recorded in the area, dropping at more than four inches an hour.

Mudslides and flooding knocked down power lines and disconnected tens of thousands of phone lines. The rains swiftly washed away trees and parts of houses.

The downpours have subsided for now and emergency responders have started search and rescue efforts, but substantial rainfall is expected to continue in the area through Wednesday.