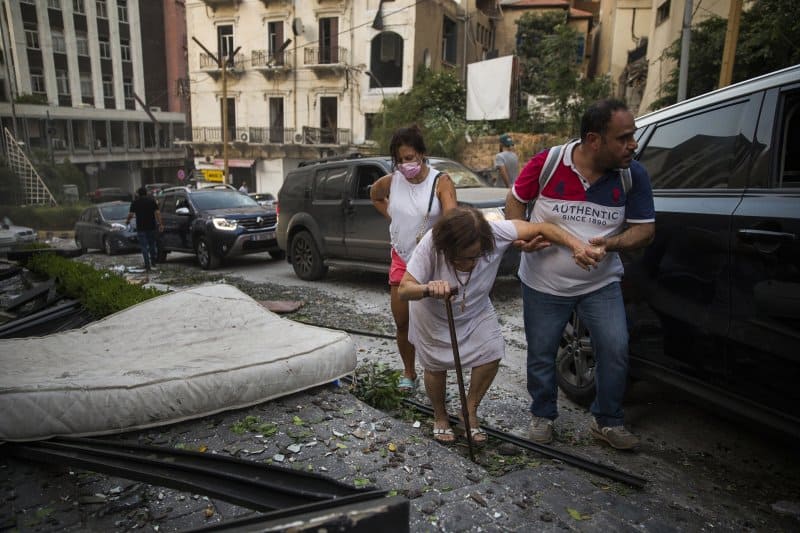 BEIRUT, LEBANON - Survivors in the debris of the August 4, 2020 explosion (Photo by Daniel Carde/Getty Images)

A Tuesday explosion at the Beirut port killed at least 158 people, injured thousands more, and caused up to $15 billion in damage to more than half of the city.

Approximately 300,000 people are now homeless in Beirut due to the blast, which officials from Lebanon admitted was ignited when the fire reached a stockpile of fertilizer chemicals stored alongside fireworks in a port warehouse.

Port workers reported being aware of dangerous explosives being stored inside the warehouse for several years, and authorities claimed to have made numerous unanswered requests for legal permission to remove the chemicals.

Almost 20 people have been detained for negligence leading to the Beirut blast, including the port’s chief.

French President Emmanuel Macron called open an international aid summit to help “act quickly and effectively to coordinate our aid on the ground.”

Lebanon has been in a distressing state of crisis and the long term effects of the explosion could be catastrophic to hopes for economic recovery.

Trust in the Beirut government has been further diminished by the tragedy and in its wake. Volunteers have reported that they have been cleaning up the wreckage with their supplies in the absence of assistance from state cleanup crews.

On Saturday in Beirut, protesters battled security forces for hours in the streets and government buildings, resulting in the death of one police officer who fell while being chased.

With coronavirus relief talks stalled in Congress, Pres. Trump signed a package of executive orders on Saturday to provide temporary assistance to the country. Trump said the orders would “save American jobs and provide relief to the American worker.”

The individual orders will provide $400 in weekly unemployment payments, defer some student loan payments, reduce evictions, and suspend specified payroll taxes through the end of the year. Those taxes include payments to Social Security and other programs.

Though the last relief package was entirely federally funded, Trump has mandated states to cover a portion of the cost in the most recent orders. This would be a problem for many states which have suffered severe economic impacts from the pandemic.

Since Congress is given power over federal spending through the Constitution’s checks and balances, these measures will possibly face legal challenges.

House Speaker Nancy Pelosi claimed that negotiations had stalled because, even though the Democrats had lowered their bill to $2t, Republicans wanted to pass a $1t bill. She scoffed at the president’s orders, calling them “unworkable, weak and narrow policy announcements.”

At the time, it is uncertain if talks on stimulus checks and further relief for the American people will continue in Congress.

On Thursday, Trump also used executive order to effect a ban on TikTok in the U.S., citing concern over user data being provided to China, where Tik Tok is claimed as a domestic company.

After 45 days, transactions between U.S. companies and ByteDance, the Beijing-based parent company of Tik Tok, will be banned.

Secretary of State Mike Pompeo said earlier this month that the ban could punish China for the coronavirus. Still, Trump could also be acting on resentment towards Tik Tok users, who started a viral effort to reserve tickets to his highly publicized Tulsa rally in June.

The event’s turnout was embarrassing for the president, but partly because he had exaggerated expected attendance before the rally, which experts had warned against holding or attending in the first place due to the spread of Covid-19.

Microsoft is reportedly now in talks to buy the app.

An independent commission’s report has disputed information from prosecutors suggesting 44 men who died in one night in the same jail cell were Boko Haram militants who had poisoned themselves.

The National Human Rights Commission has claimed that the prisoners were farmers and villagers who had been arrested without reason and left to die in inhumane conditions.

A group of survivors told the commission that they were kept in an overcrowded cell and left in high temperatures without water or food, which led most of the prisoners to weaken and eventually die.

Chad’s Justice Minister announced an inquiry to determine who is responsible for the deaths of the prisoners in response to the commission’s report.