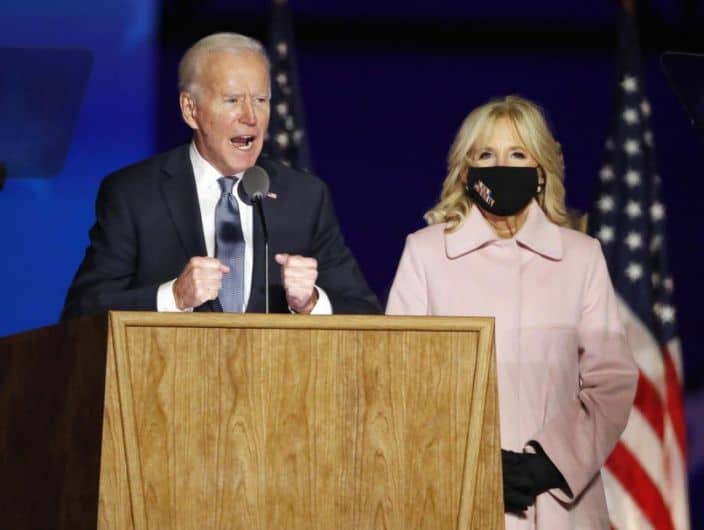 Joe Biden speaks as he stands with Dr. Jill Biden at his Election Night event at the Chase Center in Wilmington, Delaware, USA, 03 November 2020. (EPA-EFE)

After days of counting votes in a few crucial states, former Vice President Joe Biden has been named the projected winner of the 2020 presidential election. The race was called following Biden’s win in Pennsylvania.

It was too close to call for days, but Biden held onto Nevada and eventually pulled ahead in both Georgia and Pennsylvania. Only hours ago, he was awarded the delegates needed to claim a victory.

Biden is the United States’ projected 46th President. At 77 he would be the oldest person to ever serve.

His running mate, Kamala Harris, is the first woman, the first Black person, and the first Indian American person to even be projected as vice president in U.S. history.

President Trump remains defiant in spite of the news. He has not conceded and continued to claim a win for himself as of this morning.

In the hours following Election Day, Trump was on a triumphant high.

Soon after, the panic of reality was clearly setting in. The mail-in ballots, which he had told his supporters not to use were coming in heavily in favor of Biden.

A defiant Trump became increasingly desperate to invalidate the results of those incoming ballots with each day.

The president again crowned himself as victor only shortly before reports of Biden’s projected win began to circulate.

Rudy Giuliani announced that Trump will not concede the election just before Biden was declared the projected winner. He cited a yet unfounded claim of hundreds of thousands of questionable ballots.

The states that made the election

The election came down to a handful of states, but few were as important as Georgia and Pennsylvania, which carry 36 delegates together.

In Georgia, an initial total had Biden ahead by less than 2000 votes. This prompted a quick announcement from the Republican Secretary of State that there will be a recount due to the incredibly small margin.

Only hours ago, Pennsylvania was finally called as a win for Biden. Officials in the state have defended the integrity of their election procedures from Trump’s attacks as he has been trying to fight much of their post-Election Day process.

Though Trump and some of his associates voted by mail in various contests, he was publicly critical of the practice. He encouraged his supporters to vote in person, while Biden was encouraging voters to use mail-in ballots to avoid virus spread.

Trump has attempted to invalidate as many mail-in ballots as he can, using both Twitter and his legal team to launch a multi-faced attack on ballots. In spite of states having their own laws around elections, he has repeatedly demanded they stop following their laws and obey him.

The president has made it clear that his fight to exclude votes is not over. His legal team has been frantically filing lawsuits in multiple states in a desperate effort to win any way they can.

There is no substantial evidence to support a widespread conspiracy to steal the election from Trump through fraud. He could try to get the issue before the three Supreme Court justices confirmed in his presidency. If this happens, it could be a direct test of their loyalty to Trump.

Meanwhile, a special counsel has been opened to investigate the president’s use of the White House as an Election Day campaign headquarters. The president reportedly used an office building as a “war room” to watch updates on the election. He was also receiving official briefings from executive branch employees throughout the day.

The counsel will examine whether this violated the Hatch Act, which prevents federal employees from engaging in political activities on the job.

Biden’s path to the general election was steep. In spite of his eight years in the White House as President Barack Obama’s vice president, he was not an instantly popular choice to run against Trump.

The pool of options for a Democrat candidate for 2020 began with 27 choices who were often at political odds. A slew of popular Democratic figures, including senators Bernie Sanders and Elizabeth Warren, joined the race for the Democratic nomination.

Voting for the Democratic primary elections opened with chaos in Iowa in February 2020. Mayor Pete Buttigieg eventually declared a highly contested victory, with Sanders officially marked in a close second and Warren in third.

Biden trailed his opponents in the first few states and debate performances. A political history as peppered with controversy as his was easily exploited on the debate stage.

But then his luck changed quickly, which was hardly coincidental. He was boosted by an invaluable endorsement from Rep. Jim Clyburn on Feb. 26th. This arguably helped to score his first win in the South Carolina primary on Feb. 29th.

He then received a Super Tuesday surge in March, catalyzed by concessions and lighting-fast support from other primary contenders. Pete Buttigieg and Sen. Amy Klobuchar both dropped out and promptly endorsed Biden in the days just before Super Tuesday.

In April of 2020, Sanders, who was Biden’s strongest and arguably most dynamic contender, suspended his campaign. He promptly put his support behind the former vice president.

It was not until August that Biden formally accepted the nomination of the party at the Democratic National Convention. After ongoing media speculation on a running mate, Biden announced Harris as his choice.

What to expect now

Trump will undoubtedly mount more legal challenges to try and overturn the election. Some speculate that he may even need to be physically removed from the White House.

His media allies, some of whom are trusted to him but not generally trusted, have whole-heartedly supported his unfounded claims of a stolen election.

Their rhetoric has not gone unnoticed. Two illegally armed men from Virginia were arrested outside the Philadelphia Convention Center and were planning to stop the vote count by force.

However we make it out of 2020, we may see one Trump or another running for Republicans on the 2024 presidential ticket. If one thing became crystal clear over the last four years, it would be that the Trumps are working on solidifying their own, dysfunctional as it may be, political dynasty.

All current projections indicate that Joe Biden will be inaugurated in January of 2020. But that still leaves many days for America to expect the unexpected from President Donald Trump.