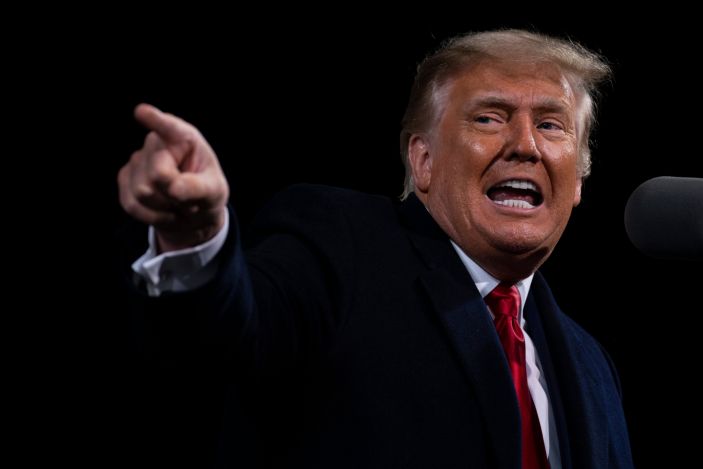 The US Supreme Court has rejected an extraordinary attempt to dismiss election results in four crucial states. The lawsuit, filed by the state of Texas, was backed by President Trump and sought to invalidate results in Georgia, Michigan, Pennsylvania and Wisconsin.

President-elect Joe Biden won those elections and state courts upheld the individual wins. The SCOTUS effort was still supported by a group of state attorneys general and more than 100 Republican members of Congress.

Of course, Trump took to Twitter to denounce the Supreme Court after the justices rejected his latest attempt to overturn last month’s presidential election.

“You can’t have a country where somebody loses an election and becomes president,” Trump complained.

Throughout Trump’s re-election effort, more than 30 lawsuits have failed in various state courts. Trump has still refused to concede the election, in spite of that.

On Saturday, thousands of people crowded in DC for the second Million MAGA March in support of Trump. Members of the crowd chanted “stop the steal” and “destroy the GOP”.

Police reported that the rally remained mostly peaceful throughout the day, though there were some arrests.

However, multiple stabbings were reported to have occurred in the early hours of Sunday morning. Members of the extremist Proud Boys group met with counter-protesters in the streets.

More than 23 arrests were reported in relation to violent clashes.

The Senate approved a temporary funding measure to avoid a government shutdown, only hours before a critical deadline on Friday.

The president signed the bill Friday evening, which authorized short-term funding of agencies which would have run out of money only hours later.

The bill does not include direct payments to Americans, an issue Sen. Bernie Sanders promised to object next week when the measure’s funding expires.

“I will not be prepared to withdraw an objection next week,” he promised while speaking on the Senate floor. “We will deal with the financial crisis facing tens of millions of Americans.”

Pfizer Vaccine Approved by FDA, First Round to Begin in US on Monday

The US has initiated the process of distributing Pfizer/BioNTech coronavirus vaccines after receiving authorization for emergency use by the FDA.

A few million doses of the vaccine were reportedly shipped this weekend for distribution beginning on Monday. The vaccine offers up to 95% protection against Covid-19.

Anyone who has previously had a severe allergic reaction should not have the Pfizer/BioNTech vaccine without consulting a doctor, according to experts. Rare cases of anaphylactic shock were reported during the UK’s rollout of the vaccine.

The vaccine could not get to American citizens soon enough as the US reported a daily record of 3,309 Covid-related deaths on Saturday. It is the highest total in a single day from anywhere worldwide.

In breaking with a precedent established for over 130 years, Trump has pushed forward with federal executions in spite of the presidential transition.

After the US Supreme Court rejected down-to-the-wire clemency pleas on Thursday, Brandon Bernard was executed by lethal injection.

A teenaged Bernard was convicted of murder in 1999. He is the youngest person to be executed by the federal government in roughly 70 years.

Bernard was identified as a low-ranking member in a group of four teens who murdered a Texas couple.

Another defendant was executed earlier this year for the couple’s shooting deaths. Bernard allegedly doused their vehicle with gasoline and lit it on fire after they were shot. Trial experts claimed that one of the victims was still alive, as evidenced by smoke inhalation.

The defense argued that was not proven. They argued that Bernard believed both victims were dead when he followed orders to light the car ablaze. Furthermore, they alleged he did so out of fear for his own life.

Several jurors from Bernard’s trial publicly expressed regret over their decision to bypass life in prison for the death penalty. A prosecutor even suggested that racial bias may have influenced the all-white jury’s decision.

Four more executions are planned before Trump’s presidency ends on January 20. If all move forward, he will oversee the most executions by a US president in more than 100 years.

Worldwide carbon emissions dropped by 7% during 2020’s global lockdown. This is the biggest drop ever, according to new research.

The Global Carbon Project, a group of international scientists dedicated to tracking emissions, calculated that the world will have decreased carbon dioxide output by 40.1 billion U.S. tons in 2020.

Scientists believe this is primarily due to people staying home since transportation makes up a sizable percentage of all carbon emissions. Emissions are expected to increase swiftly after the pandemic ends.