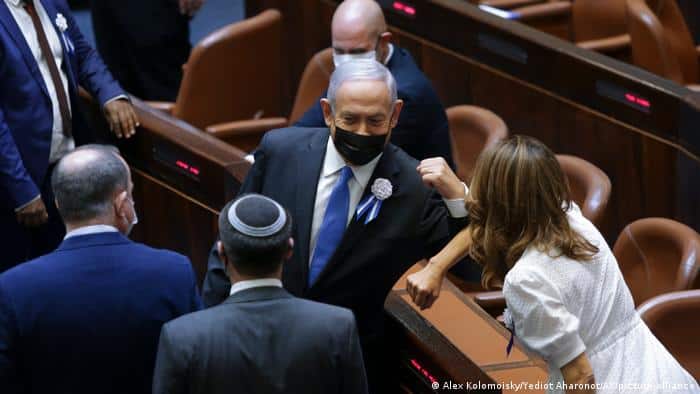 Israel’s parliament is voting to finalize a deal on a new government. The 12-year reign of Prime Minister Benjamin Netanyahu, the longest in Israel’s history, is expected to come to an abrupt end today.

If ratified, the new government would form a coalition of political opposites, including a party to represent the Arab citizens of Israel. Netanyahu’s opponents will need to secure a vote of confidence from a majority of the Israeli Parliament in order to succeed.

Currently, Netanyahu is on trial for corruption charges. He has been accused of bribery, fraud, and breach of trust, though he denies the allegations against him and denounced the attempts to form a new government on Twitter.

Under the new deal, Naftali Bennett would immediately become prime minister for two years. He was once Netanyahu’s chief of staff, so they share many right-aligned political ideas. While he opposes the creation of a Palestinian state like Netanyahu, he has agreed to work with a party of religious Muslims to oust the leader.

Netanyahu promised to parliament he would “topple this dangerous government and return to lead the country in our way” if removed.

G-7 Summit: Biden Pushes Other Leaders to Get Tough on China

In his first in-person meeting with European leaders since taking office, President Biden tried to convince G-7 leaders to be more assertive with the Chinese government.

Some leaders reportedly shared caution about damaging important ties with the economic giant, though they were reportedly receptive to Biden’s concerns.

The US president cited human rights abuses, trade practices, and forced labor as reasons for pushing back on the Chinese government. Notably, many Chinese workers are expected to work six 12-hour days a week for a total of 72 weekly hours. The country’s youth have created a mass movement by ‘lying flat’ to indicate it is better to rest than to work oneself to death.

Leaders agreed to work together to finance an infrastructural counter-effort against China’s “Belt and Road” initiative (BRI). The BRI has “potential to meet long-standing developing country needs and spur global economic growth” but “poses a significant challenge” to US global interests, according to the Council on Foreign Relations.

It is unclear what exactly the leaders agreed on regarding G-7 relations with China.

President Biden is scheduled to meet with Russian President Vladimir Putin on June 16 in Geneva. The summit will be the first between the two leaders, and a contentious exchange of grievances is anticipated.

Biden is expected to confront Putin about Russia’s aggressive global tactics and human rights violations against Russian dissidents. Russian-backed cyber attacks in the US and abroad is also anticipated to be discussed.

Publicly, Putin has praised Biden for his “professionalism” and shared that he hopes the summit will help to renew dialogue between the countries. He also said he would be willing to exchange cyber-criminals with Biden if the two can reach an agreement.

On Saturday, a US district judge ruled that federal law does not prevent employers from issuing vaccine mandates for employers. Hughes dismissed a lawsuit from employees of the Houston Methodist Hospital who refused vaccines.

The hospital suspended 170 employees without pay after months of warnings. Those employees were required to get vaccinated by June 21 to maintain employment. The lawsuit was filed by more than 100 employees who declined to become vaccinated for various reasons. Many said they believed the vaccines are experimental and unsafe, a claim the judge singled out as being false in the ruling.

Others claimed that absent full US FDA approval on the vaccines, employees are protected by federal law from being required to be vaccinated for their job. The vaccines available in the US have been approved by the FDA for emergency use, so petitioners argued anyone who received the vaccine is part of an experiment. The judge’s decision dismissed all of those claims, as well.

Several other major hospitals have issued similar mandates in the last few weeks. Other hospitals are expected to do the same following the ruling by Hughes on Saturday.

Meanwhile, some petitioners shared their intentions to appeal the decision and continue their fight.