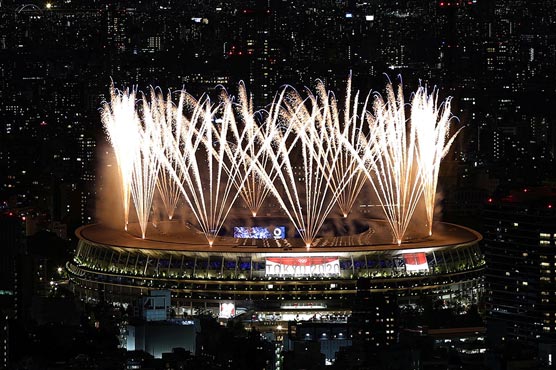 It’s no secret that this year’s Tokyo Olympics have been some of the most controversial games in recent history. Postponed last year due to the coronavirus pandemic, the 2020 Tokyo Olympic officially kicked off with the opening ceremony today.

Unfortunately for the Games, coronavirus concerns and domestic disapproval (a recent poll showed 83% of Japanese do not want the Games to be held in their country) have not been the only negative headlines in recent days.

Just one day before the iconic opening ceremony, the show director Kentaro Kobayashi was fired due to a video emerging of him making a Holocaust joke in the 1990s.

“We found out that Mr. Kobayashi, in his own performance, has used a phrase ridiculing a historical tragedy,” organizing committee president Seiko Hashimoto said. “We deeply apologize for causing such a development the day before the opening ceremony…”

The timing for the Olympics is terrible, but the most recent public embarrassment is only a small sample of a growing pattern in the most controversial Olympics in recent memory.

The Tokyo Olympic Committee took its time postponing the games last year, holding out hope that the most-watched sporting event in the world could be held despite the pandemic.

Ultimately, the games were postponed. Partially due to Japan’s slow vaccination campaign, but also due to the Delta variant causing rising infections in every corner of the world, the Tokyo Olympics have not been able to escape the logistical nightmare of bringing together the world’s top athletes to one location.

Just weeks before the opening ceremony, officials made the difficult decision to ban fans from attending the competition. Due to the pandemic, organizers are also trying to make sure that the games are still entertaining and fun to watch.

Proof of some of the poor PR the games have got, rumors online began circling that organizers had put beds in athletes’ rooms that would collapse if two people were having sex on it. Olympic officials had to scramble to tell fans and journalists that the beds were in fact made of cardboard for sustainability purposes and were not designed to collapse, thus preventing coronavirus infections.

Unfortunately for Tokyo Olympics, the “anti-sex” bed narrative had already taken over the internet.

A Pattern of PR Disaster at the Tokyo Olympic

The Tokyo Olympics did not need any more controversy, especially considering the majority of Japanese are unhappy the event is still being held.

But Olympic officials have been falling like flies to embarrassing controversies that have only ratcheted up ever since the games were delayed.

The most prominent controversy was back in February when the head of the Tokyo Olympic organizing committee Yoshiro Mori resigned after making sexist comments. Mori, a former Japanese Prime Minister, said that women “talk too much during meetings” at an official organizing committee meeting.

Shortly thereafter, Hiroshi Sasaki, a creative chief for the Olympics, had to resign after he said a plus-sized entertainer could put on pig ears and be the “Olympig” at the opening ceremony.

As the games got closer, Japanese officials continued to embroil themselves in controversy. Japanese musician Keigo Oyamada, also on the Olympic creative team, resigned after he said that he bullied children with disabilities when he was a child.

Social media sleuths uncovered magazine interviews from the 1990s where Oyamda boasted about the bullying.

A final blow to the opening ceremony, past controversy finally caught up to the director Kentaro Kobayashi.

The controversies swirling around prominent Japanese male officials have called into question the vetting process of the Olympics. While some were involving recent comments, several of the comments were made many years ago and uncovered by searching YouTube and magazine interviews.

The wide-ranging scandals also have reinvigorated discussions of sexism in sports. While some of the most prominent scandals have involved older Japanese men making statements intolerable to the global Olympics, various teams have also been scandalized.

Swimming was also the source of a racist controversy, as the International Swimming Committee banned Soul Cap, a swimming cap designed for natural Black hair.

The Tokyo Olympics was always facing an uphill battle, but the myriad of controversies swirling around this year’s games shows that organizers have failed to keep up with changing trends in culture.

It also shows that sports remain at the constant cross-section of politics and despite the committed apolitical bent of the Olympics, the global ceremony still represents a political spectacle that can blow up in the face of organizers and administrators.