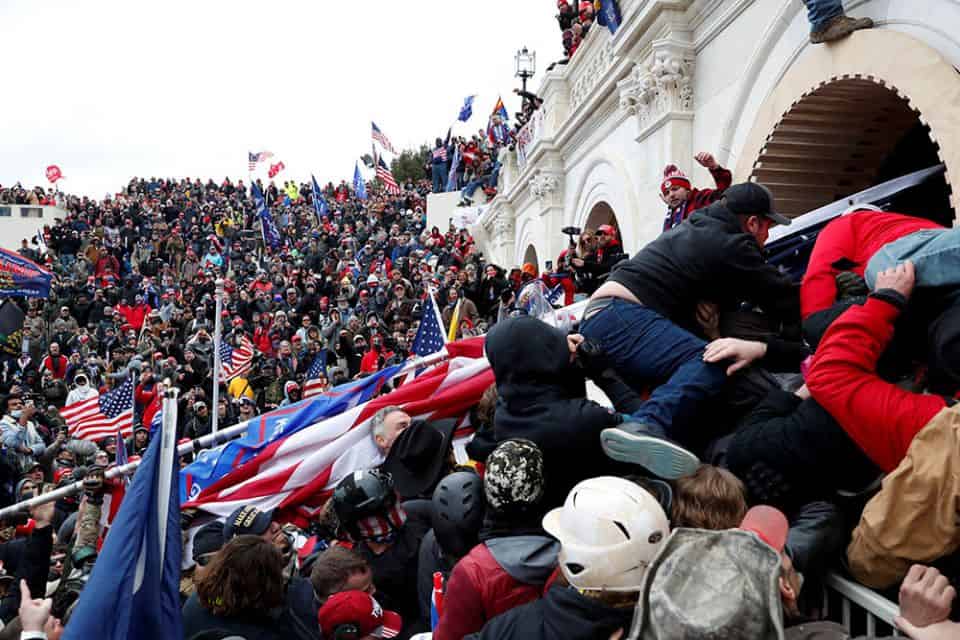 This week, US Capitol Police Officer Harry Dunn testified before a select committee to being pelted with racial slurs on January 6. He claimed to have encountered a mob that chanted “Fucking n—–!” at him and emotionally admitted it was the first time he had ever been called the name while in uniform.

Dunn also honored the memory of late Officer Brian Sicknick, who died only a day after defending the Capitol of what a medical examiner ruled to be natural causes. He reportedly suffered two strokes due to a blood clot coincidental to his involvement in defense of the Capitol. Two men were arrested and charged with assault for attacking Sicknick with bear spray on January 6, but chemical irritants are not documented to have played a role in his death.

Officers who defended the Capitol building are hardly getting any sympathy from the GOP and continue to receive insults from former President Donald Trump and his supporters. Dunn was targeted for racist harassment by far-right groups soon after sharing his emotional account of the traumatic attack and subsequent stresses on his job and life. Previously, Fox News host Tucker Carlson called him “an angry left-wing political activist,” which catalyzed an onslaught of hateful messages from Carlson’s viewers, according to Dunn’s lawyer.

Two sources who spoke to the Daily Beast claim that former President Donald Trump has privately insulted Capitol police officers, referring to them as “pussies” who are too weak for law enforcement. They say Trump insists the officers are pawns in a political plot led by his enemies, or they just despise him themselves.

Many Republican lawmakers have defended and downplayed the actions of Trump and the January 6 rioters, seemingly to help keep the former president free of legal accountability. Reportedly, Rep. Andrew Clyde (R-GA) outright refused to shake the hand of Capitol Officer Michael Fanone when the two met in an elevator last month.

Some are now arguing the insurrection was not armed, despite testimony from officers detailing encounters with weapons. The officers noted that many of the rioters were using baseball bats, pepper spray, and even stolen police shields in hand-to-hand combat.

Notably, one rioter, a former police officer named Thomas Robertson from Rocky Mount, Va, was recently ordered to stay in jail after purchasing about three dozen guns while out on conditional release. The judge noted that Robertson’s history and behavior following the riot pose a risk for future “acts of ideologically motivated violence.”

Robertson was initially charged with a misdemeanor related to trespassing for being present and pictured inside the Capitol building during the riot, but the charge was later upgraded to a felony. The owner of a tactical store near Robertson’s home reported to the FBI that he had 34 guns awaiting pickup, all found to be purchased while he was out on bail.

In the months since the attack, questions have emerged about which lawmakers knew the attack was possible or probable before it happened. Mounting evidence suggests the plot to overturn the election was known by some members of the GOP.

Rep. Jim Jordan (R-Ohio) told Spectrum News he spoke with former President Trump on January 6 but claimed he could not recall if it was before or after the events. “I don’t know if I spoke with him in the morning or not. I just don’t know,” Jordan said. These statements have raised suspicions that Jordan spoke with Trump before the riot and was aware of the impending danger.

Similarly, Rep. Mo Brooks (R-Ala.) told CNN he wore body armor to Trump’s January 6 rally after he received a warning days earlier that there might be “risks associated with the next few days.” Brooks added he slept on the floor of his office and did not return to his condo after receiving the tip, though it is unclear if he alerted anyone else of the forewarned danger.

Despite those admissions, Brooks also tried to downplay the dangers of the day, dismissing the investigation as an attempt to create “political propaganda.” Brooks is also being sued for his role in inciting the riot, as he instructed Trump supporters to “start taking down names and kicking ass” at the rally before the attack.

According to retired Lt. Gen. Russel Honoré, who led a review of the U.S. Capitol’s security, Trump’s White House was complicit in the events of the day. Honoré told MSNBC that his personal opinion is “the executive branch was complicit in the planning and the delayed response,” but clearly noted that his opinion did not reflect the review’s findings.