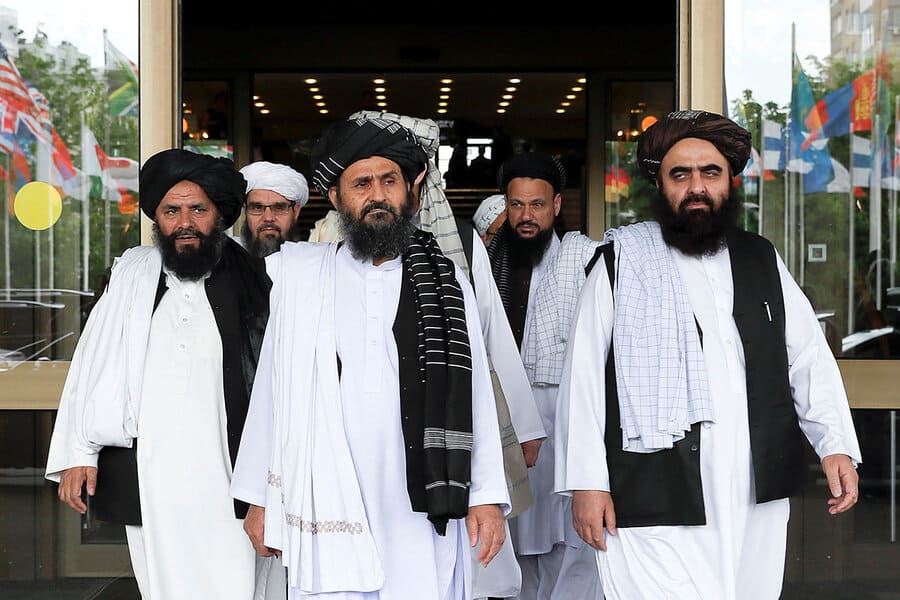 Two weeks before President Biden’s official end of the war in Afghanistan, the Taliban already swept through the country and took control of Kabul, the city’s capital.

The government of US-backed President Ashraf Ghani collapsed rapidly, culminating in the former president fleeing the country with cash-stuffed cars. After 20 years in the country, the United States leaves Afghanistan in tatters and in the hands of a militant group many people fear will repress its citizens.

The Taliban’s sweep through the country happened faster than even the most pessimistic public estimates from the US military. It happened so quickly that many governments seem to be caught off guard, scrambling to evacuate embassy workers and foreign nationals.

Images from the airport in Kabul went viral Monday, showing American military planes swarmed on the runway with people desperately climbing on as the plane is set to take off. Later US officials confirmed that body parts were found in the plane’s landing gear after the video showed two bodies dropping from the plane as it took off.

Most countries have closed and evacuated their embassies and diplomatic missions, and as the Taliban swept through the country and approached the capital, the airport turned into a chaotic scramble to leave the country. China, Russia, and Pakistan still have their embassies open in Kabul and hope to work with the new government to maintain peace.

Taliban spokesmen have been present in domestic and international media in a bid to reassure citizens and foreign governments.

In the group’s first official press conference after taking over the country, spokesman Zabihullah Mujahid said, “we are going to allow women to work and study. We have got frameworks, of course. Women are going to be very active in the society but within the framework of Islam.”

Despite the Taliban’s public statements, the situation in Afghanistan is still volatile, specifically around the airport in Kabul.

Some accounts have reported that day-to-day life is beginning to return to the nation’s capital, but the scramble of Afghan nationals and foreigners at the airport is still in flux.

The Dutch government’s first attempt to evacuate local embassy workers and their families failed due to chaos at the airport. The UK and Germany, among other countries, have had successful evacuation flights, but there has been difficult to secure the airport.

President Biden authorized 5,000 American troops to be sent to Kabul to secure the safe passage of embassy workers. However, crowds are still directly outside the airport attempting to leave the country.

Thousands of Afghans have also fled to neighboring Pakistan, including former prisoners of the Taliban.

President Biden set up a $500 million fund to help with unexpected refugee needs. Many people in Afghanistan are fearful of potential reprisals for working with American or other foreign security forces.

The fund may be part of Biden’s talks described several days earlier as a desperate attempt to find third countries to take Afghanis who temporarily helped the American military.

Overall, the mad dash out of Afghanistan is worst for Afghans citizens desperate to leave the country. The long 14-step Special Immigrant Visa (SIV) process has prevented many Afghans who helped the Americans during the 20-year war from securing safe passage out of the country.

The US State Department has not clarified exactly how many people are eligible for relocation, although it has said thousands more than the 18,000 currently seeking an SIV are eligible.

Julie Kornfeld, a senior staff attorney at the International Refugee Assistance Project, told Mother Jones about the visa process, “there’s no organization, there’s no clarity. It seems like no one really knows what’s going on.”

If the process is not streamlined, observers say that many Afghans who aided the Americans will face death and imprisonment.

The Taliban promoses Peace for Afghans

Despite the mad dash out of Kabul, the Taliban is attempting to convince citizens and foreign governments that it intends to uphold law and order.

During its first press conference, Taliban spokesmen said the group was seeking peaceful relations with other countries.

The Trump administration struck a peace deal between the Afghan government and the Taliban in February 2020. However, the deal collapsed as the Taliban seized the opportunity to recapture the country as the American military began withdrawing.

Several countries, including China and Russia have adapted quickly and expressed interest in seeking peaceful negotiations with the new Taliban leadership.

China, Russia, and others in the neighboring region will be hoping to keep conflict to a minimum as further conflict could encourage separatist factions in neighboring countries.

But there is plenty of wariness surrounding the Taliban’s ascension to power. The Taliban strikes fear in many, a political organization and militia known for its harsh interpretation of Sharia law and regressive politics.

As the Taliban has swept through the country, it has seized American weapons and US military biometrics devices. These devices could aid the Taliban in identifying Afghanis who aided the coalition forces.