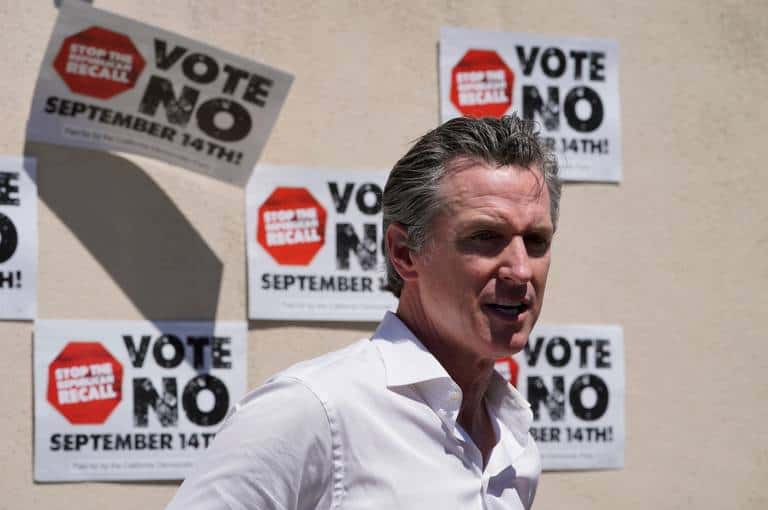 California Governor Gavin Newsom has faced a recall campaign that has come too close for comfort for Democrats desperate to keep the governorship. While early polls showed ‘remove and keep’ neck-and-neck, the most recent polling has the governor at a more comfortable 10-point lead.

The election is less than a week away as Californians will head to the polls to either keep or recall Newsom on September 14.

Not only is the Governor’s House in Sacramento up for grabs, but potentially the future of the U.S. Senate. The leading candidate to replace Newsom in case of a recall, Republican Larry Elder, would replace the aging Democratic Senator Dianne Feinstein with a Republican, tipping the Senate majority in the Republican’s favor.

The campaign to recall the governor began several years ago, but it gained steam throughout the coronavirus pandemic. Newsom faced staunch criticism from conservative Californians for public health measures put in place to prevent the spread of COVID-19.

The recall campaign has received more bad news in addition to poor polling numbers. One of the recall campaign leaders, Orrin Heatlie, revealed he is off the campaign trail after contracting COVID-19. Heatlie stated that he was unvaccinated against the virus.

Democrats Go All Out For Gavin Newson

After an initial lull in campaigning, Governor Newsom began taking the recall seriously after polling revealed he might be in for a shock.

Senators Elizabeth Warren and Amy Klobuchar have campaigned with Newsom in California. Vice President Kamala Harris is also set to return to her home state and join the governor on the campaign trail this week.

Newsom has tried to make the campaign of greater importance to Californians than just a campaign on his leadership.

“The consequences of California turning red, not blue are profound in terms of the agenda that the senator is advancing, [President Joe] Biden is advancing,” said Newsom.

Not only would the Senate majority potentially be in play if a Republican Governor wins the election, but California is also integral to President Biden’s infrastructure plans.

If Biden’s infrastructure bill passes, California will receive about $10 billion to improve the state’s public transportation systems. The biggest infrastructure project in the state, a rail project that would connect Los Angeles to the Bay Area with bullet trains, recently failed to receive additional funding from California’s legislature.

In addition to coronavirus and infrastructure, a big issue on the agenda is homelessness and housing. Newsom’s critics have used the ballooning number of unhoused people in the state as a wedge issue against the current governor.

In a recent poll, Californians said homelessness was the third most important issue facing the state, just after the economy and coronavirus response.

Human rights organizers have accused Newsom of using encampments as photo ops during the recall campaign.

While California has poured money into the issue to stem the tide, the state government has been unable to confront the dual crises of homelessness and exploding home prices across the state.

What the Recall Election Tells Us About State of American Politics

Newsom and his allies have attempted to paint the recall election a power grab by Trump allies unhappy with how the governor implemented coronavirus public health measures.

The fact that Newsom and his Democratic allies were caught off guard by this political coalition in a deep blue state shows that Democrats may be weaker against Trump-adjacent politics than they had hoped.

With the Texas abortion law as a recent example, Democrats can be particularly weak at the state level with dire consequences for its citizens. Furthermore, national-level politicians are often weak in the face of Republican governors with a fervent base.

Texas Governor Gregg Abbott and Florida Governor Ron DeSantis, and South Dakota Governor Kristi Noem have proved to be thorns in the side of curbing the spread of the Delta variant.

Thus far, President Biden and the Democratic Party have been unwilling or unable to fight against the overreaching power of these governors.

Newsom’s victory in the recall election is also not completely secure, with many Latinos, a key demographic in the state, sitting out of the recall election. With the specter of Donald Trump out of politics, for the time being, California Democrats are struggling to convince voters to turn out for the all-important recall election.

“I got my ballot, and I tossed it in the trash. I don’t feel I’d be fair,” Karla Ramirez, a California mother and cleaning business owner, told the New York Times. “I’m busy making sure my kids get back to school and get vaccinated.”