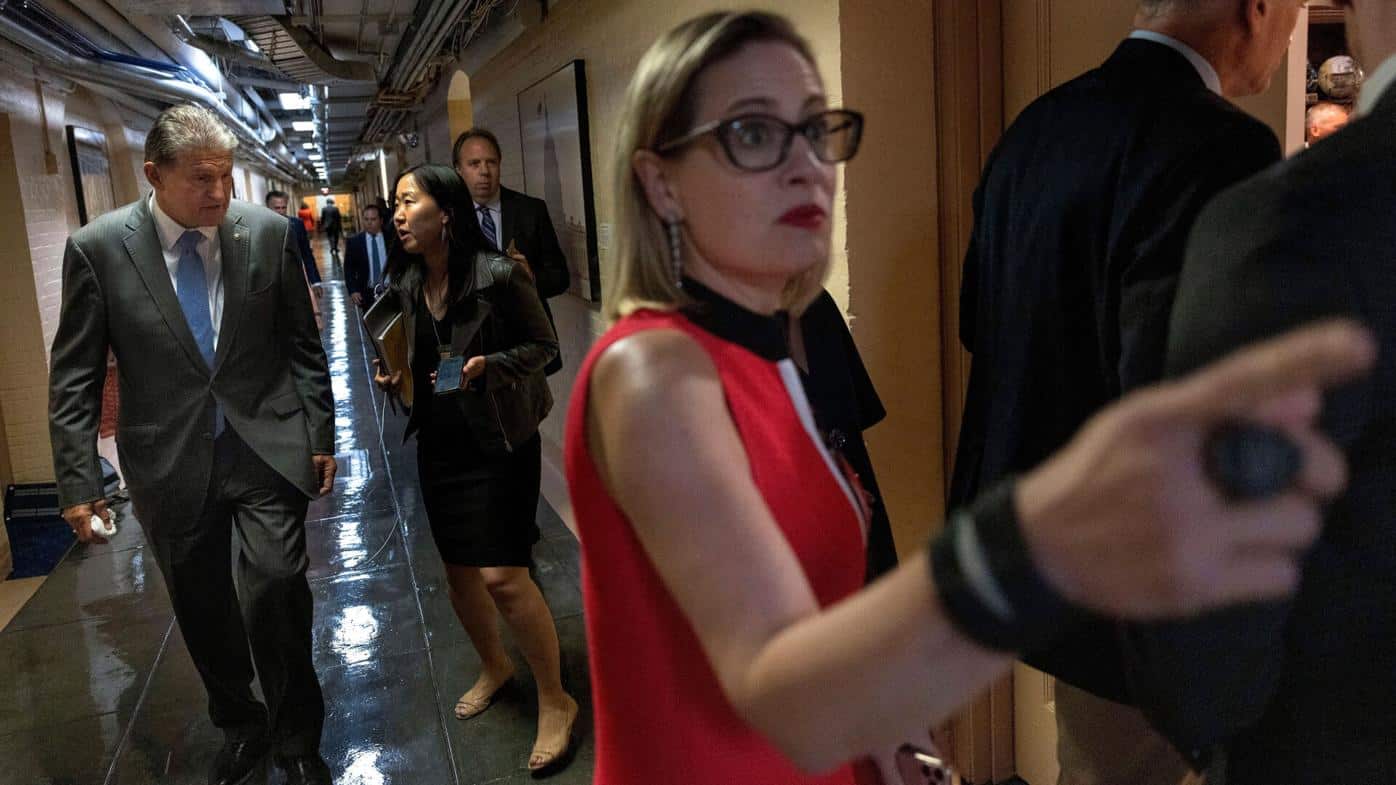 Final voting for President Joe Biden’s infrastructure bill approaches as the fate of the legislation is in the hands of two Democratic senators, with one who has yet to make their views on the bill clear.

In what seems to be a tantalizing game from Democratic Sens. Joe Manchin of West Virginia and Kyrsten Sinema of Arizona, their final decision seemed to be hanging on a string, taunting Biden’s Build Back Better agenda. As they continue to oppose the $3.5 trillion proposals, Manchin and Sinema have reluctantly kept their number for the budget bill to themselves as Manchin claims “fiscal insanity” and Sinema’s affluent pocketbook continues to grow.

What is the Build Back Better Agenda?

President Biden has proposed a $3.5 trillion bill for human infrastructure with a bipartisan $1 trillion stimulus package for infrastructure. The whopping trillions will help the American people under the Build Back Better Agenda and reduce emissions and energy costs.

The purpose of the bill is to “create jobs, cut taxes, and lower costs for working families – all paid for by making the tax code fairer and making the wealthiest and large corporations pay their fair share.” It will also expand health care access, increase educational and child care programs and fight climate change over the course of a decade.

The U.S. Senate currently comprises 50 Republicans, 48 Democrats, and two Independents who are in caucus with Democrats. At least 50 votes are needed to pass the bill. Therefore, a unanimous agreement from all 50 members of the Democratic caucus is needed, with Democratic Vice President Kamala Harris breaking the tie.

Republican leaders have rejected the bill overall, leaving the final decision to the Democrats. The opposition is no shock as the bill will be paid for by “increasing the corporate tax rate from 21% to 26.5% on businesses earning more than $5 million a year, and by raising the top rate on individuals from 37% to 39.6% for those earning more than $400,000 a year, or $450,000 for couples.”

Sinema and Manchin are expected to agree with this bill. The Democrats may likely lose the majority in the House and Senate if they fail to pass the bills.

Sinema has been the talk of corruption for some time now. Having been for Biden’s proposed bill not too long ago, many fear she has flipped sides. Her actions have garnered more concern than assurance while Sinema continues to attend fund-raisers with wealthy lobbying groups – a ‘legal’ form of bribery so long as Sinema adheres to their wishes.

Sinema’s interests are clouded while she actively takes money from corporations who expect her to strike this bill in return. Just last year, Sinema worked a paid winery internship, earning $1,117.40 in wages. Three Sticks, a winery in Sonoma, California, is owned by Bill Price, a founder of one of the country’s largest private equity firms.

Three Sticks held a fundraiser in August following her completion of the internship and ‘donated’ $6,800 to her campaign. Tickets to the fund-raiser cost $5,000 per guest, with many contributions going towards her campaign.

The New York Times reported on Tuesday that Sinema attended a fund-raiser with five business lobbying groups that oppose the bill, stating, “the influential National Association of Wholesaler-Distributors and the grocers’ PAC, along with lobbyists for roofers and electrical contractors and a small business group called the S-Corp political action committee, have invited association members to an undisclosed location on Tuesday afternoon for 45 minutes to write checks for between $1,000 and $5,800, payable to Sinema for Arizona.”

Sinema’s fund-raising attendance has been problematic for quite some time. In the past two years, she has received “tens of thousands of dollars” in donations from numerous private equity partners and investment firm CEOs.

It is backward thinking as Sinema stands in the way of government assistance for millions of American people but conveniently opens her checkbook when the money is for her.

Manchin has publicly said that he “cannot – and will not” support Biden’s agenda. In a statement released yesterday, Manchin claimed that the $3.5 trillion bill would be careless.

“What I have made clear to the President and Democratic leaders is that spending trillions more on new and expanded government programs, when we can’t even pay for the essential social programs, like Social Security and Medicare, is the definition of fiscal insanity,” Manchin said.

“Our tax code should be reformed to fix the flaws of the 2017 tax bill and ensure everyone pays their fair share but it should not weaken our global competitiveness or the ability of millions of small businesses to compete with the Amazons of the world.

“Overall, the amount we spend now must be balanced with what we need and can afford,” he continued, “not designed to reengineer the social and economic fabric of this nation or vengefully tax for the sake of wishful spending.”

Somehow, Manchin barely mentioned the bill’s elimination of carbon emission, rather focussing on the cost instead.

Ironically enough, Manchin, ‘America’s climate decider in chief,’ owns millions of dollars in coal stock. Enersystems, Inc., a company Manchin started in 1988, is now owned by his son, Joseph, to whom he gave the company before running for senator. Manchin has since invested in his former company and makes roughly half a million dollars a year in dividends from millions of dollars of coal company stock.

While Manchin has admitted that fossil fuel pollution is a contributing factor to rising global temperatures, he has also shown his opposition to legislation eliminating carbon emissions such as burning coal and natural gas. He has yet to budge on the shape of the bill, despite natural gas being the major contributor to global warming.

Manchin’s support was crucial to Biden’s goal of producing 80 percent of electricity from zero-carbon sources by 2030 and 100 percent clean electricity by 2035.

Now that Manchin is out of the running, it is up to Sinema to push the infrastructure bill into action. Biden may have expected the republican party to push back on his proposed bill, but he didn’t expect his own party to disagree. The government is now in crunch time as we await the final vote from Sinema.