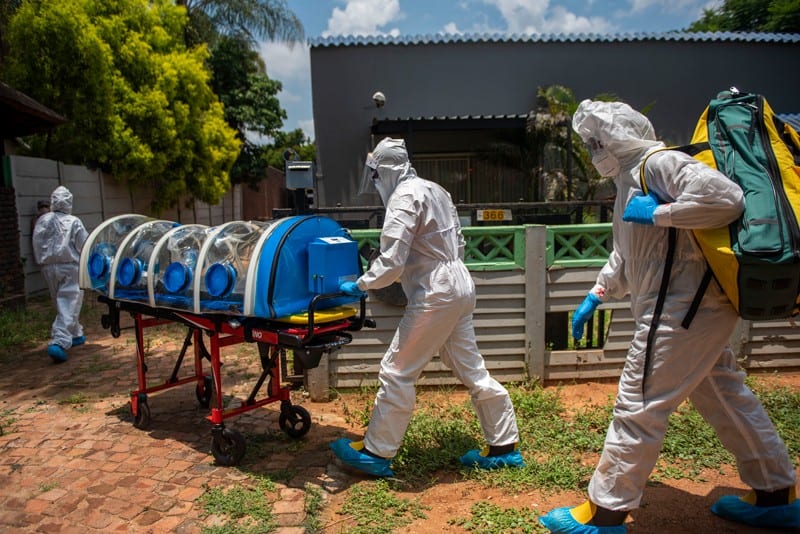 The world has tightened its borders and applied restrictions to flights and migration from much of southern Africa in response to the emergence of a new variant of the Coronavirus called Omicron Variant.

The variant has been profiled as being of interest and concern by the WHO; the same categorization applied to the Delta Variant earlier this year. A virologist at the University of Warwick described the Omicron variant as “the most heavily mutated version of the virus we have seen,”

It is not yet totally understood what the concrete risks are with the Omicron variant or whether the variant is more dangerous or deadly than existing coronavirus strains.

What does seem to be apparent is that the variant seems to be resistant to existing vaccinations and that those who have already been previously infected with COVID-19 would be more vulnerable to reinfection by Omicron.

The United States, Canada, Russia, Great Britain, and much of Europe have reinstated travel bans to visitors from South Africa as well as several other neighboring nations on the continent.

Ursula von der Leyen, EU Commission President, stated that travel restrictions would have to remain in place “until we have a clear understanding about the danger posed by this new variant, and travelers returning from this region should respect strict quarantine rules.”

The United States has applied travel restrictions to South Africa, Malawi, Botswana, Zimbabwe, and more. It appears that nations intend to hold them until more is understood about the Omicron variant.

The variant has already been detected in several other countries, with cases reported in Belgium, Botswana, Hong Kong, and Israel.

Some experts have pointed to the inequitable global distribution of vaccines as being partially to blame for the continuing emergence of hazardous variants, and critics point out that commitments to share doses have not been honored.

The three men who were caught on camera murdering Ahmaud Arbery have been found guilty after a 13 day trial in Georgia. The three Caucasian men had been caught on video shooting the African American Arbery at close range with a shotgun after running him down last year.

The individuals had been leveled with a variety of charges, including one count of malice murder, four counts of felony murder, several counts of aggravated assault, and more.

Similar to the recently concluded trial of Kyle Rittenhouse, the trial of Arbery’s killers has become emblematic of America’s extremely troubled relationship between its social justice system and racial equality.

The video of Arbery’s death began to circulate approximately two months after his killing. Prosecutor Linda Dunikoski summarized the altercation, stating “They made the decision to attack Ahmaud Arbery in their driveways because he was a Black man running down the street.”

The defense argued that the three men acted under reasonable suspicion that Arbery had burglarized a house under construction in the neighborhood and were performing a justified and lawful citizen’s arrest. They subsequently suggested that Travis McMichael, the man who actually shot and killed Arbery, was forced to act in self-defense when Arbery approached him by the truck.

However, their arguments were not enough to convince the jury of the trio’s innocence, even though the jurors were overwhelmingly white. Dunikoski pointed out that the arguments towards self-defense seemed dubious.

“They can’t claim self-defense under the law because they were the initial, unjustified aggressors, and they started this.”

Dunikoski went on to point out that “You can’t make a citizen’s arrest because someone’s running down the street and you have no idea what they did wrong.”

The 25-year-old Arbery was enrolled at a local technical college and was preparing to study to become an electrician.

President Joe Biden has approved the release of over 50 million barrels of oil to attempt to mitigate high energy prices ahead of the stresses presented by the travel-heavy holiday season.

The Department of Energy will release 50 million barrels of oil in what constitutes the largest release in the nation’s history.

Biden on Tuesday acknowledged that the act would “not solve the problem of high gas prices overnight.”

The goal of the release is to address the shortage of oil that is currently gripping the global community and was done in conjunction with several other nations in a concerted effort to address the issue.

Countries that participated in the release included China, India, Japan, South Korea, and the UK.

The President was apparently informed privately that the release would probably not amount to much relief towards the energy or inflation crisis. However, it remained an attractive option amongst few others in terms of its ability to offer short-term relief, especially considering that the administration is wary of increasing oil production after commitments made in the wake of the recent COP26 climate conferences.

Other actions have been taken to look into the roots of the crisis, including asking the Federal Trade Commission to investigate whether oil companies have been illegally pushing up gas prices.

Energy Secretary Jennifer Granholm recently offered insight into the possibility, stating “We Have 250 fewer oil rigs that are functioning today than we did before the pandemic…over 9,500 permits have been issued that are not being used. At the same time, the energy industry is making enormous profits. They’re back up to above where they were before the pandemic started.”

The recent blossoming in energy prices and steep increases in inflation has become increasingly strenuous political challenges to Biden in recent weeks.