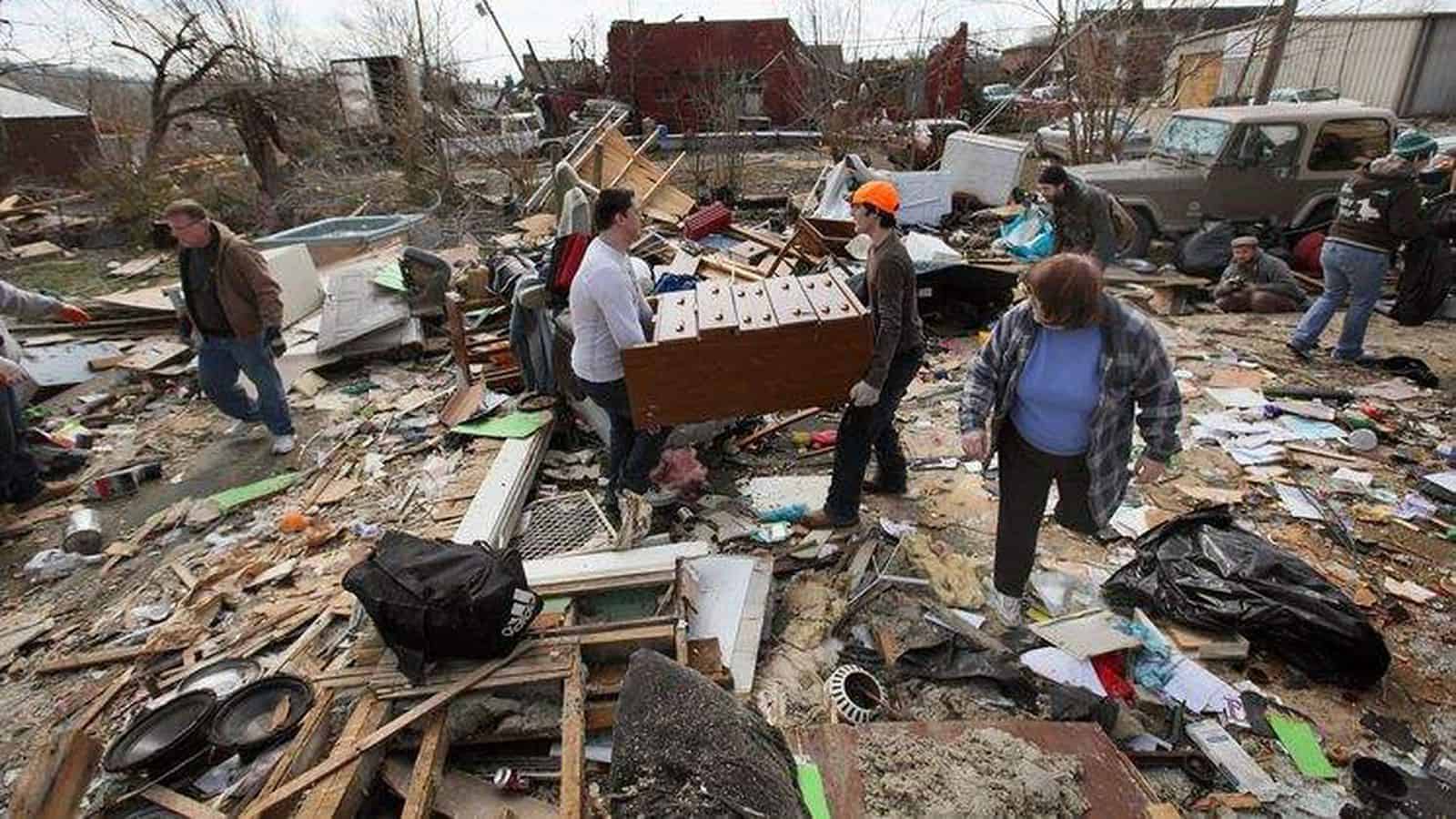 Record-breaking Tornadoes leave a trail of devastation across central U.S. states, killing more than 80 people, with many still missing. Reported deaths continue to mount as officials survey the damage caused by the deadly Tornadoes.

One of the twisters is suspected to be perhaps the longest-running single tornado in the countries history, with the deadly wind pattern tracking over 200 miles across multiple states.

Survivors in towns devastated by the tornados were left without basic amenities, including running water and heat, while temperatures dropped to freezing degrees.

Among the most devastating locations was the Kentucky town of Mayfield, where the raging tornado destroyed a local candle factory where over a hundred people were located. Only 40 of the members have been accounted for thus far.

The U.S. typically experiences hundreds, if not thousands, of tornado storms a year. The shock that has accompanied the devastation has been increased by the timing of the event. The time of year that typically produces the fiercest storms in the region is the spring, so having such a powerful weather system in December is extremely atypical.

President Joe Biden has declared a state of emergency in Kentucky and provided federal resources towards the recovery of the area’s hardest hit. When pressed towards whether he thought that Climate Change had contributed to the strength of the storm system, he replied:

“All I know is that the intensity of the weather across the board has some impact as a consequence of the warming of the planet. The specific impact on these specific storms, I can’t say at this point.”

He went on to make a request for the EPA to investigate whether they believed that the extreme weather event had anything to do with climate change.

Russia has placed a sizable military force near its border with Ukraine, perhaps indicating that it plans to attack its southern neighbor sometime in the near future.

The amassing of such a large military presence has provoked international concern, despite a lack of clarity surrounding whether the former soviet nation plans to instigate aggression of any sort.

U.S. President Joe Biden met with Russian President Vladimir Putin in a virtual meeting and pressed that any military provocation from Russia would be met with severe and immediate economic sanctions.

The physical presence of troops near the Ukrainian border has been duly met with an invasive digital information operation aiming to sow discord in the Ukrainian public.

The buildup of troops has been slowly increasing since this October, prompting the United States to demand some manner of explanation from Russia.

Russia had invaded Ukraine before when, in 2014, it annexed the Crimea region, an area of land which previously was held under the domain of the Soviet Union.

This annexation was followed by a proxy war in which over 14,000 combatants have been killed in battles between Russian-backed separatists and the Ukrainian military.

Since the invasion of Crimea, the U.S. has trained Ukrainian forces as well as provided billions in security funding.

The conflict over Ukraine between east and west is nothing new, with Putin lobbying criticism that NATO covets the territory as a foothold in their expansion east. The Russian President has claimed that the mass of troops at its border is defensive maneuvering.

Ukraine has expressed interest in becoming more ingrained in western institutions, including vying for NATO membership.

The Omicron Variant appears to have milder symptoms than several other of its more deadly cousins, as doctors in South Africa who have had more time to study the variant have reported.

The report comes when global anxiety over the latest variant is at its peak. Yet, despite the dread surrounding the ease at which Omicron appears to spread and its ability to infect those even the vaccinated, medical professionals observe that the variant does not deliver a more significant infection than previous strains of COVID-19.

It has been about two weeks since Omicron was first detected in South Africa. Since then, it has spread across the world, with cases detected in many parts of Europe, the U.S., and Asia.

The South Africa National Institute for Communicable Diseases has reported that just 30% of those hospitalized with COVID in recent weeks have been seriously ill, which represents a significant downgrade compared to the first outbreaks of previous strains experienced thus far.

“At the moment, virtually everything points toward it being a milder disease,” said Willem Hanekom. However, The director of the Africa Health Research institute added that “It’s early days, and we need to get the final data. Often hospitalizations and deaths happen later, and we are only two weeks into this wave.”

The much deadlier Delta strain of the coronavirus remains the dominant infector worldwide, with Omicron displaying prominence mostly in South Africa. In the Gauteng province of the country, which contains metropolitan areas Johannesburg and Pretoria, there was a 400% increase in new cases over the first week of December.

Evidence that Trump and his allies premeditated the events of the January 6 attack on the U.S. Capitol has continued to mount.

Mark Meadows, the former chief of staff in the Trump White House, recently turned into the J6 Committee a PowerPoint presentation that suggested that the former president attempt to declare a national security emergency to maintain executive power despite election results.

The presence of the document suggests that members of Trump’s cabinet and inner circle were aware of and collaborated with the events of the day, in which thousands of angry insurrectionists mounted an assault on the U.S. Capitol building under the guise that the 2020 presidential election results were somehow fraudulent.

The 38 page PowerPoint in question is titled “Election Fraud, Foreign Interference & Options for January 6”. It contains strategy tactics that the former President could pursue to cast doubt on the 2020 election results and promote conspiracies that would validate his continuing presidency.

The presentation stressed that Congressional leaders could be privy to outlines of possible foreign interference in the election, after which the President could declare a national emergency where he would cast into doubt the legitimacy of electronic voting.

The PowePoint also contained recommendations on how former vice-president Mike Pence could utilize his largely ceremonial role as the officiator of the inauguration to somehow subvert it, including delaying the certification of the presidential elections by recounting votes in a way that would skew towards Trump.

The House committee became privy to the existence of the PowerPoint after it was mentioned several times in the thousands of documents that Mr. Meadows turned over to the committee. It was reported that on January 4, the presentation was shown to several Republican senators and house members.

The committee has recommended Mr. Meadows for criminal prosecution for his defiance of a subpoena. Bennie Thompson, the committee chairman, said they would vote on whether to hold Meadows in contempt of congress sometime next week.