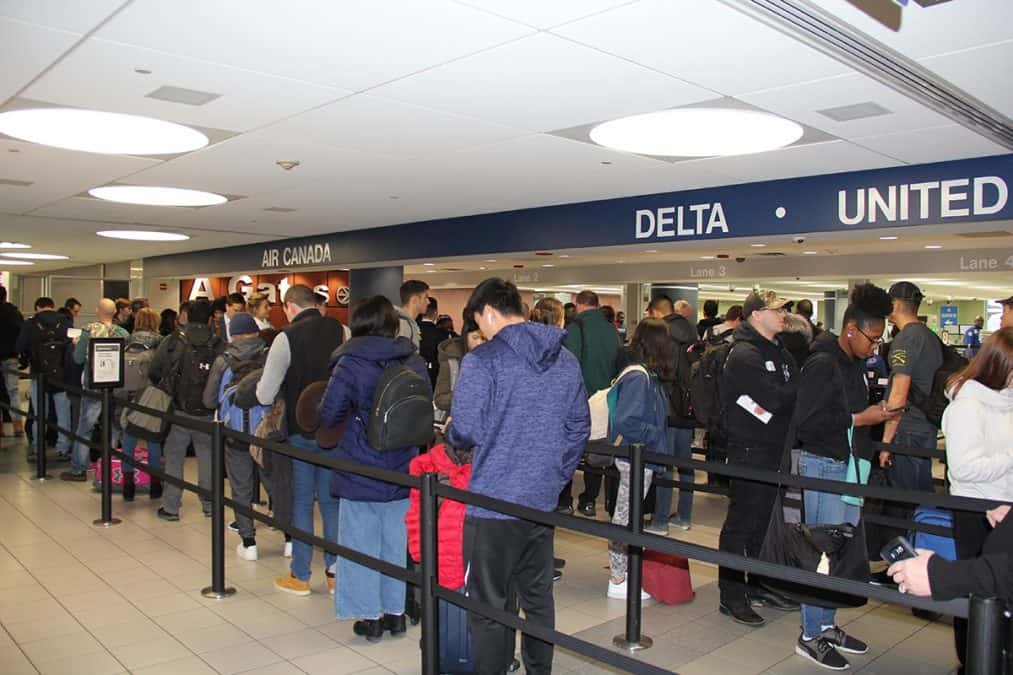 For the second year in a row, the globe experienced a holiday season severely impacted by COVID.

Thousands of flights were grounded due to staffing shortages across multiple major airlines, including Delta and United, leaving holiday travelers stranded at the airport, oftentimes with little to no forewarning.

The issue has created controversy within the industry, with Delta CEO placing a request for the Biden administration to shorten the number of days airline workers would have to quarantine before returning to work.

“Delta teams have exhausted all options and resources – including rerouting and substitutions of aircraft and crews to cover scheduled flying,” the company said in a statement.

The news adds insult to injury as the Omicron variant has rapidly spread across the country and the globe, becoming the dominant source of new infections worldwide.

More than 5,000 flights were canceled over the weekend. Additional traditions and services have been disrupted, with in-person church services canceled in major faith centers in New York, Washington DC, and Boston.

However, despite the rapid spread of Omicron, hospitalizations and deaths have remained lower than the previous surges of COVID numbers. Unfortunately, this has not applied to the over 50 million American citizens who remain unvaccinated, a situation that has health professionals worried.

This anxiety is compounded due to staffing shortages within hospitals, with many healthcare workers pulling overtime hours to compensate for colleagues who either have been barred from working due to vaccine mandates or are sick with the virus themselves.

The executive director at Eskenazi Health in Indianapolis, Graham Carlos, was quoted as such:

“A lot of people, including myself, had scheduled time off but are now being asked to come in and pick up shifts to cover for one another and meet the increased demands of patient care,”

This week, Senator Joe Manchin dealt a crippling blow to President Biden’s legislative agenda by refusing to support a key component of its framework – the massive Build Back Better bill.

The $1.9 trillion-dollar bill contained massive expenditures that would affect many arenas across daily existence, including substantial expansions to the social safety net.

Manchin’s yes vote for the bill was necessary for Congress to pass the legislation under a process called budget reconciliation, which means that it would require only 51 votes to pass.

The bill had already passed the Democrat-controlled House earlier this year in November. Along with fellow centrist Democrat Krysten Sinema, Manchin has consistently acted as a skeptic and roadblock towards the bill’s actualization.

Manchin’s chief concern with the legislation has been its effects on the national debt and its possible inflammation of the current inflation crisis.

The move has invited severe criticism from both moderates and progressives within the Democratic party. Independent Senator Bernie Sanders of Vermont said “I think he’s going to have a lot explaining to do the people of West Virginia.”

The independent Senator was one of a few who felt that the bill should be brought to a floor vote so that Manchin would be required to vote no on the record, jeopardizing himself in the eyes of his constituency.

“If he doesn’t have the courage to do the right thing for the working families of West Virginia and America, let him vote no in front of the whole world,” continued Sanders.

Despite the setback, President Biden continued to negotiate with Manchin over details of the legislation and seemed confident that a satisfactory compromise could be summoned.

“I still think there’s a possibility of getting Build Back Better done.”

On Christmas day, a highly sophisticated telescope with the world’s biggest-ever price tag of 10 billion was the latest piece of off-world technology launched into orbit.

The telescope, called James Webb after a prominent figure of NASA’s history, has been described by the science organization as a “time machine” due to its ability to probe into the deepest corners of space-time, catching glimpses of formative events from our universe’s past, including the big bang.

The purpose of the telescope lies in its aforementioned ability to study the deep past of the cosmos, in addition to scanning neighboring galaxies for earth-like planets that would be capable of supporting life.

The rocket was launched from an ESA (European Space Agency) station in French Guiana. After leaving Earth’s orbit, the telescope started its journey to its next destination: a point approximately 1 million miles away from the planet which birthed it.

The Webb telescope is intended to replace the infamous Hubble telescope, which has been in Orbit since 1990. The Webb telescope far surpasses its older cousin in terms of the technology it’s outfitted with, which includes a much larger mirror to gather light from distant stars.

In addition to the larger mirror, the new telescope can study light from the infrared spectrum of frequencies from the visible spectrum of light.

The telescope’s journey remains precarious; upon completing its five-month journey to its stationary point, dozens of technical operations will take effect to prepare the telescope to gather data, each one needing to execute flawlessly to ensure the success of the mission.

“It’s like nothing we’ve ever done before,” said NASA program director Greg Robinson.