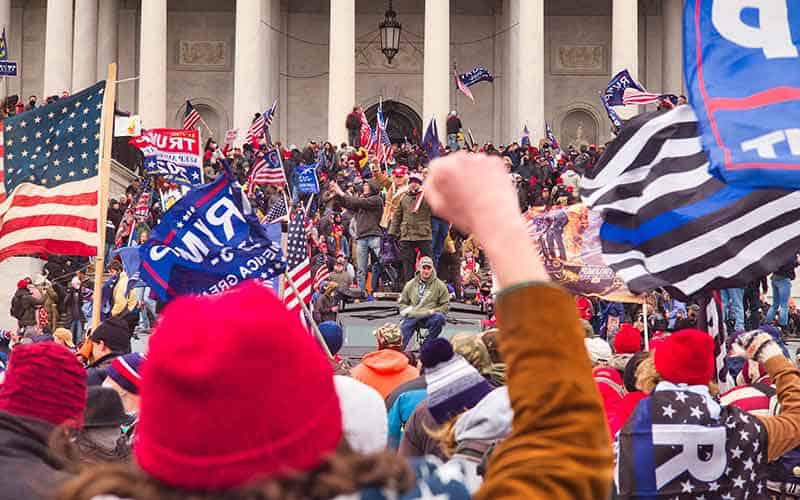 It has been one year since the January 6 Capitol riots when thousands of Trump Supporters stormed the U.S. Capitol, determined to overturn the presidential elections and delay the counting of electoral votes for Joe Biden after being urged on by former President Donald Trump’s false claims of election fraud.

Since then, an investigation has been impended against the former president’s administration. More than 700 people have been charged with federal crimes. But, not much has changed since the insurrections as the U.S. democracy continues to be threatened. So, where does America stand one year later?

The riots, which lasted more than seven hours, were a direct attack on democracy, with right-winged extremists exhausting divisiveness among democrats and republicans and claiming the definition of white supremacy. Hundreds of people were injured during the riots, including at least 140 police officers.

Five people died, including four protestors: Ashli Babbit was shot by a Capitol Police officer after breaking through a window of a barricaded door, two died from medical causes, and one died of a drug overdose before collapsing and being trampled on by other rioters. Brian Sicknick, a Capitol Police officer, was pepper-sprayed during the riot and suffered two strokes before dying the next day.

Of more than 10,000 rioters who stormed the Capitol, over 800 made it inside, relentlessly damaging and stealing government property and vandalizing and ransacking offices. In June 2021, U.S. federal prosecutors estimated $1.5 million in damages caused by pro-Trump rioters that included broken glass, windows and doors, damaged furniture and historical paintings, and defecation smeared through the Capitol walls and floors.

Several laptops belonging to Democratic Senator Jeff Merkley of Oregon and Speaker Nancy Pelosi were stolen, fearing a breach in cybersecurity that resulted in a temporary shutdown and reauthorization of SIPRNet serviced computers by the United States Army Social Operations Command.

The Charges and Investigation

The story of the January 6 riots seems to have not yet subsided. One of the largest investigations in American history has since launched with dozens of subpoenas issued by the U.S. House of Representatives bipartisan committee. As of late, more than 727 rioters, including members of far-right groups like Three Percenter, Oath Keepers, and the Proud Boys, have been charged. Of these, more than 600 are accused of breaking into the building. Those found guilty can face up to one year in prison and a misdemeanor fine of $100,000.

Additional charges of over a hundred individuals include theft, assault, attempted murder, and vandalism. 75 of them face charges of using a deadly or dangerous weapon or causing serious injury to an officer, and more than 40 are charged with conspiracy against the country.

At least 165 individuals have pleaded guilty in connection to the Capitol riots. The FBI has encouraged the help of the public to identify 350 more individuals whom they believe took part in last year’s swarming of the Capitol, a heinous event that is considered the most documented crime in U.S. history, according to Insider. According to ABC News, more than 70 rioters have since been sentenced after pleading guilty, with more than 30 receiving jail time.

But, the most significant investigation has been that of the former president and his administration. The House bipartisan committee has issued at least 50 subpoenas to White House and Department of Justice officials, including former Chief of Staff Mark Meadows and former DOJ official Jeffrey Clark. At least 19 subpoenas have been issued to former Trump administration officials, including former White House Deputy Chief of Staff Dan Scavino and former Trump 2020 campaign manager Bill Stepien. Former New York City Police Commissioner Bernard Kerik was also subpoenaed and has since handed over hundreds of documents to the House.

Trump has continuously requested that the Supreme Court block any demand of White House documents for the Capitol riots investigation to no avail. Trump’s knowledge of the riots and his lack of condemnation for the events as they unfolded is still under investigation.

Soon after the riots, a conspiracy claim from right-wing Trump-supporting groups like QAnon claimed that Antifa, a left-wing anti-fascist activist group, was responsible for the horrific outcome of the event. According to the American Survey Center poll, the conspiracy theory quickly went viral, with 50 percent of Republicans and 28 percent of independents believing that Antifa was responsible for the attacks.

CNN’s Donnie O’Sullivan recently spoke with Trump supporters who denied the responsibility of the January 6 insurrection. One claimed that a republican would never act the way the rioters did. Another claimed the story was a giant hoax, despite hundred of video footage of that day.

“We are very peaceful people, so it was a total setup. To me, it was the FBI had set it up,” said Trump supporter Marge Mathieu. “I don’t believe that they were Trump supporters that did that.”

As the numerous investigations and conspiracy theories unfold, so has the reality of a divisive America. Unfortunately, the country is divided now more than ever before, and there is little sight to a unanimous understanding of our historical events.