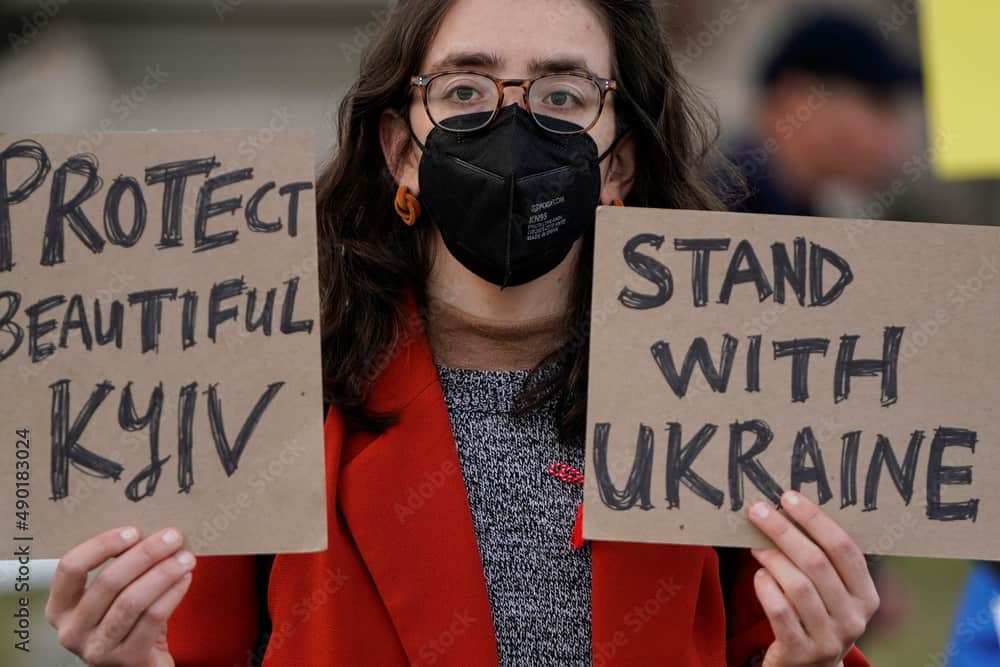 The Russian invasion of Ukraine continues as the world scrambles to respond to the most significant military action in Europe since WWII.

Fierce fighting has been reported across many Ukrainian major cities, including its capital Kyiv.

The invasion was initiated last Thursday in a move described by Russian President Vladimir Putin as a “special military action” coming after weeks of speculations, negotiations, and denials.

The ongoing invasion has been met primarily with outrage and disbelief from the international community towards the decision, with several pointing to the invasion’s potential to completely alter the geopolitical landscape established in the late 20th century following the dissolution of the Soviet Union.

Open Warfare On The Streets Of Kiev

The primary objective thus far of the Russian military has been the occupation of the Ukrainian capital Kyiv, where Russian and Ukrainian forces have engaged in open combat in the streets since Friday.

President Zelensky of Ukraine enacted general mobilization for any male from the age of 18 to 60, encouraging citizens to defend the city by taking up arms.

The Western powers have begun to engage in a proxy war by supplying Ukraine with arms and delivering punishing economic sanctions to Russia.

The countries supplying Ukraine with arms reinforcements have included Germany in a stark break from its typical post-WWII modus operandi.

Russia’s status as one of the world’s nuclear powers has added an extra dimension to the conflict as it develops.

Putin has placed the Russian nuclear deterrence forces on high alert, a maneuver that has dramatically escalated international anxieties surrounding events as they unfold.

Ukraine is also home to several Nuclear reactors, including the defunct Chernobyl Power Plant, a meltdown site that depends on constant maintenance to be kept from endangering the entire European continent from nuclear fallout.

The announcement has left many questioning whether the move illustrates a sincere commitment from Putin to utilize Russia’s enormous nuclear arsenal, that most prominent in the world, or if it amounts to saber-rattling intended to deter the west from enacting more sanctions of various stripes on the increasingly isolated country.

The United States and Russia typically keep land and sea-based nuclear arsenals active and ready for response at all times, but it is atypical to ready air-based nuclear armaments.

The US described the introduction of nuclear threats to the country as “Totally unacceptable”, and insisted that it would continue to support Ukraine with both funds and arms.

“President Putin is continuing to escalate this war in a manner that is totally unacceptable, and we have to continue to condemn his actions in the strongest possible way,” said Linda Thomas-Greenfield, U.S. ambassador to the UN stated.

In response to the threat of nuclear situations escalating, the United Nations Security Council responded by voting a rare special session of the General Assembly, something it has only done 11 times since 1950.

President Zelensky of Ukraine has authorized to reinitiate negotiations regarding the crisis as of Sunday evening, stating that “We agreed that the Ukrainian delegation would meet with the Russian delegation without preconditions on the Ukrainian-Belarusian border, near the Pripyat River,”

This announcement came on the heels of a statement from the Russian delegation that it had come to Belarus to engage in diplomatic discussions. Belarus has acted as an accomplice and ally for the Russian Federation in the invasion thus far.

President Aleksandr Lukashenko of Belarus spoken with Zelensky on the phone recently and has reportedly “taken responsibility for ensuring that all planes, helicopters, and missiles stationed on Belarusian territory remain on the ground during the Ukrainian delegation’s travel, talk and return,”

President Zelensky had previously refused an offer to hold talks in Belarus because Russia had staged part of its invasion from Belarus.

The possibility of negotiations is a welcome one to much of the world, which has generally responded to the rapidly escalating conflict with shock and horror, and as a deep setback to the diplomatic progress obtained in the 20th century.

“We all want negotiations to take place,” said French ambassador to the UN Nicolas de Riviere.

“The Crisis is very deep, and we need to provide support to Ukraine.”