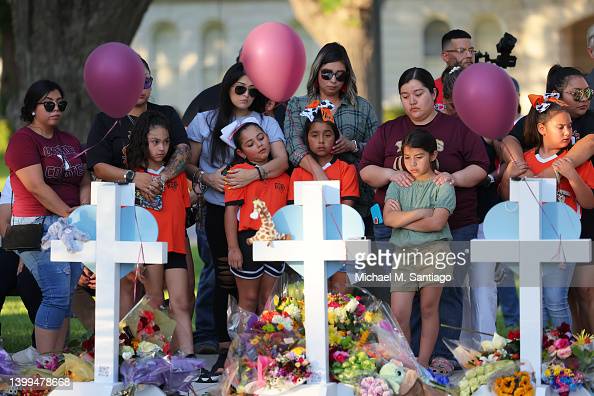 UVALDE, TEXAS - MAY 26: People visit memorials for victims of Tuesday's mass shooting at a Texas elementary school, in City of Uvalde Town Square on May 26, 2022 in Uvalde, Texas. Nineteen children and two adults were killed at Robb Elementary School after a man entered the school through an unlocked door and barricaded himself in a classroom where the victims were located. (Photo by Michael M. Santiago/Getty Images)

In the month since the shooting that left 21 dead in Uvalde, Texas – consistent and reliable information relating to the event has been anything but straightforward.

The initial police report came under scrutiny only days after the shooting. First reports of the event were quickly confused by shifting timelines, lack of police response, and conflicting statements.

The event began when the gunman’s grandmother made a call to Uvalde Police at 11:20 a.m., reporting she had just been shot in the face by her grandson. By then, the 18-year-old shooter had fled in his truck, crashed into a ditch near the school at 11:28 a.m, then allegedly fired at two passersby before entering the school.

Originally, officials from the Texas Department of Public Safety reported the gunman was confronted by a school district police officer before entering the school through a propped back door. Uvalde Police arrived at the school within four minutes but retreated after shots were fired and negotiations failed. It was an hour before the gunman was killed, a delay due in part to police waiting for body armor and other safety equipment.

Within days of the shooting, conflicting information emerged regarding the hour-long standoff and police inaction. Reports revealed there was no initial school police officer who confronted the gunman but instead an officer who passed the gunman in the school parking lot.

The teacher responsible for propping open the door announced publicly that she closed the door upon witnessing the truck crash and the driver with a rifle. Video recordings confirmed this statement, though the gunman was still able to enter the building due to the door failing to lock automatically.

A Lack of Updates from Uvalde Police

A month after the shooting, Uvalde police have ceased responding to the media amid constant adaptations to the timeline of events.

The school district has similarly remained mum, providing no further insight than what was shared in the first few days. In a statement on June 1, the Uvalde Consolidated Independent School District said they will “reserve comment until all state and federal agencies have completed their review.”

At a school board meeting on June 20, Uvalde residents called for the dismissal of Uvalde school district police chief Pete Arredondo, believing Arredondo to be the individual in charge of police response on the day of the shooting. The next day Arrendondo’s request for a leave of absence was denied by the city council, then on June 22, he was placed on administrative leave by the school district amidst a lack of reliable details regarding the investigation.

At the Uvalde city council meeting on June 21, Mayor Don McLaughlin shared his frustration. “It pisses me off that I can’t give you answers or can’t get you answers. I don’t owe allegiance to anybody,” he said. He noted that the number of law enforcement agencies involved and the conflicting information coming from multiple sources “continues to create chaos in our community and keeps the whole truth from coming out and being transparent.”

Sixty law enforcement officers from a variety of organizations such as Border Patrol and Immigration, Customs Enforcement, Uvalde Police Department, Texas Rangers, County Constables, and Texas State Police were all on the scene on May 24, making it difficult for investigators to pinpoint the individuals issuing commands that morning.

DPS Director Steve McCraw stated that Arredondo was responsible for the decision to wait more than an hour to take notable action. McCraw has been critical of Arredondo’s delay in entering the building and engaging with the shooter, calling it the “wrong decision” and an “abject failure.”

Arredondo responded, stating he was only acting as a first responder during the shooting. He reported that he never instructed police to remain outside of the building as he called for assistance and tools.

McLaughlin was overwhelmed with comments and questions during recent city council meetings but made clear that official information should be coming only from four public agencies. He directed the public to ask their district attorney and other officials to pursue information and block images of the deceased children from being shared publicly.

McLaughlin invited the Department of Justice to investigate the circumstances around the shooting. “I want the truth and these families deserve the truth, and we need to be transparent about what happened that day.’

Complications go beyond the failures of on-scene communications. Blunders also include a police radio system unable to function in the school, misplaced keys and lack of police protective safety equipment on the scene.

As investigations continue, journalists are working to uncover the truth behind the inconsistencies in official reports.

A New York Times investigation revealed that a dozen of the classroom’s 33 children and three teachers were alive as officers from eight different law enforcement agencies assembled outside. They contend  several of these victims could have been saved if they had received treatment during that hour-long delay before police entered the building.

Journalists from the San Antonio Express-News and Texas Tribune attempted to interview Arredondo on June 1 and 2, and were threatened with arrest. Journalists have also been harassed by groups of bikers while attempting to cover funerals of the victims and share the perspective of their loss.

Public records have been blocked by Uvalde city officials using a “dead suspect loophole,” a legal exception that excuses officials from providing records for a crime in which no one is yet convicted.The Supreme Court has ruled in prior cases that government agents, such as a publicly-funded police force, are not liable for a failure to protect against the loss of life by private citizens. At this moment it does not appear likely any police officers will be held accountable for deaths of the Uvalde shooting victims.