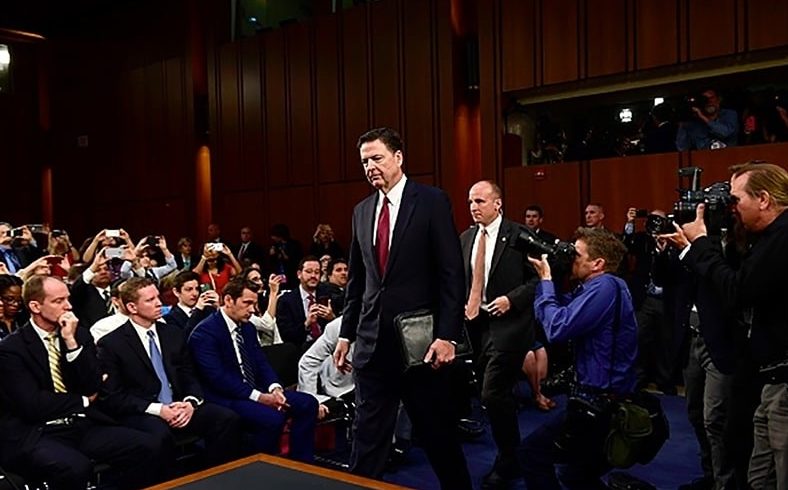 At long last, former Director of the Federal Bureau of Investigations James Comey testified today in front of the Senate Intelligence Committee.

Comey wasted little time in accusing Trump of spreading lies about him, and importantly false statements that scrutinized and questioned the integrity of the FBI. This may have been the former FBI Director’s most impassioned moment.

Comey documented every interaction he had with the president, saying, “The nature of the person — I was honestly concerned he might lie about the nature of our meeting so I thought it important to document.” The former FBI director revealed that he gave memos documenting his interactions with the president to Justice Department Special Counsel, Robert Mueller. This was information that was not previously known to the public and suggests that the special counsel may be looking into Trump’s firing of Comey.

Comey acknowledged leaking contents of those memos to a friend – Columbia professor Daniel C. Richman. According to Comey, his decision to release the content was based on Trump’s May 12th tweet, which stated, “James Comey better hope that there are no “tapes” of our conversations before he starts leaking to the press!”

The former FBI Director testified that he hoped the publication of information released in the memos would lead to the appointment of a special prosecutor.

The former FBI Director’s testimony comes after President Trump controversially fired him last month, which Comey apparently learned about from the news. In his testimony, Comey stated that “It confused me when I saw on television the president saying that he actually fired me because of the Russian investigation, and learned again from the media that he was telling privately other parties that my firing had relieved great pressure on the Russian investigation.”

However, when asked whether he believed the President was attempting to obstruct justice, Comey refrained from giving his opinion, indicating that this was the job of the special counsel.

While Comey’s testimony reflected poorly on the President, it may have further damaged Attorney General Jeff Sessions. Comey stated that he believed that Sessions would recuse himself from the Russia investigation before he actually did, saying, “We also were aware of facts that I can’t discuss in an open setting that would make his continued engagement in a Russia-related investigation problematic.” Comey also implied that Sessions was involved in his dismissal, which given Sessions’ recusal from the Russia investigation and Trump’s statement that Comey was fired because of that investigation, is problematic.

Comey also confirmed that Russia interfered in last year’s presidential election, stating, “The Russians interfered in our election during the 2016 cycle. They did it with purpose. They did it with sophistication. They did it with overwhelming technical efforts. It was an active, measured campaign driven from the top of that government. There is no fuzz on that.” Comey’s testimony on the President, Sessions, and Russia is likely to have long-lasting implications for the Trump Administration, as the Russia investigation continues.

A statement released by President Trump’s lawyer, Marc Kasowitz, stated that “the President feels completely vindicated and is eager to continue moving forward with his agenda with this public cloud removed.”