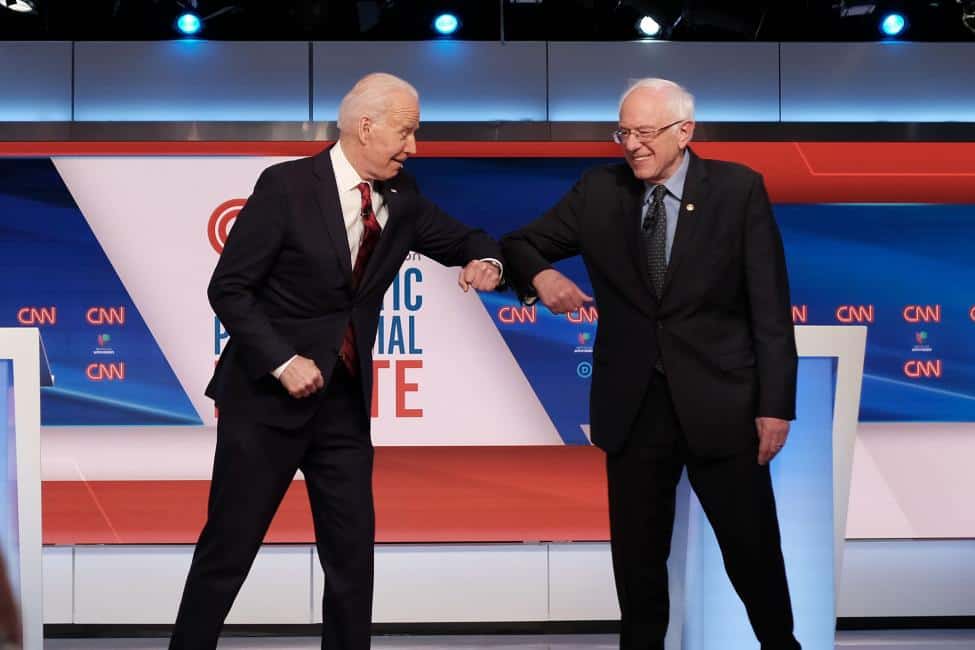 Democratic candidates Joe Biden and Bernie Sanders bump elbows before participating in a debate at a CNN studio in Washington, D.C. Because of the coronavirus, the debate was held without an audience and in accordance with CDC guidelines, their podiums six feet apart. Photo courtesy of CNN

At Sunday’s debate between the top Democratic Presidential contenders, former Vice President Joe Biden and Senator from Vermont Bernie Sanders, the novel coronavirus, COVID-19, took center stage. For the first time this primary season, the debate was conducted without an audience (a mostly welcome change). The CDC has recommended that gatherings over 50 be cancelled, as well as suggested other cautionary measures related to social distancing to help slow the spread of the virus.

The candidates, now down to only two after the largest and most diverse primary of the Democratic party, stood at the CDC-recommended six feet apart. Rather than shake hands or hug at the opening of the debate, as is customary, Biden and Sanders bumped elbows—part of a new “coronavirus etiquette” that has emerged in recent weeks.

The spread of the viral pandemic, which is leading to mass shut-downs and cancellations across the world, was top of mind Sunday night. Biden and Sanders were each asked how they would handle the pandemic as President, and what they are personally doing to stay healthy. Their answers revealed the primary difference between the two candidates.

The Reactionary vs. The Revolutionary

While both candidates agreed on criticisms of how the Trump administration has handled (or mishandled) COVID-19, the two men took the opportunity to point out their differences.

Sanders, who has long advocated for Medicare For All and a social revolution that would tackle income inequality, noted how the coronavirus had highlighted the need for a radical change in American social policy.

“This coronavirus pandemic exposes the inherent weakness in our healthcare system,” said the Senator. While he recognized that COVID-19 is certainly a crisis, he pointed out that last year “30,000 people died in America because they did not have insurance.” The crisis, he argued, is a deeper one than just the current coronavirus. The health and social impacts we are seeing from the novel virus are just symptoms of an already sick system.

Throughout the debate, Sanders positioned himself as the “I told you so” candidate—the one who had been right all along on issues ranging from healthcare to the Iraq War and gay marriage. With no obvious path to victory, barring a major upset, Sanders’ goal appeared to be to hold Biden accountable for his past and push the conversation towards left, much as he did in 2016.

The former Vice President, on the other hand, positioned himself as the strong leader in a crisis. He focused on the immediate crisis response that could be deployed “right now.”

“People are looking for results, not a revolution,” Biden said. “It has nothing to do with the legitimate concern of income inequality.”

Biden argued that countries like Italy have a single-payer healthcare system, and they still failed to adequately respond to the virus. He compared fighting the virus to being at war, saying it was like “being attacked from abroad.”

“This is like a war,” he said. “In a war, you do whatever you need to do to take care of your people.”

Last night, Biden announced his support of multiple positions formerly supported by those more to his left in an apparent attempt to court young, progressive voters. The policies include a bill that would make public colleges free for students of families with a total income less than $125,000 per year—a bill that Sanders himself wrote in 2017. Sanders has since called for public college to be free for all students, regardless of income.

His willingness to adopt the progressive plans of his rivals (current and former) demonstrates an attempt to consolidate the Democratic party around the prohibitive front-runner.

In an attempt to court Latino voters, with whom Sanders has been favored, Biden argued in favor of sweeping immigration reform. Biden also stated that in the first 100 days of his administration, no deportations would take place. After that, he announced, the only people deported would be those convicted of a felony inside the United States.

“Xenophobia is a disease,” he claimed.

Sanders, however, has argued that Biden has been too slow to adopt these progressive policies. He attacked Biden for his past arguments on the Senate floor in favor of cutting Social Security and his big-money donors. Biden denied he had made such arguments.

“What leadership is about,” said Sanders, “is going forward when it’s not popular, when it’s an idea you get criticized for.”

Tomorrow, Arizona, Florida, Illinois, and Ohio will hold their primaries. A total of 577 delegates are up for grabs between the four states. Joe Biden currently has 866 delegates, compared to Bernie Sanders’ 709. 1,991 delegates are needed for a candidate to secure the nomination.

With polling places often packed with large crowds and many voters touching the same voting machines, it is unclear how the coronavirus will impact voter turnout. Senior citizens, who normally have high rates of turnout and have been favoring Biden, may be worried about attending the public gathering and stay home. Young people, however, have been ignoring requests by health and government officials to increase social distancing.

Louisiana, which was scheduled to hold its primary on April 4, has already announced that it will be pushing it’s primary back to June 20 in an unprecedented move. It is unclear if other states will start to follow suit and what the larger impacts will be across the primary season.