Deaths On Niger Rivers in Nigeria 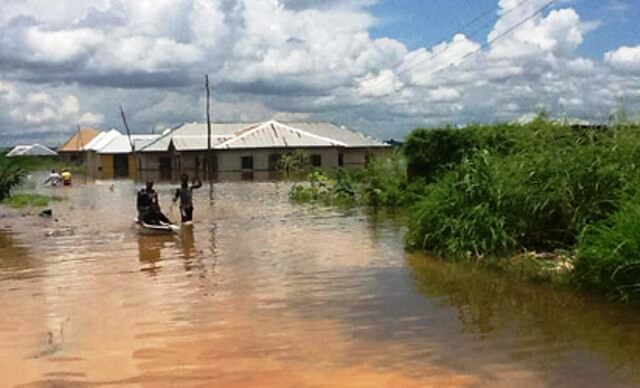 The rain has since ceased across Niger state and the hazy weather heralds the end of the season. And residents of the riverine communities displaced by the rampaging flood which always come with torrential rain, are returning to take stock as usual of their many losses.

But the water level has hardly reduced and still threatens lives. Just penultimate Saturday, it claimed seven lives, all female from the sleepy Balsa community in Katcha local government area of the Niger state. Among the dead were a pregnant homemaker and two little children. Four of the victims were teenagers between 4 and 11 years old.

They were heading to a farm across the river to thrash rice when the unfortunate accident happened. The owner of the farm, Yabagi, Alias Gomneti would endure the pain for life having also lost a daughter, a granddaughter, and a wife in the tragedy. The president of a human rights group, Global Movement Against Poverty (GMAP) Barrister Anthony Adaramola, who was in the state recently for a two-day workshop, described the incident as “shocking” and the figure “alarming”.

But such news is not new to the state and its people, especially as the rain intensifies. The figure from a similar accident early last month, precisely October 2, was higher when a boat capsized on River Kontagora, killing 11 out of its 17 passengers. The victims were all married women from Sabon Gari in Magama local government area. One of them was 7 months pregnant. And like the incident above, they were all going to a farm across the river to harvest groundnuts.

It is a recurring decimal and emergency officials will rush in to take statistics and do its report for onward submission to the higher authorities. But its figure will certainly not be complete until after a post-flood assessment of all the riparian communities across the state.

The official statistic put the death toll this year at 23, 19 of which were female. But these are just the reported cases; many believe the figure would be more. “People no longer report cases of death because of lack of response on the part of government,” a community leader told Caracal Reports in Munya, the headquarters of Munya local government.

Out of the 68 victims in 2012, 49 died when their houses were submerged during a downpour at night, while 19 perished as a result of boat mishaps. Caracal Reports learnt that flood related deaths became prominent in the state since 1998, when a total of 74 persons perished. Findings reveal that most of those affected are women, children, and the aged. Apart from the natural disasters, overloading by boat and canoe transporters causes some of the accidents.

Destructive rainstorms and the consequent flood have had adverse effect, especially in riparian communities where major rivers and their tributaries exist. Eight major rivers such as Niger, Kaduna, Gbako, Eko, Gurara, Ebba, Egga, Mariga, and their tributaries traverse the state. The State houses 3 major dams, Shiroro, Kainji and Jebba with the construction of the fourth already under way in Zungeru. All these factors put together have made the state prone to flood disasters of all kinds.

Apart from the annual precipitation, which is the increase both in intensity and duration globally, perennial discharges of excess water from the dams due to siltation have further complicated the situation. The flood comes with devastating consequences, submerging houses; destroying infrastructure, crops, and farmlands; depleting fisheries and contaminating water as graveyards, as well as other wastes are washed into the rivers. Local government areas mostly affected are Mokwa, Shiroro, Lapai, Borgu, Lavun, Katcha, Paikoro, Munya, Wushishi, Gurara, Bida, Magama, Bosso, Rafi, Edati, Gbako, Agaie, Agawara and Mashegu.

Over 400 communities across the aforementioned local government areas were affected this year, according to a rough estimate, while it displaced more than 200, 000 people, including women, children and the aged, the group regarded by emergency agencies as the most “vulnerable”. It is also said to have washed away 300,000.00 hectares of farmland and over 600,000 hectares of cultivated land. A multi-million sugarcane plantation and rice farm belonging to Sunti Farm, a subsidiary of Nigeria Flour Mills Plc, situated in Sunti, Mokwa Local Government area, was the first of such investments to be submerged. Other major agro-allied concerns were to suffer the same fate.

The statistics of houses and households, infrastructure, such as roads, drainages system, bridges, and other socio-economic impacts of the disasters were not available. The state emergency agency officials seem helpless because of the magnitude of the problem. Its activities are restricted to providing relief materials and conducting post-disasters assessment as well as pre-flooding enlightment.

Officials find it difficult to access flooded areas due to high water level and because of lack of basic working tools. There is no essential equipment like speedboats, ambulances even as life jackets are not handy. Governor Abubakar Sani Bello had to shelve an assessment visit to his deputy’s country home due to lack of effective transport means to convey him to the affected community.

Ketso, Ahmed Mohammed Ketso’s village was among the 60 communities in Mokwa local government area of Niger State along the plains of River Niger and its tributaries that were sacked by flood this year. Ketso’s residence was almost swallowed by the flood. The area made up of three wards will have been the first place the governor visited probably because of the influence of his deputy. But he had to terminate the journey at Guza community, where representatives briefed him.

He promised to return to the affected communities the next day with the Nigeria Air force helicopter but never did. At the Guza point he directed the commissioners for finance, works, and that of local government and chieftaincy affairs to “look for funds at all cost” to provide relief to the people of the affected communities. State Emergency Management Agency (NSEMA) through its director general Malam Ibrahim Ahmed Inga, said it has since provided relief and temporary camps to the displaced persons among other interventions.

But emergency experts said the anomaly requires a permanent solution in the form of resettlement upland in addition to social and economic mitigation of the affected persons. But such interventions according to state officials were beyond the state, especially since the activities of the various dams constructed by the federal government also contributed in no small measure to the problem through regular release of water into the rivers.

The Federal Government had resettled about 44,000 people in Borgu and Yawuri Emirates displaced by the construction of the Kainji Dam with an installation power generation capacity of 760MW. The affected people were resettled in New Bussa, Yelwa, Wawa, Nasarawa, Shagunu, Sabo Pegi and Monai, through what emergency experts referred to as a “forced evacuation”. The state and local authorities were said not to have been consulted in the resettlement, even as social groups in each of the affected communities remained excluded. The socio-economic impact assessment were also said not to have been carried out during the project design.

Then came the Jebba dam, which saw the merging of about 6,000 people from 42 communities into 21planned resettlement locations in the hinterland, known as Jebba villages. But the Shiroro dam initiative was the worst as most people displaced were hardly resettled before the project took off. The consequence of what experts said was a “misadventure”, is the death and destruction that have become a yearly ritual during the rainy season.

Worried by the recurring problem, the state government under the immediate past administration of Dr. Muazu Babangida Aliyu embarked on what is called an “all-inclusive” resettlement of all affected communities in the state through a two abode solution. The initiative seeks to proffer solution to the riparian communities whose cultural affiliation to their original place of abode, has for some time now hindered the resettlement drive of the state Government.

In this arrangement, the affected communities are to own two places of abode; a wet season home in their original place on the flood plain and a dry season home in the hinterland. In the dry season residents are allowed to move to the flood plain to enable them carry out their traditional economic activities which is fishing, while in the wet season when the water level rises, they can retreat to their homes in the hinterland where they engage in other agricultural activities. In this scheme the acquisition of resettlement sites are done through the traditional Emirate Councils of the host Communities, while the State Government provides site and services and issues a certificate of occupancy to the benefitting persons.

But the initiative remained at the drawing board even as the new government is yet to come to grasp with situation at hand. So as it were, the dam activities continue to exacerbate poverty instead of reducing it, as women and children commute in old and dilapidated canoes across the rivers as farm hands.

The suffering is compounded by the apparent lack of an agency like the Hydro Electricity Power Producing Area Development Commission, (HYPPADEC) to advance the cause of the people with its bill still before the National Assembly.

As many await the federal interventions, emergency experts canvassed for necessary measures to make movement across the many rivers in the state safer, through the purchase of boats for transporters on hire purchase. They also called for the training of local divers to be deployed at points considered to be dangerous during the rainy season for rescue operations, in addition to providing ambulances and life jackets for use by travelers. They also advocated for the strengthening of the NSEMA for utmost performance.