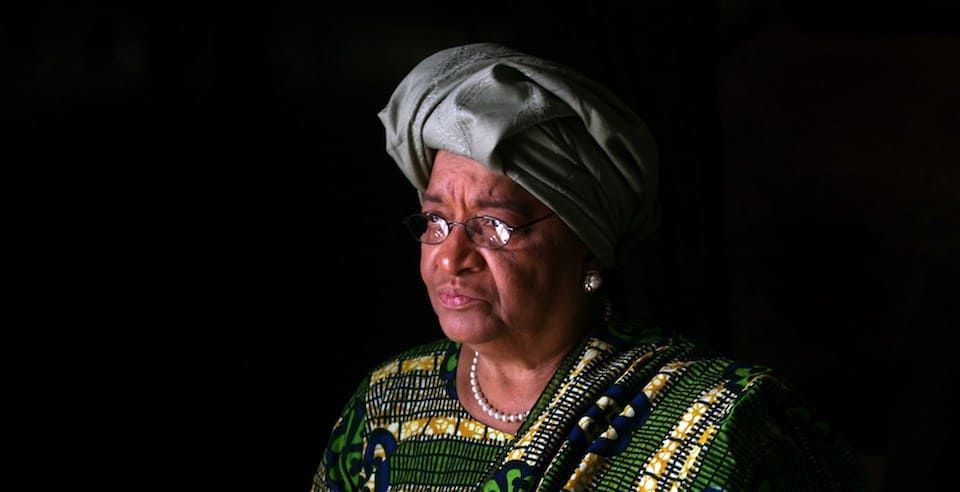 Ellen Johnson-Sirleaf, during her visit to the Hall of Remembrance at the Yad Vashem Holocaust museum in Jerusalem, 19 November 2007(Photo credit/MENAHEM KAHANA/AFP/Getty Images)

Sirleaf is also a previously renowned recipient of the 2011 Nobel Peace Prize, along with her Liberian compatriot Leymah Gbowee, and Tawakkul Karman of Yemen, for their struggle for women’s full participation the peace building movement.

In 2005, Sirleaf became Africa’s first elected woman president, and most recently stepped down after two terms as Liberia’s head of state.

“It is an honor to have been selected for the Ibrahim Prize for African Leadership. By choice, I have led a life of service and sacrifice on behalf of the Liberian people, and I will remain forever grateful to them for the privilege to serve,” Sirleaf said in a statement to AllAfrica.

Born to indigenous parents in Monrovia in 1938, her family had been fostered by Americo-Liberian families. Sirleaf’s maternal grandfather was German. She attended school in the capital, spending holidays in rural Bomi county with her maternal grandmother. She learned the local language Gola, and witnessed the divisiveness among the American-descended Liberians and the indigenous Liberians.

“As the first woman to receive the award, it is my hope that women and girls across Africa will be inspired to reach for their true potential, to navigate the challenges, break through barriers, and to pursue their dreams. Where there is a first, there comes a second, and a third, and a fourth,” she said.

At 17, Ellen Johnson married James “Doc” Sirleaf, and they had four children. She then went to the United States to study, earning an accounting degree and later received an MBA from Harvard in 1972.

Sirleaf received the Ibrahim Prize; an honor designed to encourage good governance. Prizes are usually awarded to former heads of democratically elected African government who turned over power in a constitutional process in the previous three calendar years. Sirleaf joins President Nelson Mandela as a recipient of the prestigious Ibrahim award. She is also the first woman recipient. Mandella received the award in 2007.

Inequalities continue to this day: Monrovia, the capital, has long been the epicenter of development, with running water systems, paved roadways, and a port that remains valuable to foreign companies. The interior of Liberia remains underdeveloped with very few paved roads, few schools, and widespread poverty.

Sirleaf was part of the Tolbert administration and with her financial expertise, served in Liberia’s government when tensions between the Americo-Liberian elitists and the majority destitute indigenous Liberians erupted. Sirleaf served on Indigenous staff sergeant Samuel Doe’s administration for six months as the president of the Liberian Bank for Development and Investment before fleeing to the United States. Doe also led a 1980 coup.

In the late 1980’s and early Sirleaf briefly supported Charles Taylor, raising money for his cause between 1989 to 1997 during a time when varying Liberian militias vied for power, unleashing terrible violence. Taylor an alleged warlord; now serves a sentence of life imprisonment for his participation in the blood diamond trade which fueled violence in neighboring Sierra Leone.

The United States acknowledged Taylor’s defeat of Sirleaf when she ran for the Liberian presidency in 1997, despite violence and irregularities. Two years later, civil war returned, disfiguring the country with sexual abuse, the use of child soldiers and abhorrent suffering until 2003. Women under the leadership of Leymah Gbowee then forced the warlords, after a meeting in Ghana, to engage in negotiations to end the war.

Sirleaf, during her tenure, was not free from controversial. She was more popular abroad than at home having won the presidency in the 2005 election, marginally squeaking into office in a run-off against George Weah, a soccer star who has just succeeded her as president.

Already earmarked with an exemplary international presence, she was positioned in high-level government posts at the United Nations, Citibank, and the World Bank. The posts highlighted Sirleaf’s excellence at bringing international development organizations to Liberia; focusing on women’s rights in attempts to end gender-based violence while building “capacity” and furthering reconciliation amongst former combatants — with help from agencies and NGOs ranging UNIFEM, UNHCR and UNMIL (the UN Mission in Liberia) to The Carter Center, Doctors Without Borders, CARE, The International Rescue Committee and Oxfam.

Organizations stepped in to aid Liberia in building the rule of law, social justice, and health. Global companies also invested: In 2011, the U.S. State Department noted over $16 billion in new foreign investment in Liberia since 2006.

Sirleaf exemplifies a certain era of what development stood for: calling for fiscal responsibility, economic investment and the promotion of good governance tied to the state, however, while international organizations saw in her a trusted collaborator, at home her vision of development and her ties to international capital made her suspect to many Liberians.

Allegedly, Sirleaf made deals with international corporations to buy or lease rights to exploit Liberian land officially in the public domain, but which indigenous groups had long claimed as their own, despite having no formal title. Reportedly, Sirleaf angered many when she ran for a second term in 2011 and won, even after The Liberian Truth and Reconciliation Commission advised that she not run for a second term because of her earlier support for warlord Taylor.

During her second term, she was embroiled in the 2014 Ebola crisis and ended outstandingly controversial quarantine of West Point, a destitute area of Monrovia, choosing instead to have Liberian public health officials emphasize social engagement and civic education – arriving to become the first of the three stricken countries in the region to end the Ebola outbreak.

When Sirleaf appointed her sons to crucial roles in the government, ethics advocates and Liberian critics voiced criticism for her for nepotism, which dismantled her administration’s campaign against corruption.

Sirleaf harped on good governance — and ushered Liberia through a peaceful transition of power. Sirleaf’s accomplishments, despite her misgivings, fulfill the requirements of the Mo Ibrahim prize.

For over a decade, she presided over peace in Liberia. She stepped aside at the end of her second term, as prescribed by the Liberian constitution, having heightened Liberia’s profile across the globe.

Admitting Sirleaf’s alleged ties to corruption, the prize committee acknowledged but continued: “Since 2006, Liberia was the only country out of 54 to improve in every category and sub-category of the Ibrahim Index of African Governance. This led Liberia to move up ten places in the Index’s overall ranking during this period.”

“I am thankful that the Mo Ibrahim Foundation, in granting me this honor, has sought to emphasize the consolidation of Liberia as a democratic state under my two terms in office. Indeed, my most proud accomplishment is that after 30 years of conflict, the power in Liberia now rests where it should – with the people, grounded in the rule of law, and in strong institutions,” Sirleaf stated.

In her closing statement, Sirleaf said, “The Mo Ibrahim Foundation continues to be a transformative force on the continent. They have changed the conversation about leadership. This is a discussion that I will continue to carry forward in my post-presidency years.”