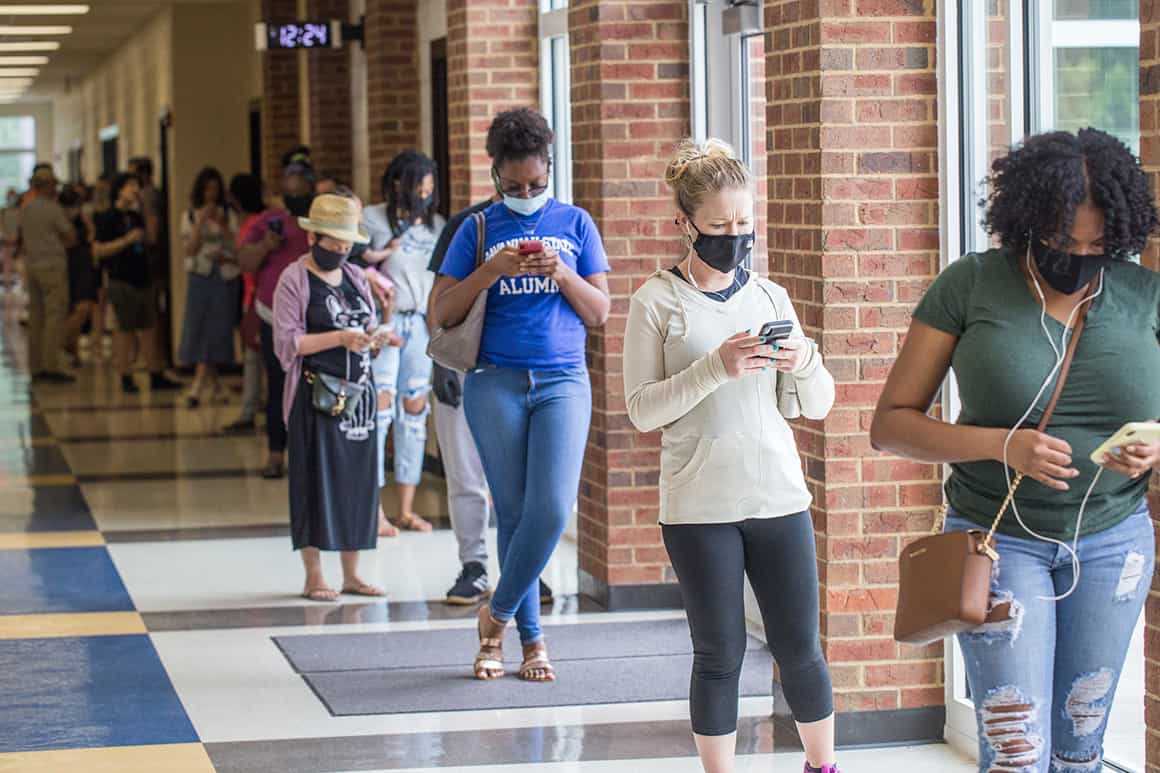 Fulton County, which is home to Atlanta and has a large black population, faced some of the worse delays. Voters reported technical problems with new voting machines, and many voters left lines after waiting as long as they could in the heat or pouring rain. Some polls stayed open hours late to attempt to accommodate voters. Voting rights advocates are concerned that the havoc spells doom for the November election in the contested state.

The state had postponed its primary twice from March 24 due to concerns over keeping voters and poll workers safe from the coronavirus. At the time, Georgia Secretary of State Brad Raffensperger stated, “This postponement allows us to provide additional protection and safety resources to county election officials, poll workers and voters.” The additional time did not appear to improve the situation in one of the worst-run primaries in the country this year.

Need for Mail-in Ballots Not Met by Existing Staff

Amid the COVID-19 pandemic, Georgia faced unprecedented demand for mail-in ballots. While, typically, only five percent of the states total ballots are absentee, the state lifted restrictions on absentee ballots this year, allowing all Georgians to vote by mail. Raffensperger sent absentee ballot applications to every registered voter in the state.

However, many primary voters reported never receiving the application or their mail-in ballot, forcing them to vote in person.

No extra funds were budgeted for hiring additional staff to process the influx of mail-in ballots. As a result, many mail-in votes were not counted by Tuesday.

Many primary voters who has wished to vote by mail were forced to turn up in-person at polling places on Tuesday. Polling locations, however, were operating at limited capacity. Most of the states poll workers are over the age of 70, a demographic most at risk of COVID-19. Polling centers were understaffed, under-trained, and under-prepared for the massive voter turnout.

High voter turnout seems to have been motivated by the recent Black Lives Matter protests in the wake of the police killing of George Floyd. Terrence Floyd, brother of George, has urged protesters to get out and vote in 2020.

“Let’s stop thinking that our voice don’t matter and vote — not just the president, vote for the preliminaries. Vote for everybody,” Terrence Floyd stated, “Don’t wait for somebody else to tell you who’s who; educate yourself and know who you’re voting for. And that’s how we’re going to hit them, because it’s a lot of us.”

The worst voter suppression on Tuesday appeared to be occurring in majority-black neighborhoods.

Additional problems arose since over 80 polling places have been closed since the pandemic began, resulting in some polling stations serving over 10,000 voters.

In November of 2019, the State of Georgia announced that they would be switching to a new voting system. The $104 million voting system by Dominion Voting Systems generates paper ballots from touch-screen entries. Although the state had ten months prepare the new system, at the time many critics argued that the job should take years, and that a rush installation would require shortcuts and put the election at risk. Those fears turned out to be founded.

Poll workers have reported technical errors with the machines, however, Raffensperger’s office denied these claims. The issues, he said, were a result of human error, a lack of experienced poll workers, and a “learning curve” associated with the new machines. These problems are likely to persist in November unless changes occur.

Raffensperger has also stated that while Fulton and DeKalb counties experienced difficulties, other counties in the state did just fine.

After the Supreme Court eliminated oversight from the Voting Rights Act in 2013, 214 polling places were closed in Georgia, representing eight percent of total polling stations. According to civil rights policy experts, these closures are mostly happening in poor, black communities.

Nationally, President Trump has been engaged in an active voter suppression campaign aimed at reducing voter turnout in 2020. In March, Trump claimed that Congressional plans to protect the election from the pandemic would hurt him. “They had levels of voting, that if you ever agreed to it you’d never have a Republican elected in this country again,” he said in an interview on “Fox & Friends.”
Voter suppression has long been a Republican electoral strategy. Those disenfranchised by long lines, closed polling places, purged voter registration rolls, and gerrymandering are often the poor, working-class, or people of color—traditional Democratic voters.