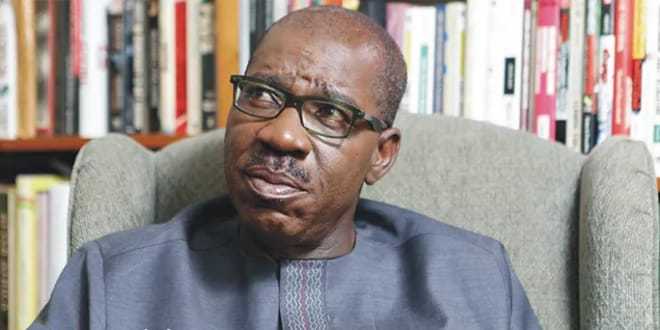 Gov. Godwin Obaseki of Edo has assured the people of the state of quick economic recovery in 2017 even as he announced the prohibition of the activities of private tax collectors in the state.

Obaseki gave the assurance in his new year broadcast on Sunday in Benin.

The governor, while felicitating with the people, said he would never betray the confidence reposed in him by electing him governor on Sept. 28, 2016.

“ I would like to use the occasion to express my profound gratitude and appreciation to you for overwhelmingly entrusting me with the responsibility to take charge and to steer the socio-economic and political destiny of our beloved state in the next four years.

“ I am aware of the enormity of the trust and confidence you have reposed in me and by the grace of God Almighty, I will meet your expectations,’’ he said.

Obaseki, who reviewed the socio-economic activities of 2016 and concluded that it was indeed harsh, however, exuded confidence that 2017 would be better for the people of the state.

“As we reflect on 2016, we have every reason to be thankful to God Almighty for preserving us and our country; 2016 was a year of challenges, difficulties, excitements and opportunities.

“Undoubtedly, the economic recession unleashed unprecedented difficulties on individuals, families and communities as no aspect of our economic and social life was spared the severe economic hardship.

“Because of the drop in the price of crude oil and the vandalism of pipelines; we saw the value of our currency decline significantly.

“We also saw industries and businesses shut down while people lost their jobs, the level of unemployment has continued to rise; all these have thus led to increase in crime and poverty in the land.

“In spite of the difficulties and gloom, 2016 nonetheless  experienced some bright moments for us in Edo state for which we are grateful to the Almighty,’’ Obaseki said.

He said Edo people remained the most fortunate in the out-gone year with the coronation of Oba Ewaure and his own election as governor of the state.

The governor noted that the two memorable events would be remembered for a long time in the annals of the state in particular and the nation in general in 2016.

“ By providence, we had the opportunity to show the world the rich tradition and culture of Edo civilization.

“These were displayed during the coronation of our most revered Royal Majesty Omo N’Oba N’Edo Uku Akpolokpolo, Oba Eware II, the 40th Oba of the Benin Kingdom.

“This generational display of splendor and culture fortuitously coincided with my victory and inauguration as the fifth   governor of Edo State,’’ he said.

The governor noted that “these challenges and changes in the outgoing year, therefore offer us an opportunity to create a society where we can utilize our historic, cultural and logistic advantages for economic prosperity and social stability.’’

He said his government would speedily put in place mechanisms, policies and programmes that would galvanize the economy of the state and make it haven for investments.

“As we therefore strengthen our democratic and other institutions, they will serve as a bastion to propel our economic revolution.

“The advantages which Edo State has in agriculture, the creativity and entrepreneurship of her people and its location and ability to attract industries and develop technical and vocational skills will in no time, pull us out of the current challenges.

“In 2017, we will continue to build on the successes achieved over the last eight years at a much faster pace.

“Our goal is to attract investments to and make Edo State one of the easiest places to locate businesses and industries in Nigeria.

“We have commenced actions to invest in and improve our technical and vocational schools so that we will train and produce highly qualified and employable people.

“The development of Gelegele as a port and industrial zone is of high priority to the Government and people of Edo State as it will improve the economic competitiveness of our state.

“I have therefore set up a seven- member high powered committee headed by Engineer Gregory Ero, to establish Gelegele  as a foremost economic and industrial hub in Nigeria,’’ he said.

Obaseki, who also assured investors and residents of the state of their continued safety and investments, announced the immediate prohibition of private tax collectors in the state.

“ I must quickly mention that one issue that continues to agitate Edo people is the lawless activities of some individuals who persist in harassing and extorting innocent citizens under the guise of collecting taxes and levies.

“The laws of our country vest the responsibility for collecting taxes exclusively on the three tiers of government, that is the federal, state and local governments.

“Consequently, with effect from today, Jan. 1, 2017, only employees of government can collect taxes and levies in Edo State.

“All arrangements to collect taxes or levies entered into by any state or local government agency in Edo state  cease to be valid with effect from today,’’ he said.

The governor appealed to the citizens not to heed to any form of intimidation from any quarters, and asked any harassed individuals  to “call or alert law enforcement agencies if they find anyone involved in such nefarious activities.’’

“We have unflinching faith and confidence that there is a bright light at the end on this dark phase, which by the grace of the Almighty will end soon.

“We are optimistic that with the current efforts of the Federal Government of Nigeria and with our efforts in Edo State, there will be sustainable opportunities which will create more jobs and provide greater opportunities for peace and prosperity for Edo State.’’

Obaseki, urged the people to remain steadfast and hopeful in the year 2017, he also encouraged tolerance.

“My good people of Edo State, as we usher in the New Year, let us always remember to share and show love to one another.

“Let us be tolerant and patriotic and to always remember the words of William Shakespeare, the great English poet and dramatist, who said  ‘none is happy except all are happy,’ he said.