QAnon Gaining A Foothold In US Politics 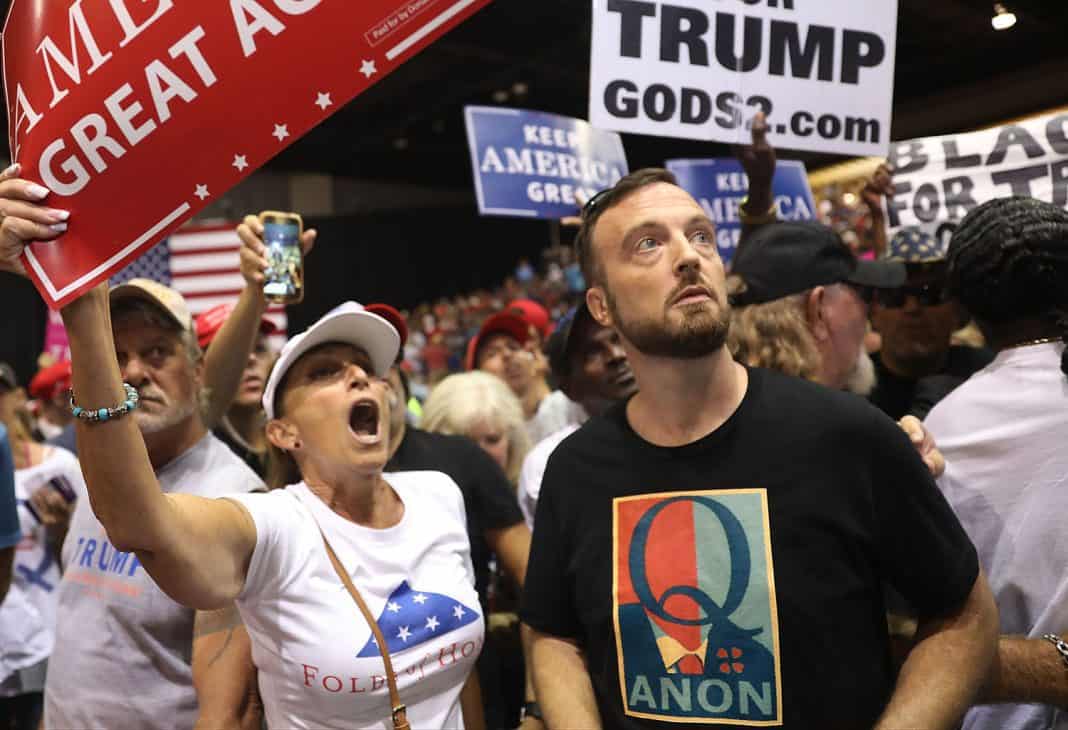 QAnon, from conspiracy theory into the heart of American Politics

As Lynette Coleman browsed through social media, she continued to see references to a video series called “Fall of Cabal,” which eventually piqued her interest. That’s how her association with the internet conspiracy theory known as QAnon began.

QAnon began in 2017 on internet forum 4Chan, with a user identifying as “Q Clearance Patriot,” posting a series of cryptic messages that hinted at the impending arrests of thousands of alleged sex-traffickers and members of a “deep state” involved in controlling the government. It was also alleged that this was tied to a secret operation by the U.S. President Donald Trump to clean up the government.

In 2020, the theory began to gain more steam and emerge in mainstream politics, with Republican U.S. Senate Jo Rae Perkin and U.S. House of Representatives candidate Majorie Taylor Greene endorsing the theory online. The movement also co-opted the phrase “save the children” — the trademarked name of a child welfare organization — to raise awareness about the alleged sex trafficking.

Coleman — an alias, as she didn’t want to be personally identified in this article — was one of the numerous posters in online groups dedicated to QAnon that identified “Fall of Cabal” as a motivating factor to look into the movement.  The video series is posted on YouTube under the username Fall Cabal, which bears a QAnon logo as it’s profile picture — it consists of ten videos, each titled by part.

As videos such as “Fall of Cabal” and other accessible posts online began to promote QAnon more heavily and politicians began endorsing the theory, it naturally brought in more followers. Squatchy Woodsman, also a poster in a QAnon group online, said once the theory became more “mainstream,” he decided it was worth looking into.

“Q started appearing in the mainstream more frequently, so I looked into it out of curiosity,” Woodsman said. “As far as the Q movement is concerned, it was simply the curiosity of seeing it pop up from time to time. My belief in a deep state trying to take down Trump started before his inauguration.”

Many components of the QAnon theory — such as the existence of a deep state, President Trump leading an operation to expose that group, and sex-trafficking in politics — have neither been proved true or false. The movement has espoused a belief in theories, such as the John Podesta-led “Pizzagate” theory and a 2017 prediction that Hillary Clinton would be arrested, which have primarily been proven untrue.

An internal FBI memo recently released to the press named QAnon as one of many “fringe conspiracy theories” that they believe could prove to be dangerous.

“The FBI assesses these conspiracy theories very likely will emerge, spread, and evolve in the modern information marketplace, occasionally driving both groups and individual extremists to carry out criminal or violent acts,” the memo said.

The movement has also begun to have social media groups and internet forums banned from sites due to a perceived notion of danger, with Reddit claiming certain communities or “subreddits” were inciting violence. These events — as well as the movement itself and the veracity of its claims — subsequently has been widely reported on in the media, by outlets such as The Washington Post, The New York Times, USA Today, and other prominent publications.

Politifact links six separate incidents of violence, potential violence, or criminal activity to known QAnon supporters, including the 2019 murder of a member of the Gambino crime family and the 2018 arrest of an armed Nevada man who drove an armored truck and blocked traffic on a bridge near the Hoover Dam, demanding the release of a government document and fleeing after a standoff with police.

Despite those isolated incidents and media reports, those inside the QAnon movement believe that these assessments are unfair and untrue. They claim they have experienced nothing but peace during their experiences inside the movement, and attempts to tie the movement to violence are gambits by the media to silence the movement.

One thing the mainstream media has made the Q movement out to be was that we are about violence and we are a “threat” which is not true at all,” Coleman said. “We are literally patriots who love our country and seek the truth, through doing our own research instead of believing everything the media tells us.

“Everything has been misinterpreted. Not one QAnon [follower] is violent or disrespectful. We are all truth seekers because the mainstream media does not tell one truth,” said another QAnon follower named Gina Marie. “We have been labeled as violent, and I have yet to see how one QAnon has been violent. All I see in our groups is questions and answers and people helping.”

Due to that perception, it appears that one of the current major driving forces behind the growth of QAnon and the movement’s ability to convert members is a distrust of U.S. media outlets, particularly prominent print and cable news publications. Coleman even suggested titling an article “The mainstream media has lied about what QAnon is about.”

Mainstream media is the enemy of the state. They show what they want and what fits their narrative,” said QAnon supporter Rick Veaks.

“It’s simple—media bias.  The mainstream media blatantly ignores facts and spins everything to fit their viewpoint. Censorship of conservatives on social media has also been a huge factor. Journalism has lost the confidence of the American people. It really has. I work in an industry that used to be strictly democrats, and now the overwhelming amount of Trump supporters is astounding,” Woodsman said.