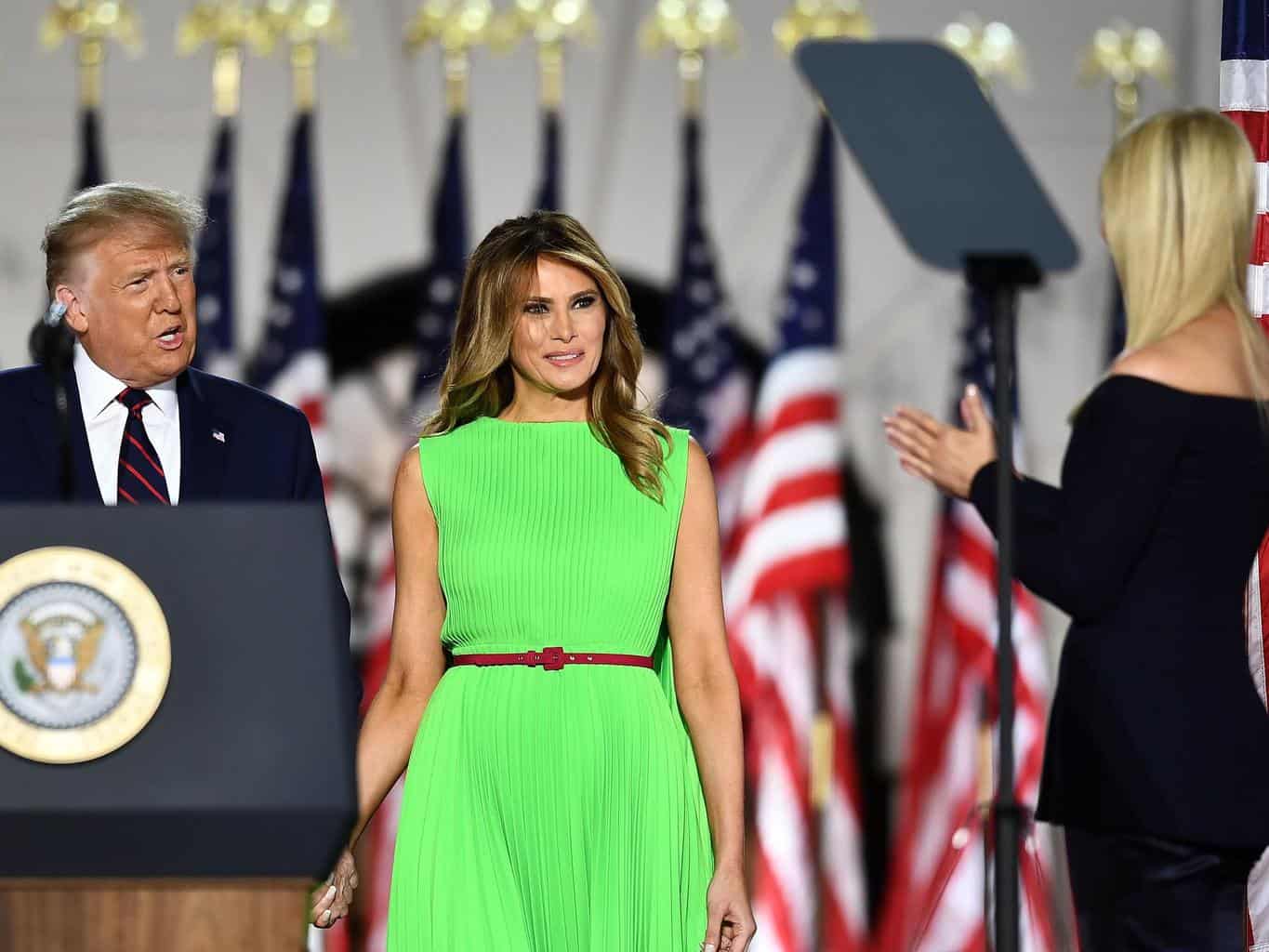 From Monday, August 24 to Thursday, August 27, several prominent Republicans banded together to urge Americans to re-elect President Donald Trump. With the 2020 Republican National Convention now complete, it’s time to take a look at some of the event’s most significant moments.

In one of the night’s more unexpected moments, Ohio congressman Jim Jordan told a personal anecdote highlighting President Trump’s empathy. Rep. Jordan’s speech began with attacking the Democratic Party but took a sharp turn when the congressman told the story of losing a nephew in a car accident.

He explained how Trump had reached out to the boy’s father for consolation, and told of the president’s empathy throughout the process. Of course, Joe Biden’s empathy is something that Democrats have been running on leading up to the election in November. Rep. Jordan’s time at the RNC seemed to have been a response to this, suggesting that Trump is the more empathetic of the two.

Turning Point USA founder Charlie Kirk took a vastly different approach to that of Rep. Jordan, however. Kirk’s time was almost entirely spent, suggesting that a Joe Biden victory would lead to anarchy. He was critical and unsympathetic towards the ongoing Black Lives Matter Protests, at one point saying: “The American way of life is being dismantled by a group of bitter, deceitful, vengeful activists.”

Finally, perhaps the most controversial speakers of the evening were Mark and Patricia McCloskey. The couple made headlines in late June after they were spotted on camera pointing guns at Black Lives Matter Protesters in front of their St. Louis home.

Despite each facing felony charges, the couple was given speaking time at the RNC, which they mostly utilized to vilify protesters and scare suburban families. “No matter where you live, your family will not be safe in the radical Democrat America,” warned Patricia McCloskey.

First lady, Melania Trump’s speech at night two of the RNC, acknowledged America’s ongoing struggle with COVID-19 and race relations, issues which were sidestepped mainly by some of the night’s fellow speakers.

“It is a harsh reality that we are not proud of parts of our history,” she said, before adding: “I also ask people to stop the violence and looting being done in the name of justice, and never make assumptions based on the color of a person’s skin.”

Later in the night, President Trump delivered his RNC acceptance speech on White House grounds. This may have violated the Hatch Act, which prohibits federal employees from engaging in political activity while on duty.

Despite this, Trump still utilized the White House in several segments throughout the evening, at one point holding a naturalization ceremony and announcing a presidential pardon.

President Trump’s second-eldest son, Eric Trump, was also given speaking time in night two of the RNC. He laid into the news media, which Eric Trump explains, “mocked” Trump’s supporters in 2016, and explained how President Trump is the candidate for America’s “silent majority.”

In another somewhat unexpected segment, Nicholas Sandmann discussed “cancel culture,” which he believed was being pushed by Democrats. Sandmann went viral in 2019 after an interaction with liberal activist Nathan Phillips seemed to divide the nation. In his speech, Sandmann discusses his experience with being “canceled,” himself.

“Canceled is what’s happening to people around this country who refuse to be silenced by far left,” Sandmann said. “Many are being fired, humiliated, or even threatened, and often the media is a willing participant.”

During night three of the RNC, the police shooting of Jacob Blake in Kenosha, Wisconsin, was downplayed mainly or ignored altogether. As the RNC aired, NBA playoff games, which were supposed to take place that evening, were canceled when players protested Blake’s shooting. Just hours before night three took place, a 17-year-old was charged after shooting and killing two protesters in Kenosha.

Despite this turmoil, speakers failed to acknowledge the situation in Kenosha until Vice President Mike Pence took the stage from Fort McHenry in Baltimore, Maryland. Pence’s speech offered little sympathy to protesters, instead highlighting the importance of a return-to-order in American cities.

“The violence must stop—whether in Minneapolis, Portland, or Kenosha. Too many heroes have died defending our freedoms to see Americans strike each other down. We will have law and order on the streets of America for every American for every race and creed and color,” said Vice President Pence.

Pence later attacked Joe Biden for acknowledging the message of protesters and implied that the violence would worsen under a Biden presidency.

“Joe Biden would double down on the very policies that are leading to unsafe streets and violence in America’s cities,” said Pence.

Press Secretary Kayleigh McEnany and Kellyanne Conway also delivered speeches this evening, each giving personal anecdotes in an attempt to counter claims of President Trump’s sexism. Conway cited Trump’s support when she decided to step away from the White House to focus on her family, calling Trump a “champion” of women.

“He confides in and consults us, respects our opinions, and insists that we are on equal footing with the men,” said Conway.

Mitch McConnell was one of the more prominent speakers in the top half of night four. The Senate Majority Leader unsurprisingly attacked Democrats and the “radical left” during his prerecorded speech, claiming that they would pass laws to “take away your Second Amendment rights” and limit “how many hamburgers you can eat.”

Senator McConnell also criticized Democrats for their stances on immigration and healthcare, claiming that Joe Biden wants “free healthcare for illegal immigrants” as one of his main policies.

Former New York Mayor Rudy Giuliani gave a speech later in the evening about crime and the ongoing protests in major American cities. Giuliani blamed the current Mayor of New York Bill de Blasio for the violence taking place in the city currently.

“Murders, shootings, and violent crime are increasing at percentages unheard of in the past. We’re seeing the return of rioting and looting,” said Giuliani.

Ironically, while New York’s violent crime is up in 2020 from 2019, it is still overwhelmingly lower today than when Giuliani was in office. NYPD statistics estimate that the rates of seven major felony offenses have actually dropped 290 percent since Giuliani was mayor.

The final speech of the 2020 RNC was from President Donald Trump himself, who spoke live at the White House lawn in front of over 1000 closely seated guests. While some have criticized Trump for this obvious violation of CDC guidelines, it was his spreading of misinformation throughout his speech that proved to be even more controversial.

The president once again condemned protestors and voiced his unconditional support for the police, which Trump claimed will be defunded by Joe Biden. Biden has said on numerous occasions that he does not support defunding police departments.

Trump also touched on the nation’s handling of COVID-19, telling viewers: “We developed, from scratch, the largest and most advanced testing system in the world.” He also claimed that the United States has among the lowest fatality rates in the world from the virus.

In reality, CDC director Dr. Robert Redfield admits that the United States has missed 90% of Coronavirus cases with its late and unsatisfactory testing efforts. Additionally, the fatality rate in the United States is far from the lowest in the world. According to Johns Hopkins University, only 10 countries have higher mortality rates per 100,000 people; over 100 countries have lower death rates.

President Trump later formally accepted his party’s nomination for president, telling viewers that he is “brimming with confidence” and proud of the progress America has made under his presidency.

Concluding the 2020 RNC was a firework show that erupted over the Lincoln Memorial and the Washington Monument, drowning out the sounds of the hundreds of protesters outside the White House as fireworks spelled out “Trump 2020” in the Washington D.C. sky.