Weekend Review: Amy Coney Barrett on the Road to Confirmation 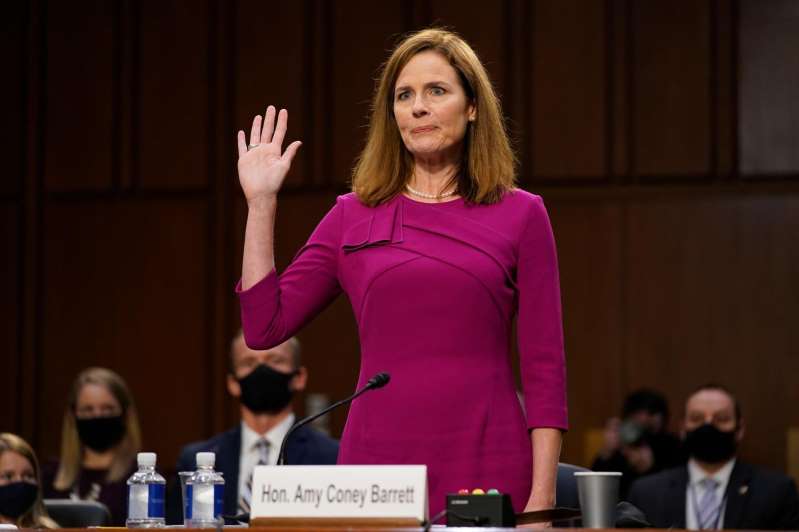 After days of testimony in front of a Senate Judiciary Committee, Republican’s praised Barrett while Democrats voiced concerns about the nominee’s political similarities to Pres. Donald Trump. During hours of examination, Barrett avoided questions about whether the right to buy and use contraception should be legally protected but explicitly denied having any “animus or agenda for the Affordable Care Act.”

Given Barrett’s known conservativism, the hearing brought few surprises until committee chairman Sen. Lindsey Graham thanked his “Democratic colleagues” specifically, and Sen. Dianne Feinstein returned the praise to him with a hug.

“This has been one of the best set of hearings that I’ve participated in,” Feinstein said. Calls for her to step down promptly followed that display.

A vote on Barrett’s confirmation is scheduled for Oct. 22.

On Thursday, Pres. Donald Trump and former Vice Pres. Joe Biden were each featured in town hall events on separate networks in lieu of appearing on a debate stage together.

Trump’s performance was notably characteristic. He refused to denounce QAnon, pivoting to Antifa and the “radical left” instead. The president also insolently called moderator Savannah Guthrie “so cute” for broaching the subject of his sympathy towards white supremacists.

When pressed on the effectiveness of wearing a mask during the town hall, Trump said he “was good with it” but added that he had “heard many different stories of masks.” The president contracted and quickly recovered from coronavirus because of rapid and aggressive medical intervention, but has often refused to wear a mask.

On the contrary, Biden said he would pressure state and local officials to mandate masks in public. He said “when a president doesn’t wear a mask or makes fun of folks like me (for wearing a mask),” it sends a message that “it musn’t be that important.”

But the former vice president used his time with an audience to do more than draw contrasts to Trump on pandemic response. He admitted to mistakes in the 1994 crime bill, which he is often criticized for pushing to pass as chairman of the Senate Judiciary Committee under Pres. Bill Clinton. It led to a significant increase in arrests of Black Americans for non-violent offenses.

The two have one more chance to square off before the election. The next presidential debate is scheduled for Oct. 22.

A history teacher was decapitated by a religious extremist in Paris on Friday as French President Emmanuel Macron works on a bill to address Islamic extremism.

The main suspect was killed by police soon after the murder, which took place near the school where the man worked. Nine other individuals were arrested in connection with the ghastly crime.

The teacher, identified as a 47-year-old man named Samuel Pady, was allegedly beheaded for showing a caricature of Muhammad, prophet of Islam, in a civics class. Witnesses say Pady gave Muslim students the option of leaving the classroom.

To Muslims, images of their prophet are considered religious blasphemy. A student told NBC News that he and others warned the teacher earlier this month that “it was not good to show photos like this and that it would cause a huge problem.” The student added that he did not foresee Pady’s unjustifiable death.

The suspected murderer was an 18-year-old Chechen refugee who had images of the crime on his phone. He had also reportedly sent text messages confessing and was seen at the school asking about the teacher before the murder.

Other members of his family, including his grandfather, parents, and younger brother, have also been arrested in relation to the attack, which police are investigating as an act of terrorism.

Protests over Prime Minister in Thailand

On Wednesday, thousands of pro-democracy protesters rallied in Bangkok, Thailand at the office of Prime Minister Prayuth Chan-ocha. The demonstrators, many of them students, marched for removal of the prime minister and overall reform of the country’s monarchy.

The government acted by declaring a state of emergency and riot police promptly began clearing the area. They reportedly arrested 20 individuals for refusing orders.

Earlier in the day, a motorcade carrying the royal family was confronted by tens of thousands of protesters. The king, who has consolidated massive wealth and power, was visiting Thailand from Germany where he lives most of the time.

Government spokesman Anucha Burapachaisri said charges were being pursued against “the protesters who obstructed the royal motorcade” and “those who had acted in a way that defames the monarchy.” Insulting the monarchy is a crime which can result in a 15-year prison sentence in Thailand.