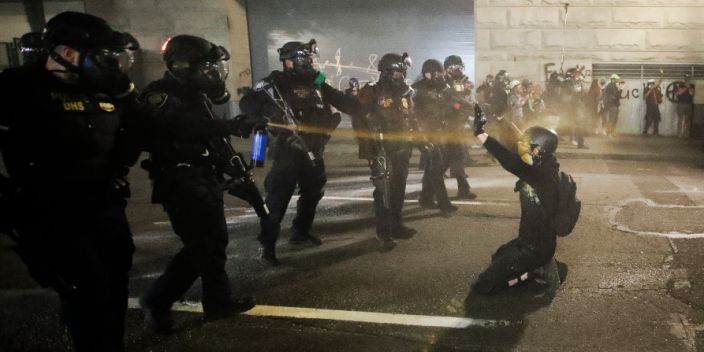 According to a report from the Washington Post, the Department of Homeland Security compiled intelligence reports on two journalists who published a leaked F.B.I. memo, an action usually reserved for terrorists and other violent suspects.

The information in the memo, dated July 16 and marked unclassified, contained a disclaimer prohibiting distribution. The specific journalists, the New York Times’ Mike Baker and Lawfare’s Benjamin Wittes, seem to have been targeted for federal surveillance for sharing the document.

The memo from the Office of Intelligence and Analysis states their assessment showed “sustained violence against government personnel and facilities in Portland, Oregon since May” is due to an “enduring threat environment in the region since at least 2015.”

However, the office admits “low confidence” in their own assessment because they “lack insight into the motives for the most recent attacks.” The memo does not mention racial injustice or police brutality, common themes of daily protests nationwide.

Acting DHS secretary Chad Wolf said through a spokesperson that he did not condone the collection of intelligence on Baker and Wittes and “immediately ordered an inquiry into the matter.”

Acting Undersecretary for the Office of Intelligence and Analysis Brian Murphy was removed from his position at Wolf’s suggestion. Murphy has been reassigned to a supportive role in the department’s administration.

Wolf’s actions as secretary show little concern for freedom of speech or other individual civil rights, though. He has helped command the violent response to peaceful protesters in Portland, including detainment by unidentified men who force dissenters, sometimes journalists, into unmarked vehicles.

After being honored by family and former presidents, civil rights hero John Lewis was buried in Atlanta, Georgia on Thursday. Lewis passed away from pancreatic cancer on July 17.

As part of the original group of Freedom Riders who set out in 1961 to non-violently protest segregation in Southern states, Lewis and fellow activists were frequently attacked and brutalized by mobs for attempting to enter areas reserved for whites. The group’s efforts eventually brought about action in the form of prohibition of segregation in interstate terminals.

Lewis was then part of the 1965 peaceful march in Selma, Alabama to illuminate prejudicial voter registration practices. During the event, which became known as Bloody Sunday due to the response from Alabama state troopers, Lewis was hit over the head with a nightstick, fracturing his skull and leaving him with a noticeable scar.

The violence against protesters in Selma did not go unnoticed, and the Voting Rights Act of 1965 was soon passed, outlawing practices meant to discriminate against Black voters.

Lewis was known to urge “good trouble” in the form of protest and carried the fight for civil rights to Congress, serving as a Georgia Democrat in the U.S. House of Representatives for more than three decades prior to his death.

President Donald Trump did not attend Lewis’ funeral and publicly stated he had no intention to pay respects while Lewis’ body was laid in state at the U.S Capitol.

Trump suggests an election delay due to mail-in voting

Pres. Trump used Twitter to claim the 2020 election will be “the most inaccurate and fraudulent…in history” due to mail-in voting and should be delayed until “people can properly, securely and safely vote.”

With no expert evidence to back Trump’s claim, even supporters have condemned the suggestion. Steven Calabresi of the conservative Federalist Society called for Trump’s “immediate impeachment again by the House of Representatives and his removal from office by the Senate” in a New York Times opinion piece.

Prominent Republican lawmakers, including Senate Majority Leader Mitch McConnell and House Minority Leader Kevin McCarthy, have dismissed Trump’s claim, pointing out that a federal election has never been delayed in all of U.S. history. McConnell plainly stated when asked, “we will find a way” to vote on November 3.

Hong Kong Chief Executive Carrie Lam announced on Friday that legislative elections in Hong Kong will be delayed for a year due to concerns for “public safety and the health” of residents during the coronavirus pandemic.

Though Hong Kong has faced a resurgence in cases, many critics believe Lam is delaying the elections on behalf of Beijing authorities in order to further limit the self-governance of Hong Kong.

White House Press Secretary Kayleigh McEnany condemned “the Hong Kong government’s decision to postpone for one year its Legislative Council elections,” in spite of Trump’s own suggestion to delay U.S. elections only a day before.