Media oversimplifies Berkeley rally: It wasn’t about Trump, it was about Fascism 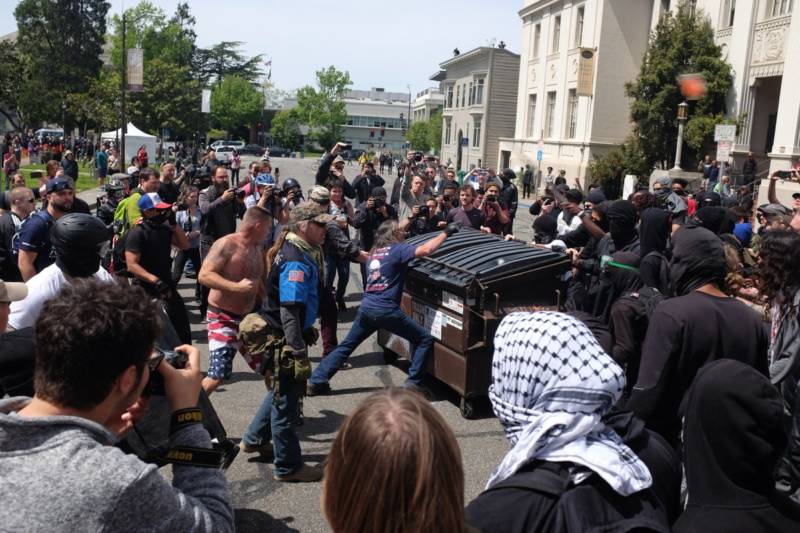 Tax day was marked around the country this year as a day of mostly peaceful protests against President Trump and his refusal to release his tax returns, with one violent exception – Berkeley California.

CNN, the Los Angeles Times, and the Washington Post described the rally which occurred on April 15th as a clash between pro-Trump and anti-Trump demonstrators.

However, this is an oversimplification of what was behind the event.

The violence, which resulted in 21 arrests and 11 injuries, was not because of Trump nor was it about his tax returns. Rather, the conflict was the result of a rally set up by white nationalist groups called “Patriots Day” and the counter-protests that arose from it.

There were two opposing sides that made up the rally, each representing the extremes of the right and left.

There was an anti-fascist movement (“Antifa”) – which is a movement dedicated to resisting, by all means, necessary (including violent) what they consider an inherently violent worldview of fascism. The Antifa make up a broad conglomeration of self-described anarchists and black bloc disrupters at alt-right events, including at Trump’s rallies and the inauguration. Their presence at the Berkeley rally was to oppose the far-right group.

Opposite the extreme-left Antifa is the far-right fascists, who alleged that their purpose for the rally was to express their freedom of speech and vocalize their racist beliefs. The group proclaims white’s racial superiority, hatred of minorities, and flashing the nazi salute.

Stating that the rally was a Trump – Anti-Trump rally is, therefore, an oversimplification as the primary purpose circled around the ideology of fascism.

And both groups clashed violently.

Although those in the white supremacists/alt-right group found a voice in Trump, their movement predates his presidency and is about something more, which is a belief that America belongs to the white race.

Trump’s rhetoric gave the white nationalism and fascism an outlet and the group experienced a resurgence in the wake of Trump’s candidacy, and this resurgence has led to an equally impassioned Antifa.

While President Trump’s election and support may be a symbolic wedge that can be oversimplified as a clash between Trump supporters and resisters, a closer look shows a widening divide between two warring philosophies that both see themselves as victims of injustice.

One notable event at the rally involved Nathan Damigo, who was captured on film running up to Louisa Rosalma, one of the anarchist protestors, and sucker punching her in the face.

Damigo is an ex-military, ex-convict who helped found the now-defunct National Youth Front, the youth wing of the nationalist American Freedom Party and the white nationalist group Identity Evropa, which posts flyers around college campuses nationwide with slogans such as “Let’s Become Great Again” and “Protect Your Heritage,” according to the San Diego Union Tribune.

Louisa, 20, later described her experience at the riot:

“After getting hit by Damigo, I was punched and thrown down by two others while they tried to get my skull to land on the rocks in the planter,” Rosealma told teleSUR. “Afterward, another guy held me by the shoulders and kneed me in the face a few times.”

Cal State Stanislaus, where Damigo is a student, announced they were going to investigate the incident:

“The university has zero tolerance for the use of violence and we will take all of the necessary legal and disciplinary measures to ensure that all students and everyone on campus have a safe and secure environment,” Cal State Stanislaus President Ellen Junn said in a statement Sunday.

Alt-right websites, like VDare, defended Damigo, calling the reports “fake news” and said that Damigo was “fighting back against a masked, dreadlocked young woman who was part of the Antifa rioters.”

Watching the video, it appears as though the attack by Damigo was unprovoked.

Since the beginning of the Trump Campaign, there has been an uptick in violence both by white supremacists and the Antifa. At a campaign rally in Louisville, Kentucky on March 1, 2016, a white nationalist, Matthew Heimbach, is being sued for assaulting an African-American protester.

Recently, Heimbach has defended himself, claiming that he “acted pursuant to the directives and requests of Donald J. Trump and Donald J. Trump for President” and that, if he’s found liable for damages, “any liability must be shifted to one or both of them.”

In another incident, leader of the alt-right (and coiner of the term “alt-right”), Richard Spencer was punched during a live interview at Trump’s inauguration in January, and Antifa members set fires and broke windows at a Milo Yiannpoulos speech also in Berkeley, California.

Although it’s easier to describe the rally in California as a clash between Trump supporters and those in opposition, it’s important to understand the full extent and reasons behind the event.

The event underscores the fact that within the population of those who voted for Trump, there exists an even more extreme faction that is energized by Trump’s anti-immigrant policies and racist rhetoric. Groups with this ideology, hateful speech and violent behavior have existed forever, and it’s unlikely they will change.

But what can change is our response to hate. For groups that oppose Trump – including moderates and the far-left, violent protests aren’t the solution and they undermine the mission and message.

To be fair, it is understandable that there would be an impassioned and feverish response to a protest involving a group that holds such abhorrent beliefs. But violent protests aren’t productive and they divert from the message.