Trump Feud With Congresswoman As Sgt. La David Johnson Is Laid To Rest 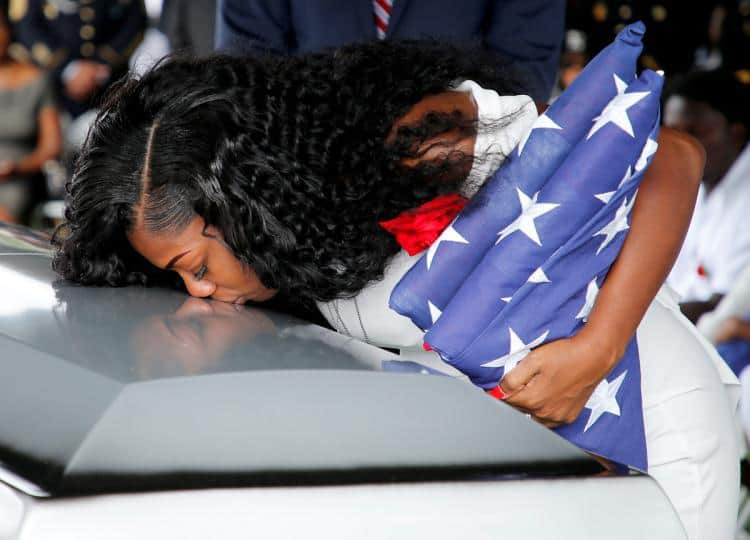 Yesterday President Donald Trump continued grumbling by calling the Democratic Congresswoman  Wilson “wacky” in response to her critical account of their conversation with the wife of the fallen U.S. Soldier Sgt. La David Johnson.

“I hope the Fake News Media keeps talking about Wacky Congresswoman Wilson in that she, as a representative, is killing the Democrat Party!” Trump tweeted just after 8 a.m. ET on Saturday, referring to Rep. Frederica Wilson, D-Florida.

An hour later, delving into an unrelated past controversy involving the Obama administration’s approval of Russia’s purchase of a controlling stake in a Canadian company with US uranium assets, Trump pressed on with his attacks against Wilson by re-tweeting posts that suggested without evidence that former President Barack Obama and former Secretary of State Hillary Clinton “rolled out” Wilson “as a distraction.” The company, at one time, included investors who had contributed to the Clinton Foundation.

“The people get what is going on!” Trump tweeted. He continued using the nickname in another tweet Sunday.

Wacky Congresswoman Wilson is the gift that keeps on giving for the Republican Party, a disaster for Dems. You watch her in action & vote R!

Trump’s phone call controversy with the widow of Sgt. La David Johnson, who was killed in an ambush in Niger, continues to overshadow questions about the death of Johnson and three other US soldiers who were killed as a result of the ambush.

Wilson, who was in the car with Johnson’s family when Trump’s call came, was the first to reveal details, saying that Trump said Johnson “knew what he signed up for, but I guess it still hurts.” The family member who raised Johnson called Wilson’s account of the call “very accurate.”
The White House has not refuted that Trump spoke those words.

White House chief of staff John Kelly, a Gold Star father, inserted himself into the narrative on Thursday indicating he advised Trump to offer those words, though he said he was enraged Wilson decided to share details he thought to be a “sacred” conversation.

Friday in an interview with Fox Business, Trump said he was “very surprised” to hear Wilson’s account of the call, insisting it was “a very nice call” and asserting he did mention Johnson’s name, which Wilson said he did not appear to recall during the phone call.

“Look, I’ve called many people. And I would think that every one of them appreciated it,” Trump said, noting “those are the toughest calls.”