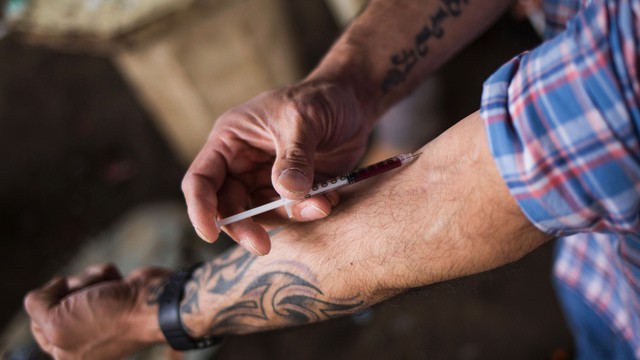 Trump intended to use an afternoon speech to announce that he was directing his health department to take that step, according to the officials, who weren’t authorized to publicly discuss the matter in advance and briefed journalists on condition of anonymity.

Administration officials said they would urge Congress, during end-of-the-year budget negotiations, to add new cash to a public health emergency fund that Congress hasn’t sent money to for years. They made clear that the declaration, which lasts for 90 days and can be renewed, comes with no dedicated dollars.
“An emergency declaration without significant new funds will likely be unsuccessful,” Becky Salay, director of government relations at Trust for America’s Health, a Washington-based public health research and advocacy organization, said in advance of the president’s announcement. “The problem is enormous and requires a similar investment in a comprehensive strategy that includes primary prevention.”

Leading up to the declaration, Trump had said he wanted to give his administration the “power to do things that you can’t do right now.” As a candidate, he had pledged to make fighting addiction a priority and pressed the issue in some of the states hardest hit.

“When I won the New Hampshire primary, I promised the people of New Hampshire that I would stop drugs from pouring into your communities. I am now doubling-down on that promise, and can guarantee you – we will not only stop the drugs from pouring in, but we will help all of those people so seriously addicted get the assistance they need to unchain themselves,” Trump told a crowd in Maine weeks before last November’s election.

Once in office, Trump assembled a commission, led by Gov. Chris Christie, R-N.J., to study the problem, and he said an emergency designation would free up additional money and resources, though some advocates wondered whether that was enough.

Christie, in a statement, said Trump was taking “bold action” that shows “an unprecedented commitment to fighting this epidemic and placing the weight of the presidency behind saving lives across the country.”
At a congressional hearing Wednesday, lawmakers from both parties expressed frustration during questioning of administration officials about federal spending to fight the crisis.

“I don’t understand why more resources aren’t flowing to help out a rural state like West Virginia,” said Rep. David McKinley, R-W.Va.
Added Rep. Ben Ray Lujan, D-N.M.: “People at home don’t feel like they’re getting help.”
Some health advocates worried that devoting more public health resources to opioids could divert attention and resources from cancer, diabetes, heart disease, and other health concerns. They were looking for new sources of money and willingness for Washington to work closely with state and local governments.

Nearly a year ago, Congress approved a $1 billion to tackle the crisis. Money is gradually reaching places where it can do some good, but with some setbacks and delays along the way.
In some locations, addicts are starting to get treatment for the first time. In others, bureaucratic hurdles prevent innovation, driving home the point that gaining ground on the epidemic will be difficult.
The $1 billion for states is part of last year’s 21st Century Cures Act, which also addressed cancer research and medical innovation.

“It is a great opportunity, but it comes with a lot of angst,” said Tom Hill of the nonprofit National Council for Behavioral Health, which advocates for addiction treatment providers. States have analyzed data, chosen contractors and are “just getting programs up and running right now.”
After months of promising to take sweeping action to combat opioids, Trump will use an event at the White House on Thursday to declare the crisis a public health emergency, White House officials told reporters.