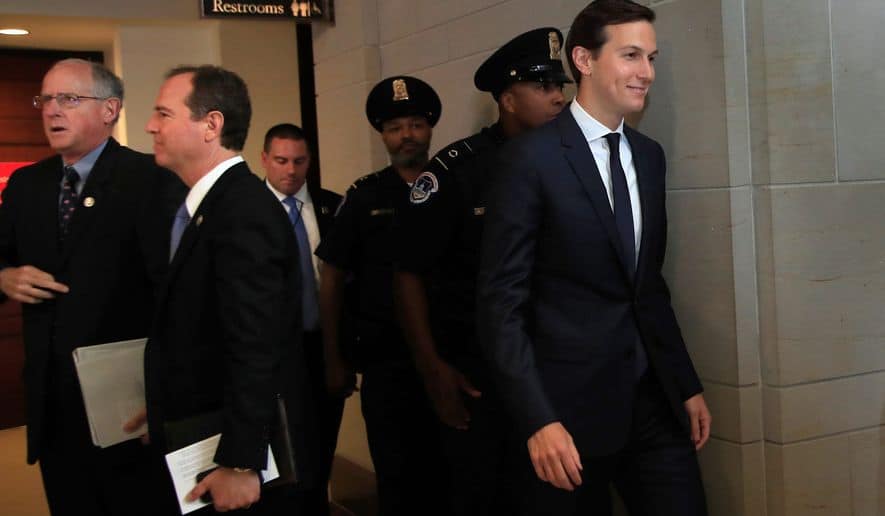 Senate Judiciary Committee Chairman Sen. Chuck Grassley (R-Iowa) and ranking member Dianne Feinstein (D-Calif.) wrote a letter to Jared Kushner’s lawyer Thursday. The letter stated that President Trump’s son-in-law and senior adviser did not give the panel’s investigators emails he received and forwarded to WikiLeaks and a “Russian backdoor overture and dinner invite.”

In their letter to Abbe Lowell, Grassley and Feinstein demand that Kushner turn over “several documents that are known to exist,” based on testimony from other witnesses. Those documents include “September 2016 email communications to Mr. Kushner concerning WikiLeaks” and “documents concerning a ‘Russian backdoor overture and dinner invite.'” They also said Kushner has not “produced any phone records that we presume exist and would relate to Mr. Kushner’s communications” and asked for records of his communications to and about former National Security Adviser Michael Flynn. The committee gave Kushner until Nov. 27 to fulfill the request.

The White House senior advisor told congressional Russia investigators he did not communicate with WikiLeaks and did not recall anyone on the Trump campaign who did. However, Kushner did receive and forward an email from Donald Trump Jr. about the contact he had with WikiLeaks, according to a new report and letter from the Senate Judiciary Committee.

During his closed-door congressional hearing in July, Kushner was asked if had any contact with WikiLeaks or its founder Julian Assange. He responded that he had not, nor did he know of anyone on the campaign who had contacted WikiLeaks.

“Mr. Kushner was asked if he had contacts with Wikileaks, Guccifer or DC Leaks and said no. He also said he did not know of such contacts by the campaign. From all I have now seen, his statement was accurate then as it is now. In over 6 hours of voluntary testimony, Mr. Kushner answered all questions put to him and demonstrated that there had been no collusion between the campaign and Russia.”

Trump Jr. emailed Kushner and other senior officials on the campaign telling them WikiLeaks had made contact the same day he received the first Twitter direct message about an anti-Trump PAC, according to The Atlantic. Kushner forwarded that email to campaign spokeswoman Hope Hicks, who is now White House communications director.

The contents of Trump’s Jr.’s email to Kushner and others are not known.

When Kushner went before the House and Senate Intelligence Committees, the committees investigating 2016 Russian election meddling had not yet been provided with the documents referenced in the Senate Judiciary Committee letter, according to a source familiar with the matter.

Kushner’s lawyer responded on Thursday to the letter from Grassley and Feinstein insisting Kushner has been “responsive to all requests.”

“We provided the Judiciary Committee with all relevant documents that had to do with Mr. Kushner’s calls, contacts or meetings with Russians during the campaign and transition, which was the request,” attorney Abbe Lowell said in the statement.

Kushner publicly released a lengthy opening statement when he testified that said he had “no “There are several documents that are known to exist but were not included in your production,” Grassley and Feinstein wrote.A Senate Intelligence Committee spokeswoman declined to comment, and a House Intelligence Committee spokeswoman did not respond to a request for comment.improper contacts.”

“I did not collude, nor know of anyone else in the campaign who colluded, with any foreign government,” Kushner said in the statement.

The Senate Judiciary Committee’s letter to Kushner seeking missing documents stems from a request the committee made to Kushner last month to provide materials connected with a range of officials and events, including the efforts by WikiLeaks and others to “obtain, disclose, or disseminate ‘hacked’ emails.”