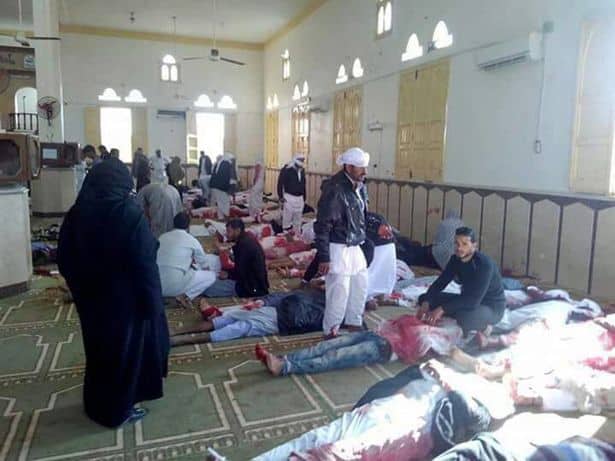 Thought to be the deadliest attack on Egyptian soil, 235 reported dead and as many as 109 wounded in a Sufi mosque bombing. After detonating a bomb, militants then sprayed gunfire on panicked worshippers as they fled.

The al-Rawdah mosque was attacked by extremists in the town of Bir al-Abd, 40 km from the North Sinai provincial capital of el-Arish, opening fire from four off-road vehicles on worshippers during the sermon, three police officers said. As worshipers fled, they were confronted with a group of gunmen who, witnesses said, had pulled up outside.

Some of the gunmen rushed into the mosque, where they opened fire on the worshipers. Others waited outside, picking off those who had managed to flee. Some gunmen lingered at the scene even as emergency workers arrived to treat the wounded, opening fire on several ambulances, Ahmed el-Ansari, a senior government health official, said on state television.

“The scene was horrific,” said Ibrahim Sheteewi, a resident of Bir al-Abed, the north Sinai town where the attack took place. “The bodies were scattered on the ground outside the mosque. I hope God punishes them for this.”

A Sinai police officer said the dead included at least 15 children. A witness put the toll even higher, saying he had helped gather the bodies of 25 children.

Many were taken to the general hospital in the central northern Sinai town of El Arish, where medics described chaotic scenes as staff struggled to deal with a flood of dead and wounded. “They pretty much have bullets in every part of their bodies,” said one medical official, speaking by phone. Others had extensive burns or limbs lost from the explosion.

President Trump, writing on Twitter, denounced the attack as a “horrible and cowardly.” In a later tweet, he said the attack explains why the United States needs a border wall with Mexico and restrictions on immigration, which he referred to as “the ban.”

Horrible and cowardly terrorist attack on innocent and defenseless worshipers in Egypt. The world cannot tolerate terrorism, we must defeat them militarily and discredit the extremist ideology that forms the basis of their existence!

The United Nations Security Council, in a statement, condemned the “heinous and cowardly terrorist attack.” The United Nations secretary general, António Guterres, called for those responsible “to be swiftly brought to justice.”

No group has claimed responsibility for the attack, but the Egyptian military has been battling an Islamist militia in Sinai called Ansar Beit al-Maqdis. The group pledged allegiance to the Islamic State in 2014 and has since proved to be one of the Islamic State’s most effective local affiliates. The group’s deadliest attack targeted a Russian jetliner that crashed shortly after takeoff from Sharm el-Sheikh in October 2015, killing all 224 people on board.

“The armed forces and the police will avenge our martyrs and restore security and stability with the utmost force,” Egypt’s President Abdel Fattah al-Sisi said in a televised address.

“What is happening is an attempt to stop us from our efforts in the fight against terrorism, to destroy our efforts to stop the terrible criminal plan that aims to destroy what is left of our region.”

Egypt later said it would delay the opening of the Rafah border crossing to Gaza after the attack due to security concerns. The passage had been due to open for three days beginning on Saturday.

Striking at a mosque would be a change in tactics for the Sinai militants, who have usually attacked troops and police and Christian churches.