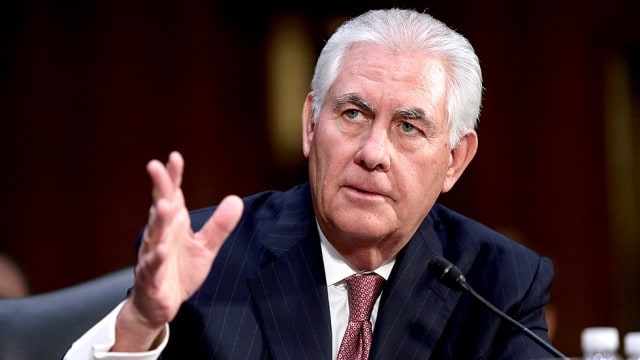 The US Secretary of State Rex Tillerson changed course on North Korea today, walking back an offer to meet representatives of the reclusive state with no preconditions.

Speaking at the United Nations Security Council on Friday, Rex Tillerson warned that “North Korea must earn its way back to the table” before the US was willing to hold talks. He said the North Koreans would have to cease threatening acts (like conducting nuclear and missile tests) before the US was ready for talks.
The Secretary of State also stressed that the US was ready to “take any necessary measures” to defend itself against possible attacks from North Korea. But he added, “We have been clear that all options remain on the table in the defense of our nation, but we do not seek, nor do we want, war with North Korea.

Tillerson’s Security Council speech was a seeming reversal of remarks he made at the Atlantic Council on Tuesday, when he said, “We are ready to have the first meeting [with North Korea] without precondition. Let’s just meet, and we can talk about the weather if you want.”
That speech had sparked confusion since it seemed to contradict President Trump’s position on North Korea. The White House has made it clear that it will not talk to North Korea until the country ceases its “provocative behavior”, and many wondered why Tillerson’s position seemed at odds with that of President Trump.

A seemingly chastised Tillerson told reporters Friday that President Trump’s position is very clear” and that “there is no daylight” between his position and the official White House stance.

During the Security Council meeting, Tillerson name-checked China and Russia, calling them out for supporting North Korea financially and enabling the Hermit Kingdom’s nuclear program. He said that China continues to sell North Korea crude oil, while Russia continues to hire North Korean laborers. The Security Council has called for an end to North Korea’s practice of sending their citizens to work overseas since the workers’ wages are paid directly to the government and may be used to finance the country’s nuclear program.

“Continuing to allow North Korean laborers to toil in slave-like conditions inside Russia in exchange for wages used to fund nuclear weapons programs calls into question Russia’s dedication as a partner for peace,” Tillerson said today.
He added, “as Chinese crude oil flows to North Korean refineries, the United States questions China’s commitment to solving an issue that has serious implications for the security of its own citizens.”

Russia’s ambassador replied tartly that the laborers are not working under “slave-like conditions” at all; he said he was looking forward to hearing Mr. Tillerson’s constructive suggestions for a solution to the North Korean crisis.

China’s ambassador apparently piqued, said that China was leading the charge to right the situation in North Korea. “China has made greater efforts and paid a higher price than anyone else [to solve the problems on the Korean peninsula],” he said. “It is irresponsible to challenge what China has done.”

The Security Council meeting concluded with no major outcome.