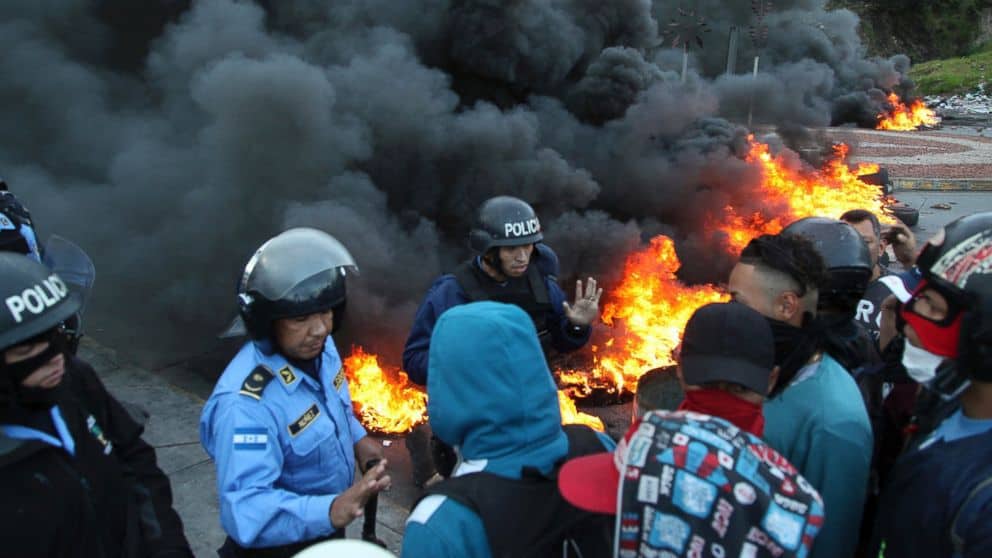 Opposition protesters in Honduras blocked roads and set fire to buildings and vehicles on Monday, in a show of rage against the outcome of the country’s presidential election.

On Sunday morning, Honduras’s electoral commission declared that President Juan Orlando Hernandez had officially won re-election. But international observers – including the European Union and the Organization of American States –said the election was hopelessly riddled with fraud and should be invalidated.

On Sunday evening, the OAS called for new elections, arguing that there had been so many irregularities in the original vote that no winner could be declared. Among other things, the OAS said there were “deliberate intrusions” into the voting machines, and that ballot boxes had been opened improperly.

The Alliance Against Dictatorship, the opposition party, immediately called on its members to take to the streets. The opposition candidate, Salvador Nasralla, is heading to Washington DC to meet with the US State Department and representatives of the OAS.

On Sunday and Monday, supporters of Nasrallah blocked the highways and roads around Tegucigalpa with burning tires. Banks, schools, and businesses closed in the capital and other cities. There were reports of looting in San Pedro Sula, where protesters also reportedly set fire to a bank and a city bus.

Police fired tear gas into the crowds of protesters, but to little avail. Jair Meza, a spokesman for the national police, said there were roadblocks throughout the country; he said that as soon as police unblocked one road, protesters quickly blocked up another one nearby.

Manuel Zelaya, the populist leader who was ousted in a military coup in 2009, vowed that the opposition would never accept Hernandez as president.

“We totally reject the declaration of the Supreme Electoral Tribunal,” Zelaya declared. “The people recognize Salvador Nasrallah as their president.”

Meanwhile, President Hernandez denounced the OAS for provoking violence in the country.

Hernandez is a member of the conservative National Party. He first came to power as the president of the national legislature in 2010, just after the coup that toppled Zelaya in 2009. Hernandez is the first president to be re-elected since Honduras returned to democratic rule in 1980.

There has been a series of protests and violent clashes in Honduras since the presidential election on November 26. Human rights groups say 22 people have been killed since the election.

The National Front has not celebrated its victory publicly. This may be in part because of President Hernandez’s sister, Hilda, died in a helicopter crash near Tegucigalpa on Saturday night. The helicopter crashed into a mountain in the Reserva Biologica Yerba Buena. The other five passengers aboard were also killed.

Salvador Nasralla, the opposition leader, is a sports reporter and a businessman who once served as CEO of Pepsi Honduras. He first ran for president in 2013 and ran again in 2017.