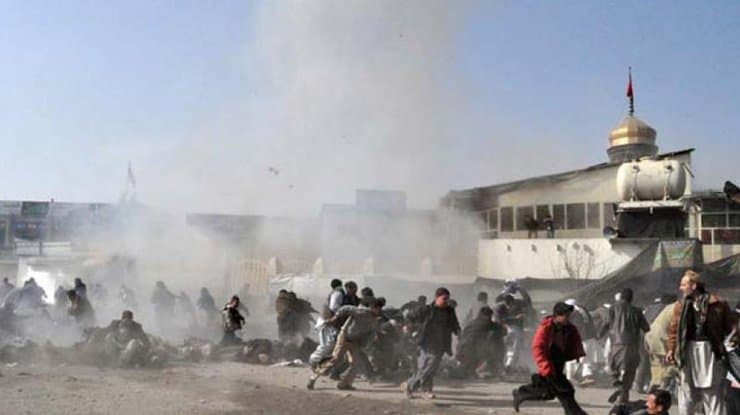 A savage attack on a two-story Shiite Muslim Cultural center occurred around 10:30 a.m. (12:00 a.m. ET) on Thursday leaving 41 people dead in Afghanistan’s capital of Kabul. According to the health ministry, the attack left 84 people injured, mostly from burns. Among the dead are two children.

Isis claimed responsibility for the attack in an online statement.

An Afghan News agency located on the floor above was also taken out in the blast according to the Interior Ministry spokesman, Nasrat Rahimi who said, two more explosions followed at the same building but caused no injuries.

The attack occurred during a morning panel discussion on the anniversary of the Soviet invasion of Sunni-majority Afghanistan at the Tabian Social and Cultural Centre, witnesses said.

The floor of the center, at the basement level, was left covered in blood as weeping survivors and relatives picked through the debris.

“We were shocked and didn’t feel the explosion at first, but we saw smoke coming up from below,” said Ali Reza Ahmadi, a journalist at the agency who was sitting in his office above the center when the attack occurred.

“Survivors were coming out. I saw one boy with cuts to his feet and others with burns all over their faces,” he said. “About 10 minutes after the first explosion, there was another one outside on the street and then another one.”

“There were reading and an academic discussion and then there was a huge bang,” said Sayed Jan, a participant in the conference, from his bed in the hospital.

“I felt my face burning, and I fell down and saw other colleagues lying around me and smoke everywhere.”

The bloodshed followed last months attack on a private television station in Kabul which was also claimed by the local affiliate of Islamic State.

Taliban spokesman Zabihullah Mujahid issued a statement on Twitter denying involvement in the attack, which was condemned by both the Kabul government and Afghanistan’s international partners including NATO and the United Nations.

ISIS and the Taliban have both executed several attacks in the country this year, maintaining their fight over territory, particularly in the east of the country. The Taliban earlier denied responsibility for the blasts.

Before Thursday’s assault at least 12 attacks on Shi‘ite targets have happened since the start of 2016, killing or wounding almost 700 people, according to United Nations figures.

October 21: A suicide bombing near a military academy killed another 15 people, claimed by the Taliban.

October 17: Approximately 41 soldiers were killed in an attack on their base in eastern Afghanistan, claimed by the Taliban.

September 13: A suicide bomber killed three people in a blast outside a cricket stadium in Kabul.

August 25: 20 people killed in an attack on a Shiite mosque, for which ISIS claims responsibility.