As the World Watches, Iran Protests 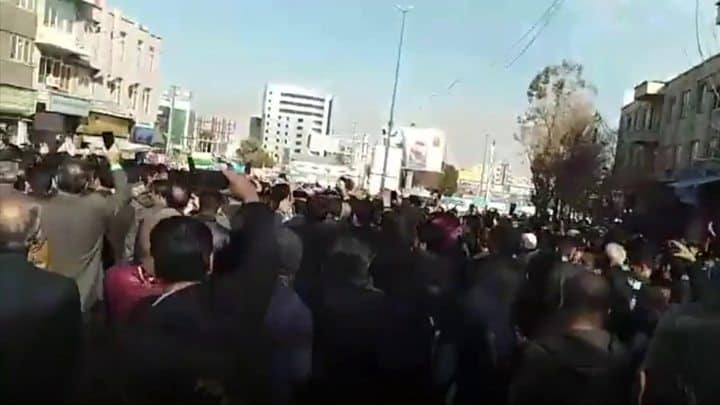 Nearly 2,000 Iranian, pro-government supporters gathered for a peaceful, anti-government protest on Saturday, in support of the government’s policies, according to eyewitnesses.

Demonstrators were broadcast on the state-run Iranian network; waving flags at the pro-government rally, which had been scheduled before the anti-government protest broke out.

Protestations spread to many cities as government supporters also turned out at other demonstrations according to the official Iranian news agency IRNA. The rallies were organized to commemorate mass demonstrations held in 2009 in efforts to challenge pro-reform protests staged that year.

Coverage of the anti-government protests was limited to state-run media, which reference them only in passing.

Described as the most massive public display of discontent since the 2009 Green Movement in Iran — the protests have emerged against a backdrop of rising food and gasoline prices.

Some arrests have been reported in Iranian media.

“The police and security forces have tried to manage conditions. We have received reports of calls to gather, cyber and social media based, and such calls and any gatherings resulting therefrom, are certainly illegal,” he said.

Pushing back against The Iranian Foreign Ministry pushed back Saturday against US comments in support of anti-government protesters that urged respect for their rights, warning Tehran — the “world is watching.”

A statement posted on the Foreign Ministry website said the Iranian people gave no credence to such “opportunistic” remarks by U.S. President Donald Trump or his administration and described “Mr. Trump’s government” as the primary source of ill will toward Iran.

On Thursday, demonstrations in the northeastern city of Mashhad prompted protests that spread to cities across the nation on Friday and were documented in Tehran, Kermanshah, Arak, Qazvin, Khorramabad, Karaj, and Sabzevar, according to First Vice-President Eshaq Jahangiri, and cited by IRNA.

Voicing support for the anti-government protesters, “there are many reports of peaceful protests by Iranian citizens fed up with the regime’s corruption and its squandering of the nation’s wealth to fund terrorism abroad,” said White House press secretary Sarah Sanders. “The Iranian government should respect their people’s rights, including their right to express themselves. The world is watching.”

In a statement earlier Friday, the US State Department urged the international community to support the Iranian people’s “demands for basic rights and an end to corruption.”

“Iran’s leaders have turned a wealthy country with a rich history and culture into an economically depleted rogue state whose chief exports are violence, bloodshed, and chaos,” said spokeswoman Heather Nauert. “As President Trump has said, the longest-suffering victims of Iran’s leaders are Iran’s people.

The relationship between Washington and Tehran is currently tense, with the Trump administration critical of what it sees as Iran’s growing regional influence and alleged involvement in conflicts including Yemen and Syria.

After campaigning mainly on social reform, Rouhani won a landslide re-election in May. His campaign also touted the merits of the 2015 nuclear deal with the United States, the European Union and other partners which have been rejected by Trump.

Iranian officials have pointed to foreign intervention as being behind the anti-government protests.

“Unfortunately, most of the people who participate in these gatherings are unsophisticated individuals who are not aware that these calls for protest are made by anti-revolution elements,” Mohsen Hamadani, Tehran deputy governor in charge of security affairs, was quoted as saying by the semi-official news agency ILNA.

“Most participants are not aware that anti-revolution elements are calling people to demonstrate social issues such as inflation but chant untrue slogans.”

Some protesters were temporarily arrested for participating in “illegal demonstrations,” according to Hamadani, who said the demonstrators had not officially applied for permits to demonstrate.

While sanctions against Iran were eased under the 2015 deal in exchange for curbs on Tehran’s nuclear program, US sanctions imposed over non-nuclear activities continue to have an impact.